Vinny Maddalone to be roasted by Ring 8 this Thursday night 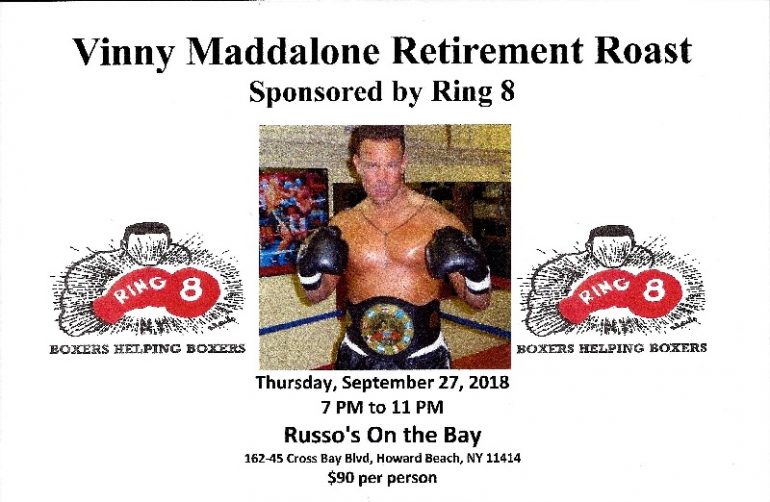 Retired heavyweight Vinny Maddalone. A roast dedicated to his career will be hosted by the Ring 8 organization on Thursday, September 27, 2018.
26
Sep
by Joseph Santoliquito

However Maddalone, who hasn’t fought since 2013, hasn’t faced anything close to the poking and jabbing he’ll receive Thursday night, when Ring 8, a nonprofit organization located in New York City, celebrates Maddalone’s career with a roast at 7 p.m., at Russo’s on the Bay, in Howard Beach, New York. Ring 8 was founded in 1954 by ex-prizefighter Jack Grebelsky to help indigent former professional boxers in need of financial assistance, including housing, medical care and funeral related expenses. (More information is available via this link for those interested.)

Maddalone has always been able to take a shot. He’ll have the verbal blows coming at him in front of a crowd that’s expected to be close to 300 strong.

“I’m not going to be bobbing and weaving through this,” laughed Maddalone, who faced Evander Holyfield, Al Cole, Jean Marc Mormeck, Tomasz Adamek and a rising Tyson Fury (in July 2012) throughout his career. “This is a great honor by all of these people and it involves the great sport that I love and that’s boxing. I’m going to take my punishment and take these shots straight.

“I’ve been working with the Steamfitters Union for the last couple of years and they’re taking care of me, said Maddalone. “I’m working with a group that’s supporting a kid, (junior welterweight) Danny Gonzalez, who’s 17-1 (with 7 KOs) right now. We’re trying to move him along. He’s a great, humble kid who deserves a chance. We’re doing some good things right now.”

Jack Hirsch, president of Ring 8, decided to honor Maddalone, who is on the Ring 8 Board of Directors.

“We wanted to wait until Vinny was retired and, once we got the commitment, now we could send him out in style,” Hirsch said. “This thing has really taken off. We have over 240 tickets already sold and Vinny fought five world champions and he was in against the best and always gave an honest effort.

“He had a heck of a career and Vinny deserves to be remembered.”