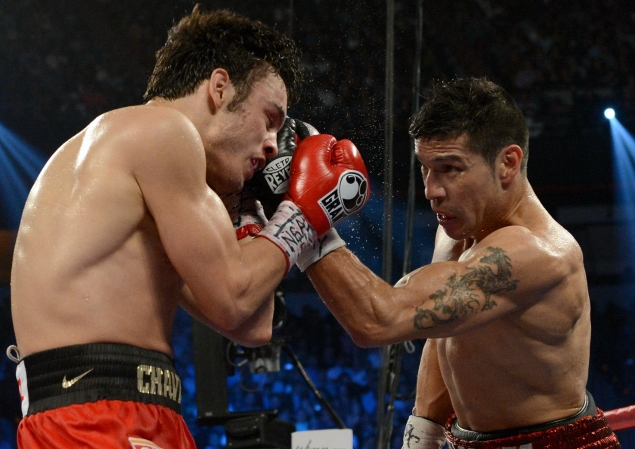 Sergio Martinez is returning to the ring, and it looks like he’ll do so against a familiar foe.

When they met in 2012, Maravilla was cruising to a shutout decision victory over Julio Cesar Chavez Jr. until the Mexican knocked him down in Round 12 and almost stopped him. Six years later, with Martinez now 43 and retired for four-plus years, advanced talks are underway for a rematch of their middleweight championship bout, sources told The Ring.

The proposed fight would take place eight pounds north at super middleweight, and is being pegged for November 17 in either Las Vegas or somewhere in Texas, according to sources. Eddie Hearn’s Matchroom Sport would promote and stream the fight on DAZN.

Martinez (51-3-2, 28 knockouts) hasn’t competed since he lost his Ring middleweight championship to Miguel Cotto via stoppage in 2014. The Argentine underwent multiple surgeries to repair a torn meniscus suffered against Chavez, and the injury flared up against Cotto. Martinez could barely walk, let alone box, but he’s insisted to people close to him that the knee is now 100 percent.

He would have been a strong contender for entrance into the International Boxing Hall of Fame in his first year of eligibility on the ballot, 2019, but that clock will be reset once he returns to the ring.

Chavez, whose legendary father won titles in three weight classes, hasn’t stepped in the ring since a disappointing performance against Canelo Alvarez in May 2017. The 32-year-old former middleweight titleholder battled drug addiction and has returned to rehab since the defeat.

It amounts to a novelty matchup pitting two name guys who are no longer relevant, a staple of boxing since the beginning of time.