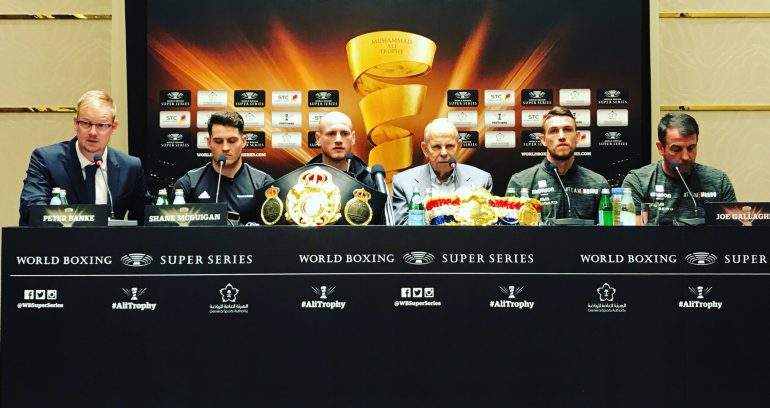 JEDDAH, Saudi Arabia – There can be only one.

The 12-round bout will take place at the King Abdullah Sports City in Jeddah, Saudi Arabia.

Groves, who is rated No. 1 by The Ring, reached the final of the tournament after knocking out Jamie Cox and outpointing Chris Eubank Jr. The London-born boxer-puncher has been in the best form of his life, although he did suffer a badly dislocated shoulder in the closing round of his victory over Eubank.

“After a lot of rehab, the shoulder’s working,” said Groves (28-3, 20 knockouts). “It took a while to get to full fitness, but we’re ready to fight. I’m looking forward to winning some new belts and a new trophy.

“The Ring Magazine belt, the WBC diamond belt and the Ali trophy are at stake. I want to make sure I win (the tournament) and it would be the pinnacle of my career so far.”

Acclaimed coach Shane McGuigan took Groves to the WBA super middleweight title, courtesy of a sixth-round stoppage of Fedor Chudinov, in May 2017, and masterminded what was arguably his career-best performance over Eubank in February.

“Callum is a much better fighter than Chris Eubank Jr.,” acknowledged McGuigan candidly. “But we’ve been sparring tall fighters and we’re prepared for it.

“George had a couple of setbacks early on and he’s picked himself up from those losses. To see him get the Ring Magazine belt would be the icing on the cake for me.”

Smith, who is rated No. 3 at 168 pounds, earned his spot after a brace of unanimous decision victories over Erik Skoglund and Nieky Holzken. The Liverpool man is unbeaten and has waited a long time for his moment in the sun.

“Every boxer dreams of fighting for a world title and I’m here now,” said Smith (24-0, 17 KOs). “A win makes me world champion, Ring Magazine champion and the Ali trophy winner – it ticks a lot of boxes for me.

“It’ll take a big performance and it’s not going to be easy, because you need to earn world titles. But I’m 100 percent ready, physically and mentally, to fight.”

The Ring Trainer of the Year for 2015, Joe Gallagher, has had world title success in recent years but acknowledges that a Smith victory would be very special.

“I’m extremely proud of Callum,” said Gallagher. “We’re fighting the best super middleweight in the world, so we’d be considered the best fighter in the division.

“This is Callum’s opportunity and it’s his chance to shine. George has power and both hands but so has Callum Smith. We’re excited and ready to go.”