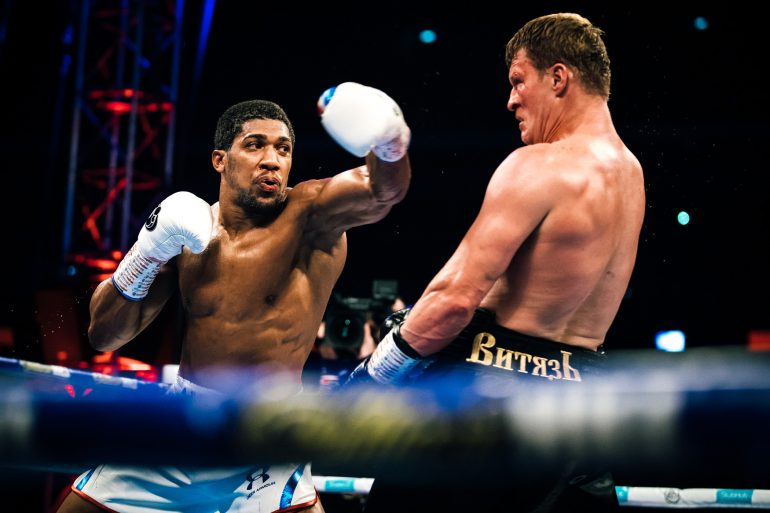 LONDON — Anthony Joshua appeared to be in some trouble.

The champion’s nose was spewing blood. His chin was catching leaping left hooks and overhand rights from his 39-year-old opponent, a man believed to present little challenge to the best heavyweight in the world.

With the bout halfway over, Povetkin was in control. Until he wasn’t. A pulverizing left hook turned the tide in the seventh, and Joshua made certain there wouldn’t be another round. Povetkin was out on his feet before the Brit froze him with a right hand to the midsection, followed by another left hook and a straight right. The Russian crawled to his feet before the count of 10 — just barely — and almost crashed through the ropes as he pulled himself vertical. It was all for naught.

Joshua (22-0, 21 knockouts) was patiently waiting, and unleashed the aforementioned sequence — punctuated by a chilling right hand — that ended matters with a second knockdown at 1:59 of Round 7, whipping the hometown crowd of 80,000 plus into a frenzy on a brisk, rainy Saturday evening at Wembley Stadium.

The 28-year-old Brit remains the king of the heavyweight division, and moves on to the finals of what amounts to a de facto heavyweight tourney. The other half of the bracket came into focus less than 24 hours earlier when it was announced that Deontay Wilder and Tyson Fury — both of whom own claims to the heavyweight throne — will meet Dec. 1 Stateside.

“And I’m here now. I had a good fight. I got my knockout streak back. I found my right hand. It went missing for a little while. I found it and it’s lining up April 13.” 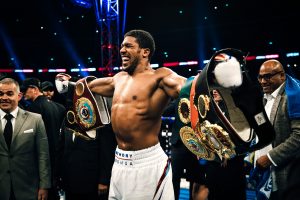 That’s when Joshua will return to Wembley for another heavyweight championship defense, and the hope is that he’ll face whoever emerges between Wilder and Fury. For a while, it seemed we’d be treated to Joshua-Wilder on this September night. There were heated talks over the summer, but weeks of dragged out negotiations didn’t produce the mega fight. Instead, Joshua elected to face his mandatory.

Povetkin (34-2, 24 KOs) wasn’t a sexy opponent, but he was a worthy challenger, despite the significant size gap (Joshua outweighed the Russian by more than 23 pounds and owned four-plus inches in height.) Like Joshua, Povetkin is an Olympic gold medalist, and he entered the bout rated No. 3 by The Ring.

The two-time PED cheat’s only other professional defeat came at the capable hands of Wladimir Klitschko. The future hall of famer planted Povetkin on the canvas four times when they met in 2013, but he couldn’t produce the finish. Joshua did, even though he was forced to weather some rocky moments in his sixth title defense. Just don’t tell that to the judges. Curiously, the Brit was leading on all three scorecards at the time of the stoppage (tallies of 58-56, 59-55 and 58-56). The Ring scored it 58-56 the other way.

Of course, the scores were immaterial when the result was rendered. Joshua unleashed the equalizer and removed the judges from the equation the way great heavyweight champions are meant to. Before the knockout blow was delivered, Povetkin’s boxing acumen and speed troubled Joshua. He busted Joshua’s nose in the opening round, and it was apparent the crowd favorite had trouble breathing.

Carlos Takam broke Joshua’s nose with a headbutt in October 2017. He insisted this injury wasn’t nearly as severe at the post-fight news conference in a stuffy voice between sniffles. “It’s a nice way to wake up and realize you’re in a tough fight,” Joshua quipped. Povetkin buckled Joshua in the final moments of Round 1, and it was clear that yes, this was indeed going to be anything but a routine title defense.

He neutralized Joshua’s height advantage by swarming his opponent and coming over the top with the left hook. Joshua held his left hand at his hip and Povetkin capitalized with a bundle of overhand rights, too. The majority of the damaging blows were delivered by Povetkin until Round 4, when a Joshua right hand sliced him over the left eye. 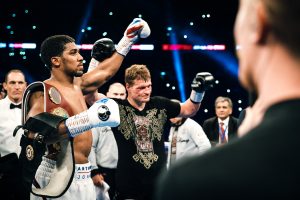 Perhaps emboldened by the sight of his prey’s blood, Joshua finally started to pump the jab. A left uppercut in Round 6 dazed Povetkin, who was huffing and puffing. There was no doubting his talent and pedigree, but at his advanced age — coupled with the fact journeyman David Price knocked him down in March — Povetkin was pegged as a massive underdog.

“I stood there a bit too long, and fighters at their age, the last thing they lose is power,” said Joshua, who went the 12-round distance for the time in March, a victory over Joseph Parker. “I look at (the critics) as not my enemies, but my friends because they look for the smallest things you need to make you perfect.”

He’ll need his detractors at their most boisterous if he’s going to face either Wilder or fellow countryman Fury as promised. Neither man boasts Joshua’s overall game, but each fighter possesses special traits that could end the champion’s reign.

Wilder is widely considered the sport’s most fearsome puncher. Fury is a masterful boxer whose uncanny athleticism for his size presents a tricky puzzle for anyone. The winner is in the driver’s seat for a matchup with Joshua. Now we wait for the dust to settle, and hopefully, for the ink to dry on the contract for an April 13 bout to crown boxing’s first undisputed heavyweight champion in the four-belt era.

“(My team) will see who’s serious,” Joshua said. ” … Any challenger is welcome. Someone’s gonna win that belt December 1 and I want (the winner). If the stars align, we’ll be here for sure.”