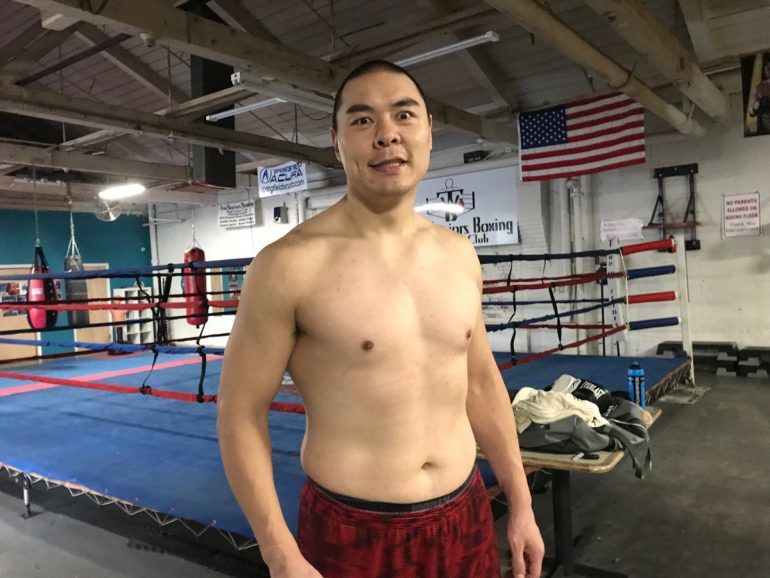 Zhang Zhilei will face American heavyweight Don Haynesworth on September 28, but he'd much rather be fighting the bigger names of the division. Photo by Ryan Songalia
21
Sep
by Ryan Songalia

Down a warehouse-lined stretch of Paterson, New Jersey, a heavyweight boxer pounds the punching bag in an otherwise quiet gym. Boxers aren’t an unusual sight in this small town just a few miles from Manhattan; most notable among homegrown products are former WBO junior welterweight titleholder Kendall Holt and Rubin “Hurricane” Carter, the hard-hitting middleweight contender who was the only man to stop Emile Griffith.

What’s unusual about this sight is that Zhang Zhilei, the super heavyweight silver medalist at the 2008 Olympics, is no local product. He grew up 7,000 miles away in Zhoukou, China, moving to New Jersey in 2014 to pursue a career as a pro boxer.

“I came here by myself,” said Zhang, who has a wife and son back home. “Sometimes I feel homesick and I really miss them, but there’s no regrets.”

If he walks through any public area in his home country, he’s mobbed by admirers. At 6-foot-6, 260 pounds, Zhang draws attention with his pure physicality, but save for neighborhoods with big Chinese populations like Flushing, Queens or New York’s Chinatown, most see him as someone who looks like a somebody. They just don’t know who.

Ask his trainer/manager, Shaun George, he’ll tell you they’re looking at the best heavyweight in the world.

“Zhang Zhilei is the best fighter in the world. He’s a skilled heavyweight, he does it all — box, bang,” said George, himself a former pro who has transitioned to a young trainer. “His technique is fine; it’s going to get better. All you have to do is put him in with the best fighters in the world.”

The only thing George feels Zhang is lacking is an opportunity. Zhang (19-0, 15 knockouts) is back in action on September 28 in a scheduled 10-rounder against Don Haynesworth (15-2-1, 13 KOs) in Changsha, China. The fight will be televised there on CCTV, but isn’t being picked up in the United States or United Kingdom, the geographical regions where most of the top heavyweights are from. Despite holding a respectable looking record, Haynesworth’s highest-profile bout was less than a year ago when he was stopped in three rounds by Bryant Jennings.

At age 35, Zhang wants something substantial soon, and he’d much rather be fighting someone higher up the totem pole. He admits to being “a little frustrated” with promoter RocNation about his relative anonymity at a time when the heavyweight division is hotter than it has been since Lennox Lewis’ retirement, with fighters like Anthony Joshua, Deontay Wilder and Tyson Fury poised to generate worldwide headlines and millions of dollars in purse money.

“I can fight any one of those guys, but do they want to fight me?,” Zhang, a rare heavyweight lefty, muses through interpreter Kurt Li. “This is one of the major problems out there, maybe because I’m an underdog, I don’t have a name yet. And what if they lose?”

To those not familiar with Mandarin, the language most commonly spoken on the Chinese mainland, it’s nearly impossible to follow along with the dialogue between Zhang and George as they work the punch mitts. One assumes they’re speaking the typical boxing lingo — “one-two”, “slip, slip” — but it’s difficult to be certain.

George, now 39, is a Brooklyn native of Guyanan descent who was a two-time National Golden Gloves champion and light heavyweight contender before his career wrapped in 2009. He went over to China in 2010, training the larger boxers of the Chinese national amateur team, including Zhang. He began learning Mandarin while in China, picking it up from the boxers in the gym and asking what certain phrases meant.

“Chinese is four tones, so one word can mean four different things depending on how you say it. It’s really hard for me to understand it, but the boxers teach it to me,” said George.

Li, asked on a scale of 1-10 what George’s comprehension of the language was, rated George a 4. Good enough to order dinner, but details of boxing strategy often require explaining by the native-speaking Li.

Zhang, like George’s situation, understands more English than he can speak, but when George corrects something that isn’t to the American perfectionist’s liking, Zhang responds, “Yes sir.” The goal, it would seem, is to have Zhang absorb George’s smooth, New York-style boxing to go along with his innate physical abilities.

“He’s a sponge,” said George. “One thing I can say about Zhilei is, if there’s something he doesn’t understand, he’s gonna keep working on it.”

Pro boxing in China, long outlawed during Mao Zedong’s Cultural Revolution, experienced a brief renaissance (or a “Rebellion” as a New Yorker profile termed it) in 2013 when two-time gold medalist Zou Shiming signed with Top Rank and kicked off a series of Vegas-style boxing events in Macau. Zhang’s own introduction to the sport began many years earlier, when he watched the first meeting between Mike Tyson and Evander Holyfield in 1996.

“Tyson stands for power, explosiveness. Holyfield’s mind is just unbelievable,” said Zhang. Zhang had first been acquainted with sports at 13 years old as a canoeing athlete, but switched to boxing at 15. “I just liked fighting,” said Zhang.

After making it to the final in 2008, Zhang returned to the Olympics in London four years later. That’s where he met Joshua in the ring. Zhang was a more polished fighter than he was in Beijing, where he leapt in and out wildly, ignoring his reach advantage to make contact. George had trained Zhang for the previous two years, but when it was time to fly out to London, George was passed over in favor of Chinese coaches.

“I thought Zhilei went in with the wrong strategy and mind frame,” said George, who watched the Games back home in New Jersey. “Zhilei listens to whatever his coaches tell him to do. So he went in there looking for the KO.”

Joshua scored a knockdown in Round 2 and went on to win their quarterfinal match, 15-11. George stayed on with the amateur team, guiding them through the 2016 Games, while Zhang turned pro in 2014 in search of a different heavyweight crown.

They reunited in October of 2017 when Zhang switched back to George after a stint with trainer Diego Rosario. Their first fight together in July, Zhang’s first in 10 months, resulted in Zhang’s sixth straight first-round knockout win. That’s more an indication of the level of competition he’s been fighting, but Zhang had been near an opponent befitting his aspirations a few days prior when he posed for photos next to Joshua at a press conference for the DAZN streaming app.

George said the images went viral in Chinese social media circles, with fans back home clamoring for one of their own to get a shot at the man who holds three of the four major heavyweight titles.

“I would like to make this fight happen. Anthony Joshua is a superstar, he’s a bigger name and he holds belts. In the heavyweight division, you never know. It takes only one punch,” said Zhang, punching his right palm with his left fist.

George feels the fight makes sense also from a demographic standpoint. The New York City area is estimated to have more than 800,000 ethnic Chinese residents, and about 1.4 billion people live in China itself. Why couldn’t an unbeaten Chinese heavyweight recreate the “Linsanity” craze (the hype surrounding former Knicks player Jeremy Lin) at Madison Square Garden opposite a British heavyweight champion making his U.S. debut, George wonders.

“He’s ready right now. Give me Bryant Jennings. Give me any top five heavyweight, I’ll tell you he beats them,” said George.

“I still have that very big hope, that the whole world is going to see me. Everyone’s eyes are going to focus on me,” Zhang says, as he once again strikes his palm. “I am a giant man from China.”