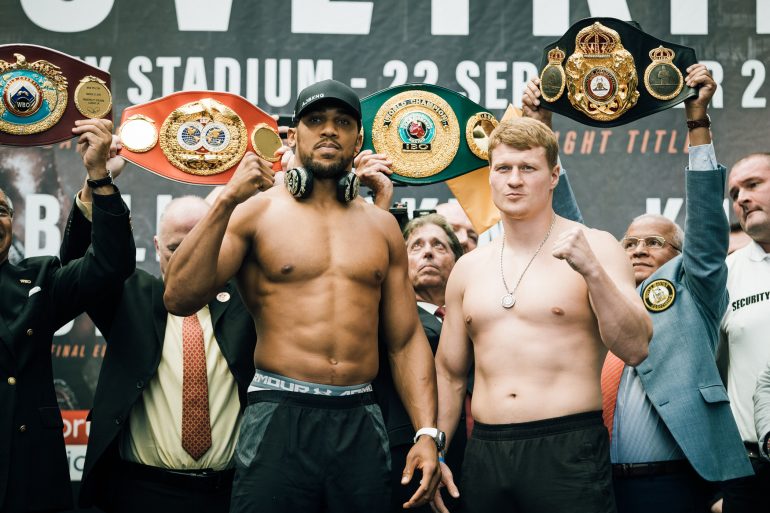 LONDON — The hundreds of fans who shuffled into the Business Design Center on Friday were greeted outside by massive signage depicting likenesses of Anthony Joshua and Alexander Povetkin.

Once they made their way inside the sprawling, three story-venue, it was evident this wasn’t the usual weigh-in that’s customary in the United States. Dillian Whyte stood off to the right, and dozens of fans stood waiting in line to grab a photo with the heavyweight contender.

To the left, an opportunity to pose with Joshua’s heavyweight title belts, all three of which will be on the line Saturday at Wembley Stadium in the first fight streamed on fledgling platform DAZN, available on a free trial and $9.99 a month thereafter. The champion tipped the scales at 246.5 pounds; the challenger weighed 222 pounds.

Joshua, who sports one of the best physiques in boxing, stands tall at 6-foot-6 and towered over his foe, who is generously listed at 6-foot-2. Povetkin appeared strong but a bit soft. The 28-year-old Brit also owns the youth edge heading into his title tilt with the 39-year-old Russian, who was twice busted for performance-enhancing substance use.

Joshua is a 12-1 favorite to retain his titles, along with his status as The Ring’s top heavyweight. He’s coming off the first distance fight of his career, a 12-round decision victory over Joseph Parker in a title unification bout. If Joshua (21-0, 20 knockouts) is to score another knockout, it would be an impressive feat.

After all, Povetkin (34-1, 24 KOs) has never been stopped, though he was dropped by British journeyman David Price in March (his most recent outing). Povetkin (Ring No. 3) bounced back to stop Price in Round 5, and it was just the second fight in his career where he tasted the canvas. In his lone professional loss, he was dropped four times by Wladimir Klitschko but lasted the distance.

Said Joshua: “I’m proper relaxed because Rob (McCracken) said it to me, my trainer said to me, ‘don’t stress too much because in 30 years, you’ll look back and say these are the best days of your life.'”