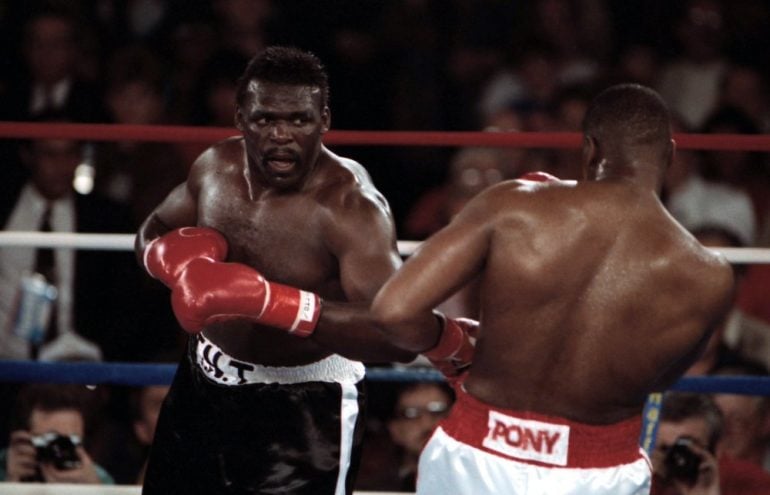 Tony Tubbs was a skilled heavyweight who rose to prominence in the 1980s, winning the WBA title in 1985 before losing it in his first defense. For a number of years he was a solid part of boxing’s glamor division, taking on several top fighters, although weight and drug issues threatened to blight a promising career.

Tubbs was born in Cincinnati, Ohio, on February 15, 1958. He lived in the projects and his early years were difficult and led him toward boxing.

“Things were tough,” Tubbs told The Ring. “I was from a big family; two boys and seven girls. I was fighting all the time. I was fighting every time I got to the streets. I first went to the gym when I was 16.”

Tubbs was a top amateur. He reached the quarter-finals of the World Championships in 1978, losing to legendary Cuban Teofilo Stevenson who would go on to claim gold. The following year Tubbs won the AAU and World Cup golds medals, and during that time he served as one of Muhammad Ali’s sparring partners.

“Muhammad Ali taught me a lot. I miss him today, I really do,” said Tubbs, recalling his time with ‘The Greatest”. “When Muhammad lost to Leon Spinks (in February 1978), he was getting older, his reflex was getting bad. He needed me because I had speed. We would get in the corner, he would try to hit me, I would slip him. He was trying to slip a lot of shots. That’s what made him a champion again.”

After posting an impressive 240-13 ledger as an amateur, Tubbs turned professional after the U.S. boycotted the 1980 Olympics. He regularly appeared on the east coast and after just 14 fights, he faced his toughest opponent to date, former heavyweight title challenger Jimmy Young. “TNT” out-boxed the iron-jawed veteran en route to a 10-round decision.

In March 1985, on the undercard of the Larry Holmes-David Bey heavyweight championship bout, Tubbs bested James “Bonecrusher” Smith over 10 rounds in a WBA eliminator. Just six weeks later, the unbeaten contender took on old amateur rival Greg Page for the belt in Buffalo, New York. The two had met seven times in the unpaid ranks, with Page winning six of them.

Tubbs fought a disciplined contest in his first 15-rounder, upsetting his more experienced compatriot to win a unanimous decision in front of over 6,000 fans.

“(He beat me in) amateur boxing,” Tubbs reminded his detractors after the fight. “Tonight we fought as professionals. Determination won it for me tonight. I knew it was a close fight. I was trying to pace myself for 15 rounds. Greg’s mostly a counterpuncher, and even at 239 pounds he can hurt you with either hand, so I just tried to get there first with my punches and tag him when he came in.” 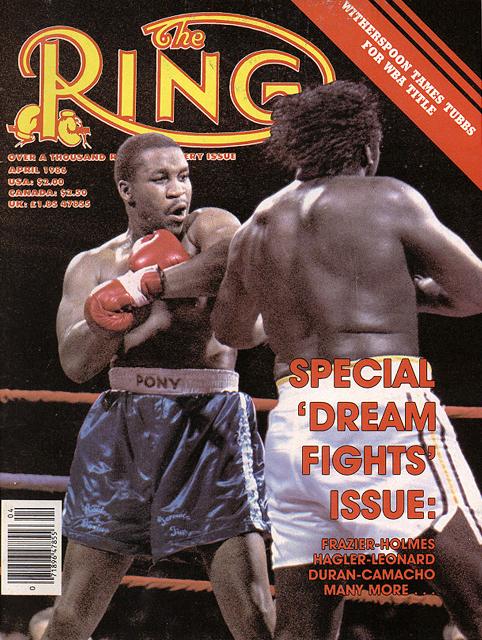 In his first defense, in January 1986, Tubbs weighed 15 pounds heavier than when he won the title. Subsequently, he was ouboxed and lost for the first time, dropping a razor-thin majority decision to Tim Witherspoon. After that fight, Witherspoon tested positive for marijuana and the two were mandated to face each other in December.

Tubbs, however, pulled out a week before the rematch with a shoulder injury. Don King, believing his fighter was looking for more money, would replace him with “Bonecrusher” Smith, who stepped in at late notice to upset Witherspoon in a single round.

This left Tubbs in a position where he would have to fight his way back into contention. He won three low-level fights before being selected to face undisputed champion Mike Tyson in Tokyo, Japan, on March 21, 1988.

Tubbs enjoyed a good opening round but quickly tasted the champion’s notorious power and was stopped following a brutal assault at 2:54 of the second round.

The former champion rebounded with three wins before besting Orlin Norris for the NABF crown, but the fight was declared a no-contest when Tubbs tested positive for cocaine.

His next big fight came against 1988 Olympic silver medalist Riddick Bowe in Atlantic City on April 20, 1991. Tubbs gave a good account of himself but dropped a hard-fought unanimous decision to the future heavyweight champion.

There were other good moments. Tubbs found some form when he outpointed the trio of Bruce Seldon, Jessie Ferguson and Alexander Zolkin in the early 1990s. But those wins were bookended by disappointing stoppage defeats.

“It was cocaine. I had problems, I’m not as sharp as I used to be,” Tubbs acknowledged openly. “I still play my part. I’ve been clean almost six years.”

Tubbs, now 60, still lives in Cincinnati. He is divorced and has 16 – yes 16 – children; eight boys and eight girls and, he estimates, 25-30 grandchildren. Perhaps not surprisingly, most of his money went on child support and he now lives modestly off his pension. He enjoys training children and giving them the benefit of his vast experience, particularly his grandson AJ. “If you see him fight, you see me,” said the former champ.

Tubbs graciously took time to speak to The Ring about the best he fought in 10 key categories.

BEST JAB
TYRELL BIGGS:
He was in the 1984 Olympics. He moved like Muhammad Ali. I beat him in a fight where we all came together in a tournament. I think he had one of the best jabs. He had good movement and e tried to be the next Muhammad Ali.

BEST DEFENSE
TIM WITHERSPOON:
Tim had a good defense. He was tough to land a clean shot on.

FASTEST HANDS
MIKE TYSON: I think I had the best hand speed, but Tyson had hand speed too. He had power and speed.

FASTEST FEET
BIGGS: I never had any problem with anyone’s footspeed. Tyrell Biggs; he’s a mover, you had to catch him. He had the best footwork and used all of the ring. I had to chase him down.

BEST CHIN
JIMMY YOUNG: I fought so many people [laughs]. Greg Page had a good chin, we went 15 rounds. Tyson had a pretty good chin, but if he went five rounds or more he’d tire out. Riddick Bowe had a good chin, I don’t think he beat me that fight. Jimmy Young had a nice chin. I would say he had the best chin.

SMARTEST
WITHERSPOON: Greg Page was clever. He would let you come in and feint you and with his power. He would just sit there, but I was too fast. I beat him on the scorecards. Tim Witherspoon beat me on points and Bonecrusher Smith cracked him on the chin, anything can happen in a fight. I’d say that Tim was clever. He was comfortable in his fight zone. When I fought Bonecrusher I kept throwing combinations and getting out the way. I should have done the same thing to Tim, but every fight is different.

STRONGEST
TYSON: I think Tyson was way stronger than Bowe. Tyson was a comer; he was like a Joe Frazier. He depended on hitting, and he was a fast hitter. He had short arms, but when he got in he could dig, so you don’t want to let him get in.

BEST PUNCHER
TYSON: When Tyson hit me I felt dazed. When you’re younger you can take the puncher better than when you get older. If I had stayed on the outside he wouldn’t have beaten me. He gave up all his strength after five rounds. He was a hitter. Certain fighters would never fought Tyson, Riddick Bowe would never fight Mike Tyson. Bowe never fought nobody, he never fought Lennox Lewis. I’m glad I had the fights I had.

BEST BOXING SKILLS
WITHERSPOON: He would come out just like a Philadelphia fighter, trying to counter. He’d try to put some things together, so you’ve got to think. But I was a boxer, I never was a puncher. When I first came in, I fought Witherspoon’s fight. I can catch and slip and do that game, but I should have been boxing because I know how to score. When you fight your own fight you always win, Muhammad Ali taught me that. Tim Witherspoon was a comer, he was a hitter, but I should have been working my jab. He fought his way, you’ve got to have skills to fight his way.