While we wait for Anthony Joshua-Deontay Wilder, Alexander Povetkin fills the void 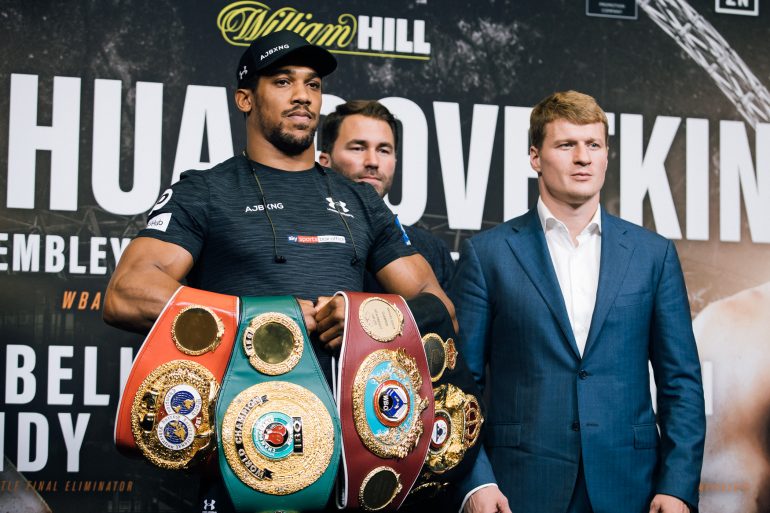 LONDON — Too often in boxing, the lead-up to a fight is really more about another matchup that isn’t yet happening.

It’s been that way for decades. While fans pine for a super fight that appears all too obvious, organizers deliver a less-appealing interim bout of sorts that serves as further promotion toward the end goal. This cat-and-mouse game dragged on for over five years before Mayweather-Pacquiao finally came to fruition.

Now, we’re being treated to similar drama between Anthony Joshua and Deontay Wilder.

Negotiations between the two heavyweight titleholders played out in the media this summer with anticipation at a fevered pitch, but the talks didn’t deliver the super fight. Instead, Joshua will share the ring with Alexander Povetkin on Saturday at Wembley Stadium in a matchup that represents little more than a stepping stone toward that eventual meeting with Wilder for all the marbles.

“With Wilder, I realized that there’s been a lot of talking and he’s done a lot of hard work,” said Joshua (21-0, 20 knockouts), The Ring’s top-rated heavyweight. “Ultimately, when we’re all in the same division, we all have to fight. We’ll get it on as soon as the time is right. Time doesn’t wait for no man and time didn’t wait for us to get our negotiation together so we have to keep it moving with Povetkin.”

After money, that’s what it’s always about in boxing: time. Really, Joshua-Wilder might not be ripe just yet. Sure, it’s a tasty matchup that would sell bundles of pay-per-views both stateside and abroad right now. It figures to be a much more lucrative event next year. The Mayweather-Pacquiao saga proved that the waiting game works.

The 2015 welterweight title bout was a couple years past its expiration date — at least from a competitive level — but the fight shattered revenue records. Using that formula, is there any rush for promoters to consummate Joshua-Wilder right here, right now?

And when one half of that equation is a bona fide superstar in his home country, like Joshua is, there’s even less urgency to consummate a coin-flip bout with a dangerous puncher. The unified heavyweight champion’s in-ring exploits routinely pack stadiums with 80,000-plus fans and there’s no sign of slowing down.

A similar crowd will watch the 28-year-old take on Povetkin, who on paper, represents the second-most dangerous test of the Brit’s career — even if the Russian is being counted out. “They’re underrating him,” Joshua offered.

Povetkin is rated No. 3 by The Ring, and like Joshua, is an Olympic gold medalist; in fact, he’s been a staple of the heavyweight landscape for the greater part of 15 years. It’s his advanced age and most recent performance that give insiders pause.

For even though Povetkin (34-1, 24 KOs) scored a fifth-round KO of British big man David Price in March, the 39-year-old Russian was dropped by the middling fighter in Round 3. Knock down aside, Povetkin might be considered a worthy foe at any other time, but in the aftermath of the failed talks between Joshua and Wilder, any other matchup is viewed as a consolation prize.

Joshua-Povetkin is being served as the kick-off for the U.S. launch of fledgling streaming service DAZN. A free trial is available to watch the fight, and executives are banking on Joshua’s star appeal to attract subscribers.

Wilder, meanwhile, is headed toward a high-stakes battle with lineal champion Tyson Fury, the other significant player in the heavyweight triumvirate. An announcement for a December date in the United States is imminent, and if Wilder wins as expected, a fight with Joshua next year will be worth that much more money.

After all, Fury is British, charismatic, and represents the most high-profile foe of Wilder’s career. Wilder has yet to gain a foothold in the American media landscape out of the tight-knit boxing circle, but his first pay-per-view headliner should change matters. Sharing the bill with a British star should give Wilder the rub across the pond, too.

“When I turned professional, Wilder and Fury were five years ahead of me so I looked to those guys and thought, ‘What are they up to in their career?'” Joshua recounted. “Now I’m on my journey. I’ve surpassed what they’ve done. I’ve set a new level of
what should be done in the heavyweight division.

“Everyone knows the heavyweight division could be one punch that can change the course of history. So that’s what keeps my eyes on the prize. … One foot wrong and you’re at the start of the pecking order again.”

That’s the fate Joshua is hoping to avoid, and the danger Povetkin brings. If Joshua is looking past him — he insists that’s not the case, of course — Povetkin could make him pay. He’ll have to work his way inside to take away the champ’s four-inch height advantage, but he possesses the experience to do so.

His lone career defeat came against Wladimir Klitschko in 2013, the same man Joshua stopped last year in a heavyweight classic. He was forced to rise off the canvas to do so, and in the process, proved his mettle, punching power and overall boxing ability.

Joshua is lined up for another Wembley Stadium outing on April 13, and if both he and Wilder are successful in their upcoming fights, the sides are sure to return to the negotiating table.

If all goes according to plan Saturday, it’s on Wilder to take care of his end of the bargain. Then the waiting game can resume in earnest.