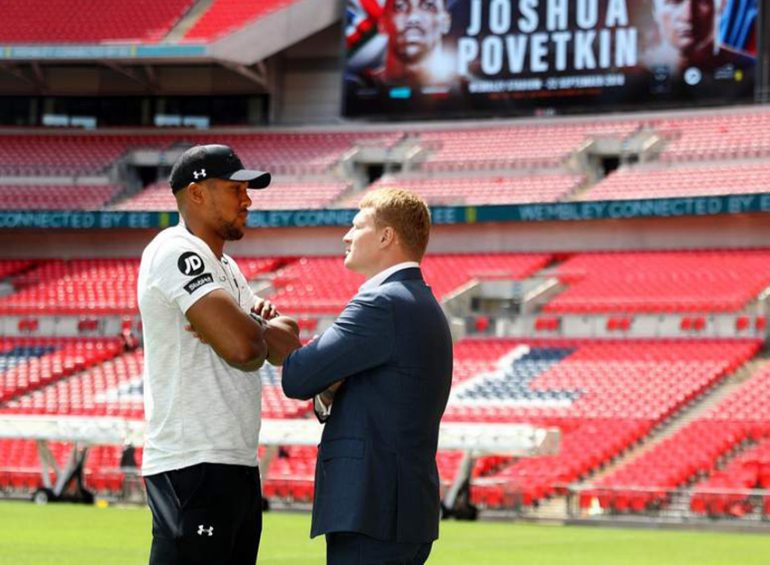 LONDON, England – Anthony Joshua admits he is under “tons of pressure” ahead of Saturday’s fight with Alexander Povetkin.

The WBO, IBF and WBO champion is expected to draw a crowd of around 90,000 to Wembley Stadium and his promoter, Eddie Hearn, is anticipating record UK pay-per-view sales.

“There’s lots of pressure,” said Joshua. “That’s the reality of it. I look cool, calm and calculated but underneath that we know what we are in for.”

In front of more than 100 media members from around the world, he added, “What more can I do but do my best?”

He and Povetkin were respectful as they posed for head-to-head pictures, ending with a gentlemanly handshake before going their separate ways.

Povetkin is here on business and kept his words short. “When I fought Klitschko I was much weaker and in much worse shape than I am now,” he said. “I’m in very good shape and in camp we have been working on my strength and endurance.”

Joshua’s trainer Rob McCracken reiterated his thoughts that Povetkin is a “top tier” heavyweight, and said he was a level above the champion’s last two opponents, Carlos Takam and Joseph Parker.

“Povetkin is his mandatory and Anthony is happy to fight him, he’s a real champion,” said McCracken.

“I think Povetkin comes from the top tier of heavyweight boxing and it’s going to be a tremendous fight. Anthony has prepared long and hard and it’s been a hard camp, but he’s ready.”