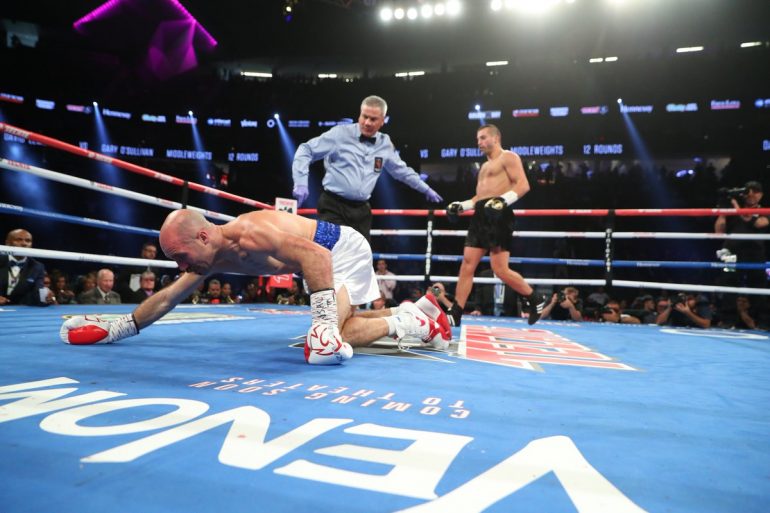 LAS VEGAS — Spike O’Sullivan vowed to smash up David Lemieux and finally earn his way to a title shot. He never had a chance.

Lemieux cracked O’Sullivan with a devastating left hook in Round 1, a punch that spun O’Sullivan’s head around. The Irishman attempted to regain his balance, but it was a fruitless exercise. Referee Russell Mora stopped the middleweight title eliminator at 2:44 of the first bout, and Lemieux is once again in line for a meaningful fight.

“Don’t mess with me – when O’Sullivan talked, I kept it in me,” said Lemieux, 29. “I bring it to the ring, I don’t disrespect my opponents, I don’t trash talk.

“This was my lesson to him, to be humble. I’m tired of these world champions smash talking just to promote their fights. I want to be able to teach my kids and the kids that follow me to be respectful and to never call out a fighter and keep it professional. I hope he learns to be humble, or be humbled.

Lemieux (40-4, 34 knockouts) did hurl plenty of insults at O’Sullivan, though. He called the 34-year-old a “bad guy” and derided O’Sullivan’s skills. And he was right: Spike couldn’t take his punch.

Because for all of Lemieux’s flaws as a fighter — and there are many — the Canadian is one of the best punchers in the sport. It’s his power that won him a middleweight title in 2015, but it’s his lack of defense and slow feet that were his downfall in uncompetitive title fight defeats to Gennady Golovkin and Billy Joe Saunders.

Lemieux now wants the winner of Canelo-GGG 2, but it’s doubtful we ever see him in the ring again with Golovkin, a fight that would generate zero public interest. If Alvarez fights in December on HBO, though, Lemieux is a viable opponent for a non-PPV bout.

O’Sullivan (28-3, 20 KOs) is now finished as a contender, though; his time on The Ring’s top-10 middleweight lasted all of nine months. His seventh-round KO of former top prospect Antoine Douglas transformed him from journeyman to contender, but it was all a mirage.

“Unfortunately, this is boxing,” said O’Sullivan, who weighed 165 pounds on fight night. “I got caught, and it just so happens it was a 179-pound light heavyweight who caught me. That was a big weight discrepancy at fight time.”