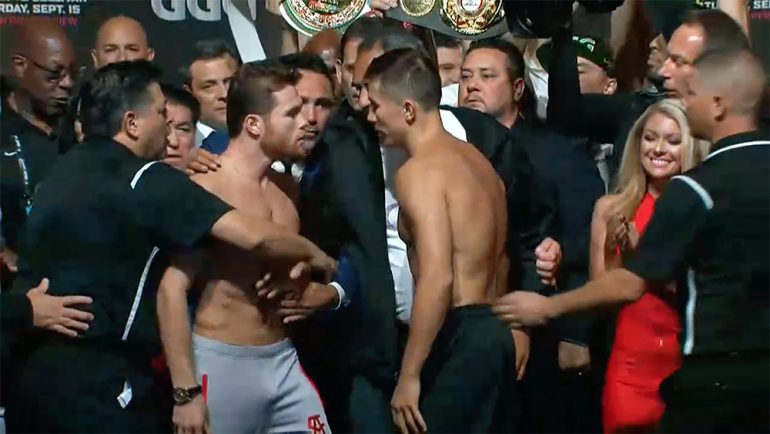 This feature originally appeared in the October 2018 issue of The Ring Magazine.

After a draw, everyone’s got an opinion on what should’ve happened, what went wrong and who’s to blame. And then there are the people who actually have to figure out what to do in the return bout.

The Ring picked the minds of Derrick James and Stephen “Breadman” Edwards to help analyze the Canelo Alvarez-Gennady Golovkin rematch from a unique perspective – that of the trainer mapping out the preparation and fight strategy for the middleweight stars.

James, The Ring’s 2017 Trainer of the Year, admires Alvarez’s career accomplishments and command of the ring. He’s also kept a close eye on the two-division champ’s progression in the event the stars of his Texas stable – WBC 154-pound titleholder Jermell Charlo and IBF welterweight beltholder Errol Spence Jr. – one day move up in weight to challenge the Mexican attraction. James, who has at times been critical of Golovkin in interviews, shared his thoughts on how he would train Alvarez for the night of May 5.

Edwards, who trains junior middleweight contender Julian Williams, does not share James’ criticism for Golovkin. The popular coach and boxing columnist believes Golovkin and the middleweight veteran’s trainer, Abel Sanchez, are bound for the International Boxing Hall of Fame. Edwards, who witnessed Golovkin’s work ethic and ring prowess up close when Williams served as a sparring partner for the first fight with Canelo, shared his thoughts on how he would get GGG ready for the second go-around. …

ON HOW HE WOULD TRAIN ALVAREZ:

I’d work on his conditioning a little more, have him do more sprints. I think he boxed a beautiful fight the first time. He boxed perfect and made Golovkin a little hesitant to throw. But in the rematch, Canelo should be more aggressive, push GGG out of his comfort zone, push him back on his heels. He should be boxing like he did, because he did a great job slipping in and out, and had he not gotten a little tired, it would have been a different fight.

So, I would have Canelo do more sprints in camp. I’d train him for a different type of fight. Once he got in there, it was a little more intense than he expected, maybe. His training was good for a basic fight, but in the hyped condition he didn’t hold up.

He’d do sprints at the fitness center or at a track or on a treadmill, 40 to 50 yards. On the treadmill, at say a grade of 10 to 11 percent, he’d do one-minute sprints and then get off and right away do a minute on the mitts. Then back onto the treadmill.

He has to work a little harder than he prepared to before. GGG kept coming; the intensity level was hyped. Canelo was in shape to do 12, but not at that pace.

Would I have him spar bigger guys and smaller guys? Everything. Even though Golovkin is not a really fast fighter, I’d have Canelo spar fast guys, because then – compared to their handspeed – GGG would seem a bit slower. For sparring, it would be the same deal, but maybe push him a little more. This is a bigger fight. He needs to make a statement, and we have to make him work a little harder to get to the next level, to push him to greatness.

I’d ask for more volume, definitely, because in every round he has to make some sort of statement to differentiate from the other guy, show who you are. I would have him jab more, but he’d still use the movement. He would make GGG reach for him, and he’d continue the counterpunching. Make Golovkin reach, open him up. We’d try to back him up, because I don’t think GGG is great inside. Canelo has better footspeed than GGG as well. I’d want not so much bouncing around; it’s about creating distance to get that good punching angle.

I want Canelo to be very defensive-minded also. He won’t be able to move and get away the whole fight – that’s asinine to think – but he will have to stop and fight … The arsenal is deadly and GGG is heavy-handed.

Would I tweak his defense? I think he did really well, but not so much bouncing on his toes this time. He needs to choose why to move.

Would I have him watch tape of anyone? Maybe watch Sugar Ray Leonard vs. Marvin Hagler. I would watch how Ray boxed in spurts, used those legs, used that jab, that distance.

So, will Canelo win? I think he will. I think he may be more aggressive this time. GGG in the first fight wasn’t deadly. He wasn’t a killer. Canelo did well to take the fight away, but this time he’ll have to push himself to a whole ’nother level.

They both fought really well the first time. This fight is about conditioning level and stepping outside the comfort zone to be great.

ON HOW HE WOULD TRAIN GOLOVKIN:

Before I get into anything, I want to say up front that Abel Sanchez is doing a great job with Golovkin. He’s probably a Hall of Fame coach. I don’t want to imply that I think there’s really anything GGG and him could do better together. Their record speaks for itself.

Anyway, I don’t know what GGG does with his conditioning. I know he runs a lot, so I would probably say since he’s an older fighter, that he start camp a little later so he doesn’t wear out.

I think he’s a clean fighter, and when you’re a clean fighter, there’s a greater chance of overtraining. You can’t just recover like that at 35 and 36. I’d maybe cut his miles, or days he runs, by 20 percent. If he runs every day, switch to three to four days a week, and maybe add some low-impact stuff, like swimming.

Regarding sparring, I’ve never been more impressed with anybody in terms of the caliber of sparring they have. I’ve seen it personally. I give them all the credit. He was sparring five world-class boxers, two to three rounds per guy, four-minute rounds in the altitude. It’s killer to do that! I’d probably cut that down, get two to three guys in camp.

Yeah, maybe cut everything by 20 percent.

The last couple of fights, GGG looked like he was pushing it to the wall, like Roman “Chocolatito” Gonzalez before his fights with Srisaket Sor Rungvisai – getting to that brink.

So, the game plan … I saw Canelo doing a few things to GGG in the first fight, and though I thought GGG won, I thought Canelo performed better as far as applying his technical skills. But the Golovkin jab took over the middle rounds and Canelo didn’t have the stamina to hang. Canelo has to take off rounds, but as far as skills displayed, Canelo displayed more skills in the fight.

There was plenty of give and take in the first fight. Whoever does more to upset the balance will win the rematch.

It will be tough for GGG if there are no adjustments. The only punch he landed consistently was the jab. I saw Canelo escaping the power punches, Canelo moving to the left, using the same escape route every single time. A fighter of GGG’s caliber – and I think he’s headed to the Hall of Fame; he’s one of the best ever at 160 pounds – he has to adjust to that move a little better. GGG has to stay on Canelo’s left shoulder, slide to his right, step to his right, cut off the escape route. He has to force another exit route. He has to punch on the move a little better. In the first fight, I was pulling for GGG, so I’m saying to myself, “He keeps missing the right hand over and over. Maybe put it to the body.” He has to force Canelo to go another way.

And another thing I noticed that was very bothersome was Golovkin allowing Canelo to get too comfy on the ropes. Canelo was using the ropes as a third leg. Golovkin, at one point, was destroying guys like Matt Macklin on the ropes; he was the best in the world at putting a guy on the ropes and leaving him there.

Canelo may not have visibly hurt GGG, but I think he punches hard enough to make Golovkin hesitate to run up on him on the ropes. Canelo doesn’t have the stamina or legs to keep GGG in center ring. He was using the ropes to spring off and counter. I think the jab was the only punch Golovkin felt comfortable throwing without getting countered too much. We can talk about a guy’s chin – even a guy with a great chin like GGG, he knows his own chin, he knows how he feels when hit. I think Canelo’s punches had an effect; they just didn’t have a visible effect.

Golovkin used to spend a lot of time body-punching; he arguably has one of the best left hooks to the body in the last 20 years. I’d like to see him revert to his animalistic days when he was beating up Macklin and Marco Antonio Rubio.

But maybe Canelo caught GGG at the right time, and maybe he’s not the savage he once was.

In the first fight, Canelo didn’t run, but GGG couldn’t get off like he normally does. Now, people say the last thing to go is power, but maybe the first to go is punch selection. Maybe he can’t put together punches the way he used to. One thing GGG can do to make it easier is to hit Canelo with straight punches to the body rather than “round” punches. Straight jabs, straight shots to the body. That’ll make it easier for softening him up for the money hook around the elbow. Golovkin’s got longer arms and the better jab, and straight shots to the body are very difficult to defend against.

There wasn’t enough savage pressure in the first fight. It was very, very calculated. GGG has to come like he did when he was new on the scene against Grzegorz Proksa. Back then, he was a tank. He didn’t play with anyone.

Both are talented, but in different ways. The more GGG hesitates, the more time he gives Canelo to think. And Canelo is the faster, quicker fighter. He’s the better counterpuncher and he has the better fast-twitch fibers. If the guy’s got a little more talent, the way you overcome that is with savagery!