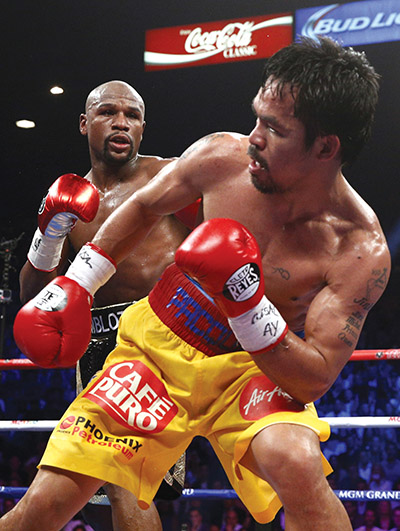 The master of stealing the spotlight, Floyd Mayweather did it again with a video he posted the morning of the biggest fight of the year, Canelo vs. GGG 2.

In the video, Mayweather meets up with his former — and apparently future — nemesis Manny Pacquiao while at a music festival in Tokyo, and the two discuss a rematch of their May 2015 fight that shattered revenue records.

“I’m coming back in December,” Mayweather said, before he shook his hands with Pacquiao and shouted his mantra “easy work.”

When contacted to confirm the fight, Mayweather Promotions CEO told The Ring, “When have you ever known Floyd to say something he didn’t do?” Mayweather maintains a relationship with Showtime, and the fight would certainly be broadcast on the network’s pay-per-view arm. The welterweight fight is being pegged for Las Vegas, the site of their first bout and Mayweather’s longtime hometown, a source told The Ring.

“I have the belt,” Pacquiao (60-7-2, 39 knockouts) said, referring to the secondary welterweight title he won with a knockout of Lucas Matthysse in July. The former eight-division titleholder wrote “50-1” on social media, a reference to Mayweather’s perfect record he hopes to blemish.

“I’m going to take it from you like I did before,” Mayweather (50-0, 27 KOs) replied. “We gonna take the belt. We gonna get the payday. And I don’t want no shoulder excuses.”

I’m coming back to fight Manny Pacquiao this year. Another 9 figure pay day on the way @mayweatherpromotions

Once the two best pound-for-pound fighters in the sport, the all-time greats’ meeting in 2015 generated 4.6 million pay-per-view buys, even if the matchup didn’t materialize when each boxer was at his peak. Mayweather cruised to a decision, and Pacquiao blamed a torn right rotator cuff, an injury the Filipino said occured in sparring.

Since then, Mayweather has fought twice and announced his retirement after each bout. He scored a shutout victory over Andre Berto in September 2015, and then returned for a massive-money novelty fight with UFC star Conor McGregor in August 2017 which he won via 10th-round stoppage.

That bout generated 4.4 million pay-per-view buys, second all time. A rematch with Pacquiao, even if interest has waned considerably, figures to pull in around 2 million this time around.

Mayweather is now 41; Pacquiao will turn 40 in December. Yet they still are the two most recognizable figures in boxing, and Pacquiao proved he wasn’t washed up with his performance in July, his first knockout since 2009. Pacquiao previously dropped a controversial decision to Jeff Horn, with fans and media claiming afterward that the fighter looked shot.

Odds for the rematch between Mayweather and Pacquiao opened Saturday with “Money” at a -220 favorite and Pacquiao at +180.

And regardless of what happens, Mayweather did it again: he stole the spotlight.