David Lemieux, Spike O’Sullivan can’t stand one another and their bout could steal the show 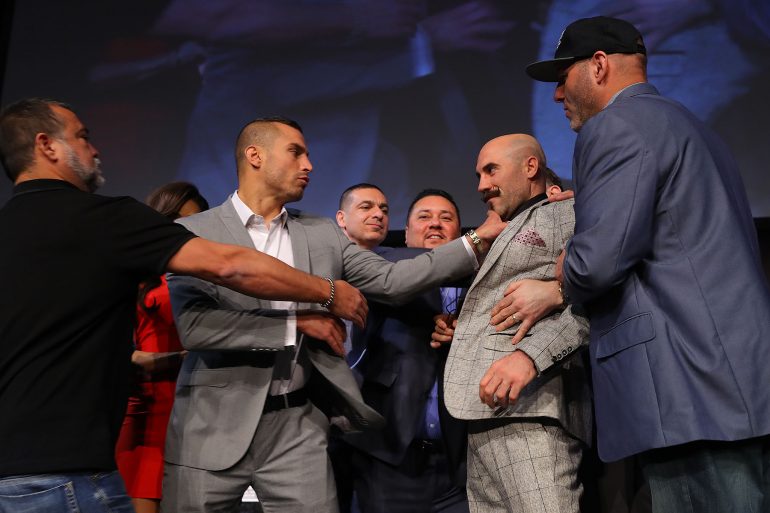 LAS VEGAS — David Lemieux makes no bones about it. He can’t stomach the sight of Gary “Spike” O’Sullivan.

Spike maintained throughout the promotion that it wasn’t personal; that Lemieux was simply in his path for a middleweight title shot, possibly against the winner of Saturday’s main event between Canelo Alvarez and Gennady Golovkin.

That all changed for O’Sullivan when Lemieux dug up the Irishman’s past Tuesday following grand arrivals. The former 160-pound titleholder referenced O’Sullivan’s 2010 arrest for domestic violence and promised to “take good care of him” when they meet in a title eliminator Saturday at T-Mobile Arena.

The matchup between fellow Ring-rated middleweights figures to be explosive. Neither guy cares much for defense, and both guys pack a punch.

“This guy’s a woman beater, that’s who I’m entering the ring with,” Lemieux, 29, told The Ring. “Kind of cowardly from a boxer. For a man to hit a woman? He’s really an ugly type of human being.

“Any man who hits a girl is a coward, period. But for a professional boxer to hit a girl when you’re supposed to know how to control your weapons, it’s a disgrace.”

O’Sullivan (28-2, 20 knockouts) seethed when he first heard Lemieux reference his past. The 34-year-old denies that he actually hit his former partner, and claims it was simply a misunderstanding over child custody (O’Sullivan was convicted of punching his ex-girlfriend). Lemieux grabbed him by the neck at Thursday’s news conference and it’s clear this isn’t simply histrionics meant to build hype for a fight. These guys truly hate each other, and they know what’s at stake: at the very least, a notable 160-pound fight in the near future.

O’Sullivan was considered a journeyman before he scored a career-best victory over former top prospect Antoine Douglas in December with a seventh-round knockout (a win that earned him a spot in The Ring’s middleweight ratings.) That was the same night Lemieux (39-4, 33 KOs) was shut out by middleweight titleholder Billy Joe Saunders, who himself also dominated Spike in 2013.

A loss for either man would be devastating and would effectively finish them off as legitimate contenders. So yeah, add the high stakes to the vitriol, and mix it up with their combustible styles, and we have a bout that could grab fight of the year consideration.

“He’s scared and he’s trying to aggravate me,” Spike said. ” … I’m going to lay a helluva beating on him on Saturday night. He’s a quitter. When you put the heat on, he quits, and I’m going to beat the s— out of him.”