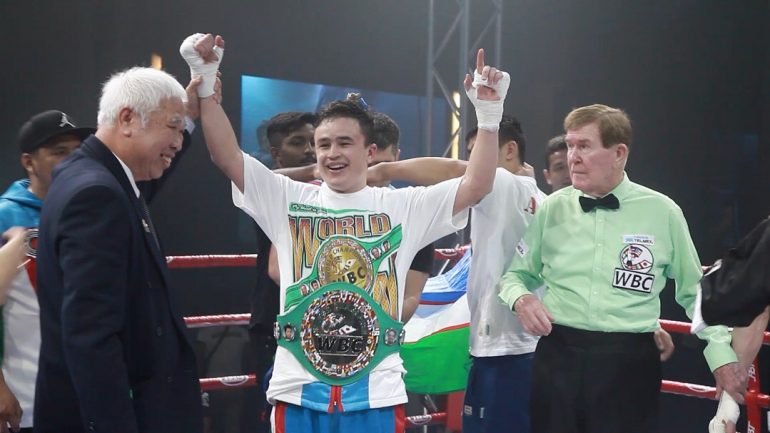 It was a big weekend for the welterweights with three significant battles taking place on Saturday.

Shawn Porter edged Danny Garcia on points to claim the vacant WBC title. Amir Khan scored a wide decision over Sammy Vargas but, once again, appeared fragile. And, on the Porter-Garcia undercard, Yordenis Ugas and Miguel Cesar Barrionuevo faced off in a forgettable WBC eliminator which Ugas won by near shutout.

One interested observer was world-rated 147-pounder Qudratillo Abdukakhorov (15-0, 9 knockouts) who will be looking to break into top level over the next year or so. The recently turned 25-year-old, who hails from Uzbekistan, is currently training in Los Angeles.

“I enjoyed Porter and Garcia, that was a great fight,” Abdukakhorov told The Ring through manager Vikram Sivapragasam on Sunday morning. “It was very close and either could have won. I hope I get the chance to fight Porter. We met a few years ago in Las Vegas and he was very respectful, but my goal is to win a world title and to face him would be an honor.

“Khan and Vargas was good. Both went down, but Khan had too much for Vargas. I would be interested in fighting Khan. In the U.K., he is a big star.”

Abdukakhorov’s manager, Vikram Sivapragasam, a Malaysian businessman, provided an update on his fighter and shared his thoughts on the welterweight scene.

“Qudratillo is having a very good camp in America,” said Sivapragasam. “He is a hard worker and seems to be enjoying the experience. We should have some fight news soon. We are working toward a world title.

“It was interesting to see the big welterweight fights on Saturday and, having seen them, I think Qudratillo is right in there with any of those guys.”

Sivapragasam’s partner, Cameron Dunkin, who stepped away from his duties as a highly successful manager to help found Now Boxing Promotions, is excited for the future.

“We’re moving forward every day,” said Dunkin. “We have a very good stable; top young fighters as well as guys who are ready for big fights now. Qudratillo is one of them. He’s come over to America and really upped his game. He’s the boogeyman of the division. He doesn’t have the profile his talent deserves just yet but we’re working on that.

“He’ll fight in the fall, and I absolutely believe he’ll fight for the world title in 2019.”