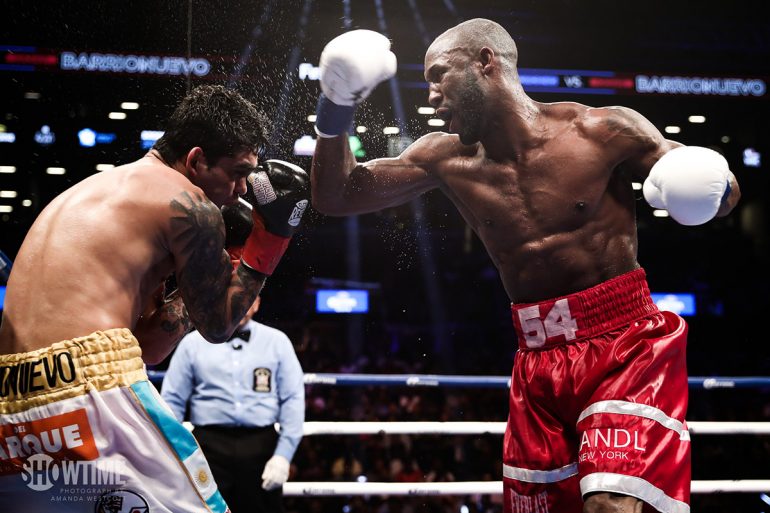 NEW YORK – Before we find out who the next WBC welterweight titleholder will be, we learn who the champion’s first likely challenger is.

Yordenis Ugas outclassed an overmatched Cesar Miguel Barrionuevo in the title eliminator, outpointing the Argentinian by scores of 120-108 on two cards and 119-109 on the third.

It was an uneventful fight, which was behind the eight ball due to the Serrano-Reynoso and Kownacki-Martin thrillers which preceded the bout on the card. The crowd at Barclays Center in Brooklyn, N.Y. turned on the fight early, and let their impatience be known with sustained booing.

The fans did find something they detested more than this fight, booing Adrien Broner even louder when he was featured on the overhead screen after the seventh round.

Ugas (23-3, 11 knockouts), a Cuban now based in Miami, never let on that he was unnerved, pushing forward throughout the night with digging body shots and overhand rights against the reticent southpaw Barrionuevo (34-4-2, 24 KOs), who spent much of the first half of the fight circling away from Ugas’ attack.

Barrionuevo attempted to get some offense in by coming forward later but mostly fell short of the technically sound Ugas.

“I have had some difficulties in my life. I’m back and I’m moving forward. I’m ready for whoever comes my way. I’m ready for a title,” said Ugas, who has now won eight straight since suffering back-to-back decision losses.

Ugas has now positioned himself for the winner of the Danny Garcia-Shawn Porter winner in the main event.

“I want the winner of Danny Garcia vs. Shawn Porter. I’m here to compete with the top level guys in the sport,” said Ugas.