The boxers for the Superfly 3 card all weighed in under the “superfly” weight limit of 115 pounds.

Juan Francisco Estrada, a former unified flyweight titleholder, and his Mexican compatriot Felipe Orucuta weighed in at 114.4 and 114 pounds even, respectively, for their 12-round bout which headlines the HBO-televised card from The Forum in Inglewood, California. The broadcast begins at 9:45 PM ET.

Estrada (36-3, 25 KOs) is coming off a spirited challenge of WBC titleholder Srisaket Sor Rungvisai on the Superfly 2 card, while Orucuta (36-4, 30 KOs) has won five straight against lesser opposition.

The lone world title fight of the card pits Donnie Nietes and Aston Palicte, vying for the WBO title which was vacated by Naoya Inoue earlier this year. Nietes (41-1-4, 23 KOs), who is seeking to become just the third Philippine-born boxer to win world titles in four divisions, weighed in at 114.8 pounds while the taller Palicte (24-2, 20 KOs), also of the Philippines, weighed 114.6 pounds for his first ever world title opportunity.

Highlighting the untelevised portion of the card is Louisa Hawton (8-1, 4 KOs) of Perth, Australia against Brenda Flores (12-4-1, 2 KOs) in a 10-round bout for the interim WBC strawweight title. Hawton weighed 101.8 whle Flores weighed 102.4 ahead of their bout which would in theory place the winner as the next challenger to the full champion, Tina Rupprecht of Germany.

Below are photos from the weigh-in by Jhay Oh Otamias. 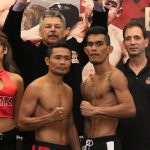 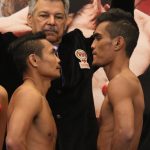 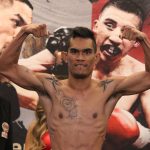 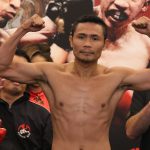 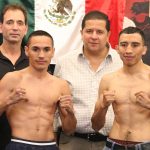 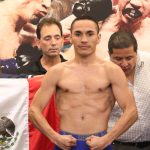 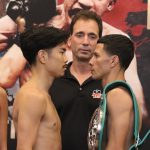 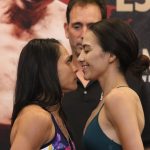 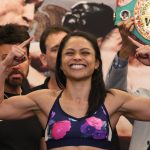