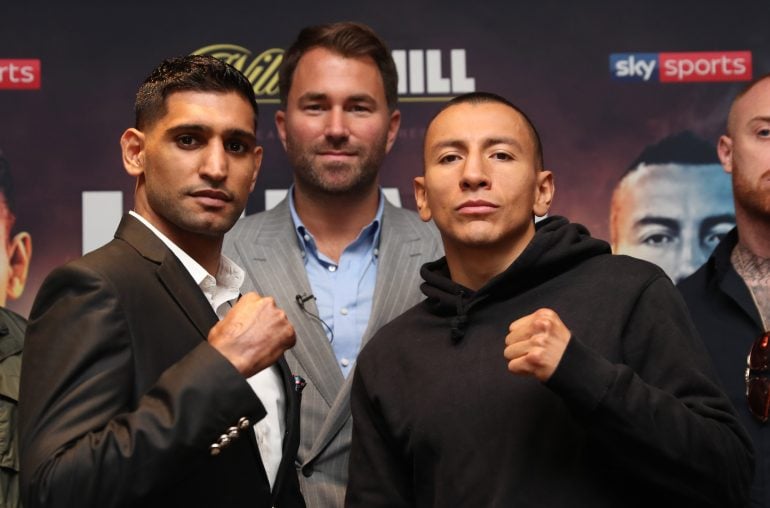 We need a fight this time.

This Saturday, Khan takes on Columbian boxer-puncher Samuel Vargas in Birmingham, England, over 12 rounds at welterweight. Like Lo Greco, Vargas sports an impressive enough record in terms of numbers (29-3-2, 14 knockouts), but, in a nine-year professional career, he has yet to defeat a distinguished opponent. Reigning IBF titleholder Errol Spence stopped him in four and former two-weight world titleholder Danny Garcia stopped him in seven.

Regardless, Khan, who is now being trained by acclaimed coach Joe Goossen, promises that he has left no stone unturned in terms of preparation.

“It’s been a tough training camp,” said the ex-champion. “I’ve spent round about 10 weeks in Los Angeles and it’s the first time that me and Joe have spent a full camp together. We’re going to be ready for this fight, and I’m glad the team on my left (Team Vargas) is talking and they’re confident. They’re making the fight more exciting.

“I know I’ve got everything it takes to win this fight. I’m not seeing Vargas as another Lo Greco. They might be from the same country but that doesn’t mean anything. I’ve trained like this is a world title fight because I know where this can take me.”

Vargas, who is coming off a 10-round majority draw against Mauro Godoy, is at least talking a good game.

“There’s no doubt in my mind that I will be victorious on Saturday night,” said the visitor. “I don’t care how I do it. I don’t care if it’s by knockout, or if it goes the distance, or if I break his ribs. In my heart, I think it, I dream it, I pray about it and I’ll win. I think Amir is an old man and he’s over the hill. I think he’s been damaged a lot and he knows that if I touch him, he’s going to get hurt. If I clip him with something, he will get hurt.”

The show will be broadcaast in the U.K. on Sky Sports Action from 7.00 p.m. local time and will also be streamed live on the DAZN Facebook and Twitter pages in the U.S.