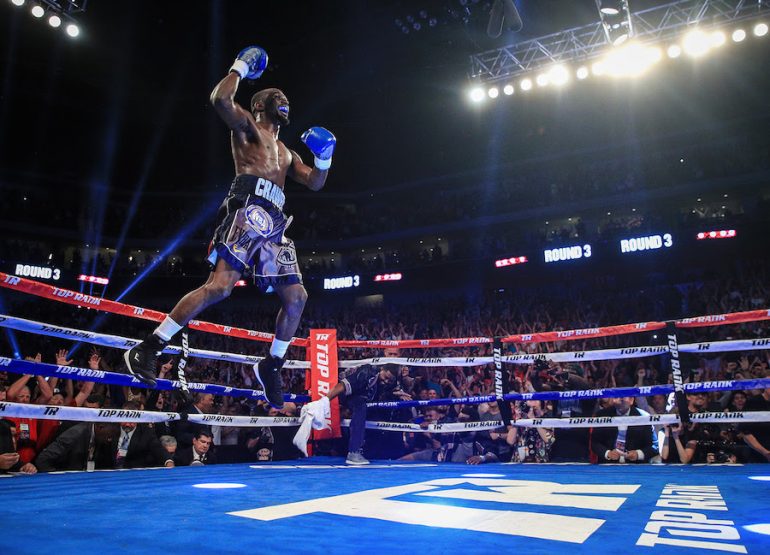 Bob Arum and Co. ensured the welterweight titleholder will be in the Top Rank stable for the foreseeable future with a new multi-year agreement that was announced Thursday. Financial terms were not disclosed, but Crawford’s minimum purse for each fight exceeds $3 million, a source familiar with the deal told The Ring.

Crawford is No. 2 on The Ring’s pound-for-pound list, and now that he’s being featured on ESPN programming regularly, his star continues to grow. He’ll make the first defense of his 147-pound belt in an October 13 fight against contender Jose Benavidez Jr. Crawford’s title victory over Jeff Horn in June was streamed on ESPN+; the bout with Benavidez returns “Bud” to ESPN.

The upcoming event also returns Crawford to Omaha, Nebraska, the first fight in his hometown since a December 2016 victory over John Molina Jr. Crawford became the undisputed junior welterweight champion with a third-round knockout of Julius Indongo in August 2017, and while that fight took place in Nebraska, it was in Lincoln, not Omaha.

Crawford, along with Vasiliy Lomachenko, are the lone stars on the Top Rank roster, and with 54 dates coming on ESPN next year, Top Rank will continue to feature them prominently.

There’s no denying Crawford’s immense talent, but to reach the next level and possibly crossover into the consciousness of the mainstream sports fan, he needs a truly marquee bout.

A fight with fellow welterweight titleholder Errol Spence Jr. looms as such an event, but there’s a hold-up. There always is in boxing. Spence is a PBC fighter, and will compete on Showtime/Fox, two networks with which manager Al Haymon just wrapped up lucrative long-terms with.

In fact, Haymon ostensibly controls the star-studded division. The Ring’s No. 1 welterweight, Keith Thurman, is an Al Haymon fighter. Shawn Porter and Danny Garcia, who fight for a vacant 147-pound title Saturday on Showtime, are also part of PBC.

If Crawford (33-0, 24 knockouts) is going to secure the career-defining fight he so badly desires, Arum and Top Rank president Todd duBoef will have to break down some walls.

“I am the best fighter in the world, hands down. ESPN is the biggest brand in sports and Top Rank is the biggest promotional company in boxing,” said Crawford. “This was a no-brainer for me and my team. All of the super fights that the world wants to see will happen. Mark my words. Like I’ve said before, I want all of the champions in the welterweight division.

Crawford is 30, and he’s yet to step in the ring with another A-level boxer. Benavidez certainly won’t change that distinction. That’s partially due to the lack of talent in the weight classes Crawford reigned over: lightweight and junior welterweight. Now that Crawford is a full-fledged welterweight, there’s no excuses.

For years, the 147-pound division has been one of boxing’s most recognizable. But Top Rank has traditionally been reluctant to match it’s elite-level talent with fellow top-flight boxers who are signed to different promoters. Crawford’s manager and trainer, Brian McIntyre, swears his fighter will secure such bouts.

“If you think you’ve seen the best of Terence Crawford, you ain’t seen nothing yet,” McIntyre said. “To all the pretenders out there who want a piece of him, you’ll get what is coming.

“With Top Rank and ESPN in our corner, we are going to make some of the biggest fights in the history of boxing. We will continue to show the world that Terence ‘Bud’ Crawford is one of the greatest fighters to ever lace up a pair of gloves.”

Of course, it takes two: Haymon also must be willing to match one of his welterweight titleholders with Crawford. Network politics must be bridged. It won’t be easy, but it’s been done before. HBO and Showtime came together to produce a joint pay-per-view in order to finalize Floyd Mayweather-Manny Pacquiao.

It’ll take something similar to push a fight like Crawford-Spence across the finish line.