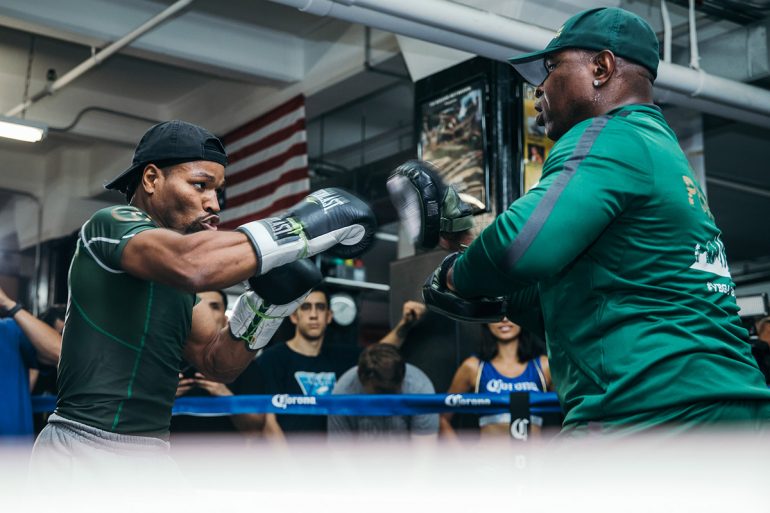 NEW YORK – At many media workouts, the principals seemingly engage in a competition to see who can reveal the least in front of cameramen and reporters.

If that was the idea, then score Wednesday’s session for Danny Garcia.

Garcia, who faces Shawn Porter on Saturday, September 8 at Barclays Center in Brooklyn, showed off his chiseled physique but limited the action to some light shadowboxing while his trainer/father Angel engaged in banter around the ring.

At one point the two showed their sense of humor by mimicking the sparring action leaked last week of Porter working with former champ Shane Mosley. Among those in attendance to support Garcia was rapper Maino, a Brooklynite whose biggest hit was 2008’s “Hi Hater”.

Garcia promises to be all business once the bell rings, with the vacant WBC welterweight title on the line.

“This is a very important fight for me. This fight is an opportunity to prove that I’m still one of the best fighters in the world. I’m coming to get my belt back,” said Garcia (34-1, 20 knockouts), who bounced back from his unification fight loss to Keith Thurman with a knockout of Brandon Rios this past February.

“Shawn’s style is exactly what I like to go up against. I want him to come forward and walk into my counter punching. I have power in both hands and I’m going to make him feel it.”

Porter (28-2-1, 17 KOs), by contrast, treated the workout as if it was an introduction to the public, showing off his speed and combination punching on the mitts with his trainer/father Kenny Porter while hinting at some of the moves he may attempt against Garcia if he gets him cornered.

“I think that my ability to mix it up is going to create a problem for him. The variance in my styles and punches is going to be too much for him. I’m going to keep him on his toes, keep him guessing and keep him off balance. That’s the key to winning Saturday,” said Porter, a former IBF welterweight titleholder.

“It’s going to be everything I do that will help me get this win. It’s the work rate, power and a different level of speed than he’s used to. Nobody has my combination of that power and speed.”

Garcia, himself more of a counterpuncher, seemed to accept that Porter would try to get inside and rough him up, but says he has a plan for the Ohio native if he goes that route.

“I know he’s going to try to jab his way in. Shorter guys like him tend to go to the body too. He has skills but I’ve had great preparation to be ready for any of it. We have some stuff up our sleeve,” said Garcia.

“If he comes and opens up, I’m going to land a clean shot early. If he can’t recover, then I’m going to have a chance to finish him. I’m going to dictate the pace and fight my fight.”

Porter has won two straight since his own close loss to Thurman in 2016 and isn’t deterred by Garcia’s confidence.

“I just don’t think Danny can handle me. He says I’m tailor-made for him, but we’ll see on Saturday night,” said Porter.

The fight will headline a triple-header on Showtime Championship Boxing, with the welterweight non-title clash between Yordenis Ugas and Cesar Miguel Barrionuevo, plus Adam Kownacki vs. Charles Martin also to be televised.