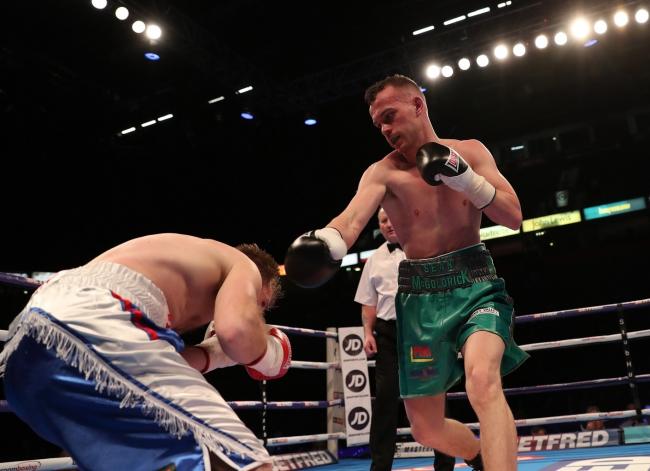 McGoldrick (right) opens up on Brett Fidoe in his professional debut. Photo by Lawrence Lustig
05
Sep
by Anson Wainwright

Best night of pro career and why: McGoldrick is most pleased with his points win over the previously unbeaten Dylan McDonagh last time out. It was also his first professional fight in Wales.

“He was probably my best opponent and I showed a little more,” McGoldrick told The Ring. “I’ve got better with each fight and I think I’m starting to really come into my own.”

Worst night of pro career and why: Although McGoldrick won five of the six rounds against Ricky Starkey in their June 2017 fight, he was disappointed with his performance.

“My second fight was a big wake up call for me,” said McGoldrick. “I was the live float. I was ready, then I wasn’t ready. There was a lot of messing about. I lost the weight for the weigh-in and didn’t refuel properly.

“I’ve made some big changes and tried to improve myself so that I can reach my potential.”

Next Fight: McGoldrick will face Nicaraguan hard man Cristian Narvaez over six rounds at the Vale Sports Arena in Cardiff on Friday.

Having only been stopped once, Narvaez (15-9-3, 1 KO) should present McGoldrick with a few problems. The 23-year-old journeyman has already been on British shores twice over the summer, losing to prospects Sunny Edwards and Jay Harris.

“I’ve seen a little bit of Cristian Narvaez and he comes to win,” acknowledged McGoldrick.

“The way Narvaez boxes, I think it’s going to make for an exciting fight. Hopefully I can put on a great performance.”

Why he’s a prospect: McGoldrick was a highly accomplished amateur and was part of the Team GB amateur setup for six years.

He won multiple Welsh senior titles but came up short in a brace of British Championships losing to Luke Campbell and Qais Ashfaq.

The highlight of McGoldrick’s amateur career came at the 2010 Commonwealth games when he won gold.

He also competed at two World Championships and gained invaluable experience going 4-3 in the World Series of Boxing (WSB).

Since making the leap into the professional ranks, McGoldrick has sparred with Kal and Gamal Yafai, Lee and Andrew Selby, Jamie McDonnell and Carl Frampton.

Despite his modest 29-percent knockout ratio, the eager young prospect still believes that power is one of his strengths.

“Ring generalship and I’m quite a big puncher for my weight,” McGoldrick said. “I don’t think I’m getting my punches off correctly yet and when I do, I think I’ll start having a bigger impact on people. As soon as I start getting that right, I think that will be my biggest attribute.

Why he’s a suspect: McGoldrick trained with Tony Borg from the age of eight but elected to join former world champion turned trainer Gavin Rees before his last fight. That may help aid the transition.

Storylines: McGoldrick was born and bred in Bettws, a housing estate in Newport, and is of Irish descent.

He began boxing at eight years old after following his older brother, Liam, to the gym.

“We used to live on a normal estate,” McGoldrick explained. “As a child, I had so much energy. I was always on the go. We used to get in a bit of trouble on the estate, and I think going to the gym was a way for me to vent my anger.”

After Liam made it onto the Welsh amateur boxing squad, Sean soon followed. However, when Liam eventually gave up the sport, due to bad hands, Sean continued and got on the Team GB squad at 18 years old.

McGoldrick’s boxing hero is Mike Tyson and he likes to watch Vasiliy Lomachenko. His own goal is to become a world champion.

“Regardless of whether I make it or not, that’s always going to be my target. I know I have a long way to go, and there’s a lot more work and fights, starting with September 7, but it’s definitely one-million-percent [my target].”

McGoldrick will watch the World Boxing Super Series bantamweight tournament that begins next month with intrigue. “It’s tough to say (who will win),” he said. “You have the top four: [Naoya] Inoue, [Ryan] Burnett, [Zolani] Tete and [Emmanuel] Rodriguez. I think they four are the best. I think they’re as good as each other. It’s so difficult to say who will come out on top.”

McGoldrick has a long-term girlfriend of 10 years and they recently moved in together. He lives the life but enjoys rugby and supports Celtic in soccer.