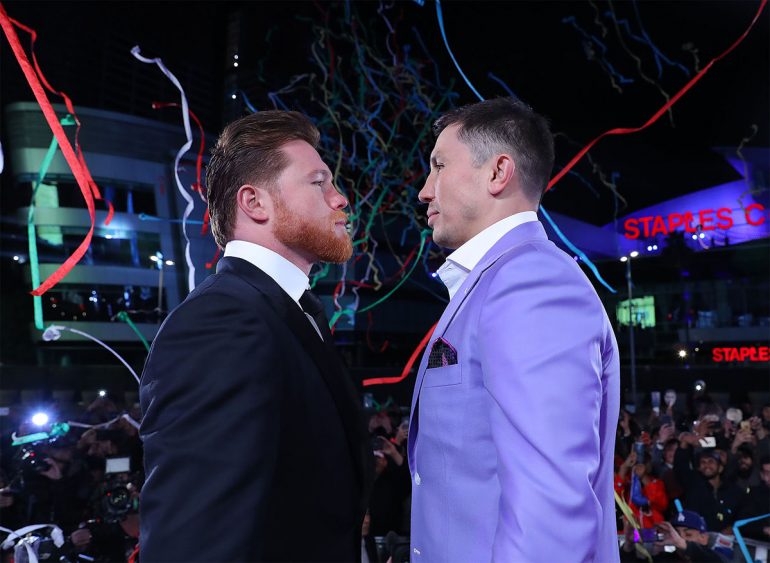 For weeks, fans had been asking us via social media if The Ring’s vacant middleweight title will be on the line when Canelo Alvarez and Gennady Golovkin fight their anticipated rematch on September 15. We posed the question to the Ratings Panel, which, in a landslide, voted in favor the magazine’s 160-pound championship being up for grabs when the two stars clash at T-Mobile Arena in Las Vegas.

In case you’ve been living under a rock in recent months/years, Alvarez won The Ring middleweight title when he outpointed Miguel Cotto in November 2015 and held it until his first bout with Golovkin last September, which ended in a controversial draw.

Unfortunately, the controversy didn’t end with the scorecards, as Alvarez tested positive for the banned substance clenbuterol shortly after their rematch, originally set for May 5, was officially announced, ultimately resulting in the Nevada Athletic Commission (NAC) to suspend him for a six-month period (retroactive from the first positive test). Alvarez denied any wrong doing, claiming the positive test was the result of food contamination, while cooperating with the NAC and eventually agreeing to join the WBC’s Clean Boxing Program and undergo year-round VADA testing. However, the NAC’s mandatory suspension meant that he had to be stripped of The Ring title and dropped from the rankings, per the magazine’s PED policy at the time.

Here’s how the subject was presented and discussed among the Panel and Editorial Board (which consists of Associate Editor Tom Gray, Managing Editor Brian Harty and Yours Truly):

“The subject of the vacant Ring middleweight title has raised its head and we need to make a decision on whether or not it’s up for grabs on Sept. 15,” Gray posed to the Panel via group email.

Canelo was stripped of the title

Normal procedure is No. 1 vs. No. 2 (or No. 3 if deemed worthy) for a vacant Ring championship

However, this is the consensus best middleweights in the world squaring off. The question is, will the belt be at stake?

Can we have as many responses as possible please?

Incidentally, although I’m not comfortable all the way, my answer is yes.”

“I vote yes, mainly because I think it sucks if Golovkin is unable to fight for it due to Canelo’s negligence, but also because Canelo had (in my opinion) a solid alibi for his PED positive test and he cooperated fully with the commission going forward, on top of his enrollment in VADA and the WBC’s CBP since his suspension, which ended a couple weeks ago.”

“I would also vote yes for reasons that are all outside the rules. It’s the two best middleweights in the world, and nothing has changed in that regard since the last fight when the belt was up. Like Doug said, it would totally suck if GGG didn’t have the chance to win it, because he has always complained that The Ring was biased and it would be another slap in the face. It gives him a chance to be the true champion and it gives Canelo the chance to win it back on fair ground. If it sounds like the rules are being ignored, whatever. People will complain either way. I personally think the winner wearing the belt is more important than the rules about ratings in this case.”

“Put me in the yes column as well, given the No. 2-rated middleweight (Daniel Jacobs) has already been defeated by GGG, as well as there is little argument for him (to fight for the belt). Plus, as someone stated already, why punish GGG for Canelo’s mistake?”

“This is one of those occasions where a slight bending of the typical procedures/rules does make sense.

“As noted above, GGG is already seen by most as ‘the man’ at 160, and many see Canelo as the second or third best in the division with Daniel Jacobs. Despite Canelo’s negligence in the clenbuterol scandal, his announcement to go VADA 24/7/365 is a game changer. It’s what Floyd Mayweather claimed he was going to do but never did. It’s legitimate Olympic style PEDS testing.

“I say this fight is worthy of The Ring title. Just for fun, I’m running a poll on Twitter and over 600 fans have already voted. Will give you guys the final results later.”

“I’ll be THAT GUY and vote no. (By the way, on my honeymoon in Greece), but rules are there for a reason and our rules wouldn’t have teeth if we immediately elevate the winner.”

“My answer is yes; 99 percent of people perceive this to be the best two middleweights in the world.”

“Here’s the voice of the fans on this issue. Well, at least on my tiny little profile, lol. The majority seem to agree with most of us that The Ring title should be up for grabs.” 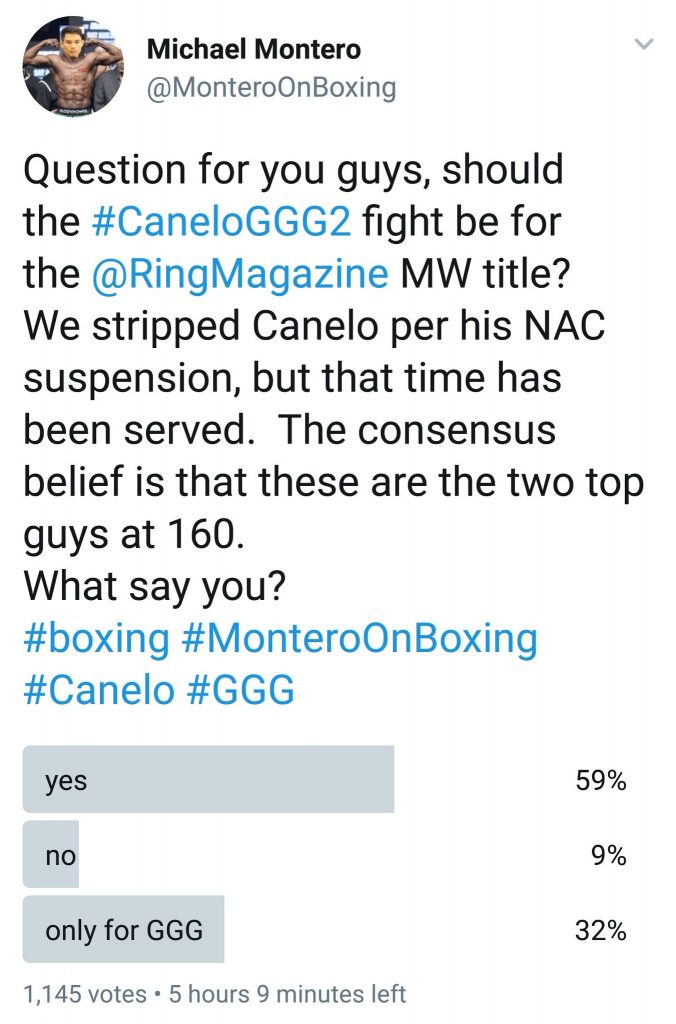 “My argument will be that Golovkin is the consensus champion, anyway, so if Canelo (whom many perceive as the lineal champion) can defeat him, well then he gets the honors. I’m for it.”

Francisco Salazar and Diego Morilla also voted in favor of The Ring title being on the line.

Pedro Guevara, the No. 5-rated junior flyweight, stopped Roberto Sanchez in 10 rounds on September 1 for a fringe 115-pound title, so he exits the 108-pound rankings and Randy Petalcorin (29-2-1, 22 knockouts) enters at No. 10. The 26-year-old Filipino standout is scheduled to fight No. 6-rated Felix Alvarado on October 21 for the vacant IBF title.

Wanheng Menayothin, the No. 1-rated strawweight, retained his WBC title by outpointing Pedro Taduran and improved to 51-0. The “Thai TBE” obviously remains in the top spot. Sadly, it was recently revealed that No. 8-rated Ryuya Yamanaka suffered a brain bleed during his WBO title loss to No. 5-rated Vic Saludar and has retired from the sport. DeeJay Kriel (14-1-1, 6 KOs), a 23-year-old South African prospect, enters the 105-pound rankings at No. 10.

Heavyweight – No. 10-rated Tyson Fury advanced to No. 7 with his second comeback fight, a rust-shaking 10-round decision over former title challenger Francesco Pianeta.

Lightweight – Mikey Garcia switched places with Jorge Linares, moving from No. 2 to No. 1, on the strength of his unanimous decision over No. 3-rated Robert Easter Jr. that unified the WBC and IBF titles. Jose Pedraza advanced from No. 10 to No. 4 with his WBO-title winning decision over Ray Beltran, who dropped to No. 7.

Junior lightweight – Unrated Masayuki Ito entered the rankings at No. 7 with his unanimous decision over Christopher Diaz, who dropped out of the top 10.

Junior featherweight – Streaking Isaac Dogboe switched places with the inactive Guillermo Rigondeaux, hopping from No. 2 to No. 1, following his first-round blowout of Hidenori Otake.

Flyweight – Christopher Rosales switched places with fellow beltholder Sho Kimura, jumping from No. 5 to No. 4, after his impressive body shot KO of Paddy Barnes.