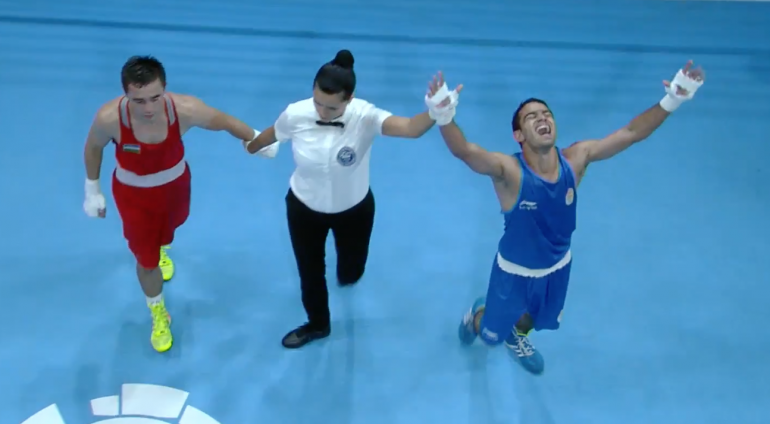 Amit Panghal scored the upset of the night with a split decision over 2016 Olympic gold medalist Hasanboy Dusmatov.
01
Sep
by Ryan Songalia

Hasanboy Dusmatov may have been the golden boy of Rio 2016, but he’s found it difficult to bring home the top prize in recent tournaments.

The Olympic gold medalist and Val Barker trophy winner lost to an Indian boxer for the second time since June, settling for the junior flyweight silver at the 2018 Asian Games after losing a 3-2 split decision to Amit Panghal on Saturday in Jakarta, Indonesia.

Dusmatov also fell short in the President’s Cup semis this past June in Kazakhstan, losing on points to N Lalbiakkima of India.

Amit, 22, used his reach and movement to keep Dusmatov, 25, off balance, forcing the Uzbek to reach in for his offense and catching him with southpaw lefts and counter right hooks when he stepped in. A left hand high on the head caused Dusmatov to touch the canvas but no knockdown call was made by the referee. Sensing he was behind, Dusmatov pushed the action in the third round but couldn’t make up the gap.

It was an inauspicious start for Uzbekistan to the boxing finals in Jakarta, Indonesia, but they’d have plenty of opportunities to salvage the day as they participated in all seven of the men’s gold medal matches.

Uzbekistan copped its first gold in the flyweight final in the second finale of the day as Jasurbek Latipov won a headbutt shortened decision against the Philippines’ Rogen Ladon. The bout was stopped 22 seconds into the second after an accidental headbutt opened up a fresh cut on the face of the head clash addled Ladon. Though little boxing had occurred in the 15 seconds of second round combat, four of the five judges saw fit to score the round for Latipov, awarding him a 3-1 verdict.

The loss means the Philippines ended the 2018 Asiad without a boxing gold for the second straight Asiad, suffering a shortfall that mirrors their 2002 and 2014 campaigns. The country earned two bronzes to go along with Ladon’s silver from middleweight Eumir Marcial and junior flyweight Carlo Paalam.

Uzbekistan’s only other loss on the men’s side of the tournament was in the lightweight final, as Mongolia’s Erdenebat Tsendbaatar won a 3-2 decision over Abdurasulov Shunkor.

The first women’s gold medal match ended in controversy as North Korea’s Pang Chol-mi pushed the fight for all three rounds and was the busier puncher, but ended up on the short end of a 3-2 decision to China’s Chang Yuan.

The North Korean delegation didn’t take the dubious verdict well, staging a protest and refusing to leave for several minutes as a ringside official threatens that they will be “barred from boxing” if they did not vacate the ring.

Dramatic protest by North Korea after Chol Mi Pang loses a controversial 3-2 decision to China’s Yuan Chang in the women’s flyweight gold medal match. Officials threaten that they will be “barred from boxing” if they don’t leave the ring #AsianGames2018 #AsianGames #boxing pic.twitter.com/Ug7NXnhJ5A

Pang sat in the ring, removed her shoes, and performed some floor stretches before leaving with her coach.

China repeated their victory in the following match when Yin Junhua defeated North Korea’s Jo Son Hwa by a score of 4-1 in the women’s featherweight final. There was no dispute following this announcement of the decision.

The Asian Games has served as a preview for some of the talent which will be on display for the following Olympics. Five of the medalists from the 2014 Asian Games also earned medals at Rio 2016.