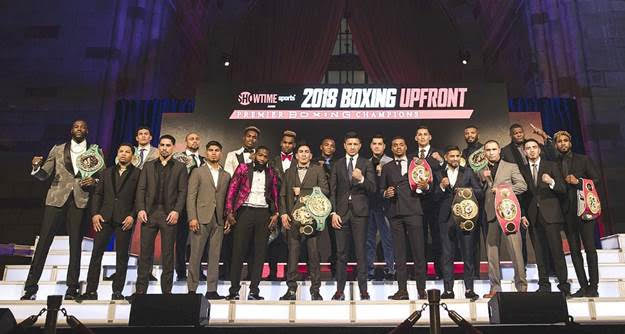 When Stephen Espinoza took the reins at Showtime Sports almost seven years ago, he wasn’t sure if he would make for a good television executive.

The higher-ups at CBS, he figures, weren’t sure if he would be a good hire, either. After all, Espinoza had never worked in TV before; his professional experience in sports came as an attorney for Golden Boy Promotions.

Fast forward to August 2018, and as we approach Labor Day, Showtime is the standard bearer of boxing programming in the United States. For the greater part of the last 40 years, HBO has owned the best stable in boxing and broadcasted the biggest fights.

Now, their budget has shrunk to roughly half of Showtime’s, and together with Al Haymon and Premier Boxing Champions, Espinoza’s commitment to boxing is stronger than ever.

Showtime struck a new three-year deal with PBC on Thursday, it was announced by the network, and the agreement isn’t simply an extension of their current union. The partnership, which runs through 2021, calls for a “significant expansion of live boxing programming”; the sport will be offered monthly on the network.

Espinoza told The Ring that Showtime “will definitely be committing more resources both financially and personally and technically than at any point in the recent past.” He declined to reveal what the boxing budget’s ballooned to, but promised that the network will televise more fights than any other time in their 32-year-history — 30 live telecasts in all.

Showtime is home to the greatest collection of fighters in the sport; Errol Spence Jr. and Mikey Garcia, who both appear on The Ring’s pound-for-pound list, fight exclusively on Showtime. So, too, does heavyweight titleholder Deontay Wilder, who will meet Tyson Fury on Showtime Pay-Per-View later this year.

“We’ve seen the development of stars very quickly. Viewership is growing. Subscriptions are growing. Free trials are growing; direct, tangible indicators (of success),” Espinoza, the President of Sports and Event Programming for Showtime, told The Ring.

“That’s a better advocate for the continued expansion of boxing programming than anything I or anyone here could possibly offer. … The proof is in the pudding.”

It’s not lost on Espinoza that when PBC launched in March 2015, fans and media alike were tossing dirt on Showtime as a major player in the sport. The thinking: All of the best fighters in Al Haymon’s stable would compete on NBC, Fox and ESPN under the landmark deal.

The logic was sound. Haymon promised to flip the model by buying time on tentpole networks and when the executives saw the strong ratings boxing was producing, they would surely provide meaty license fees. Espinoza remained cool; he was confident that top fighters like Wilder and Keith Thurman would return to Showtime, and would do so as bigger stars following their greater exposure on free TV.

PBC, as it was originally formatted, quickly flamed out, and the fighters indeed continued to compete on Showtime. Now, there’s plenty of industry chatter that PBC has struck a new deal with Fox, and this time, Haymon will receive license fees for his content.

If another partnership indeed materializes with PBC, regardless of which network joins Showtime, Espinoza has “confidence that everyone is going to get their fair share.”

“We’re asking PBC to provide different things and more things than they have in the past,” he said, “and we’ll be asking other content providers and other boxing promoters to do the same.”

Espinoza, in turn, is asking the same of himself and his staff. There’s going to be more work than ever, beginning with Showtime Boxing Upfront in January, where they’ll present all the best fighters on the roster along with matchups, and in some cases, simply dates and locations.

It’s a concept Showtime trotted out seven months ago, and the event was impressive; 21 world-class boxers on stage in New York, suited up, and ready to provide sound bites.

The event created plenty of buzz, and gave Showtime a head start on promotion for their first-half schedule, a departure from the way boxing promoters and networks usually conduct business; fights are typically announced piecemeal.

“We set the bar pretty high with the last upfront,” said Espinoza, an unabashed boxing fan who freewheels on Twitter with thoughts ranging from politics to his beloved Dallas Cowboys. “We had a lot of fighters there; we had great turnout, which is saying a lot when it’s the first year of everything. Everyone we wanted was there, they were dressed well and on time.”

Punctuality in boxing? That is saying a lot. More so, the fights delivered. The junior middleweight unification bout between Erislandy Lara and Jarrett Hurd is the leading candidate for fight of the year. Wilder’s come-from-behind knockout of Luis Ortiz is another strong contender.

The light heavyweight championship fight featuring Adonis Stevenson and Badou Jack was a war, and there’s still four months left. Danny Garcia and Shawn Porter will vie for a welterweight title a week from Saturday in New York, and the 147-pound bout figures to be another barnburner. And then there’s the highly anticipated fight between Wilder and Fury, and it while it might not produce fireworks in the ring, the pre-fight banter will be unmatched.

Showtime’s success is unrivaled at the moment, but there’s more competition between boxing platforms than ever before. ESPN announced a new seven-year commitment to the sport earlier this month, and then there’s the proliferation of streaming services, led by ESPN+ and DAZN, which launches on September 22 with the Anthony Joshua-Alexander Povetkin heavyweight championship fight. The fledgling service partnered up with Matchroom Sport and also boasts the World Boxing Super Series.

Overtaking HBO as the No. 1 network in boxing was one feat for Showtime; staying on top, like remaining champion, is always a bit more challenging.

“One of the side effects of developing guys and the emergence of guys, like for example an Errol Spence, or a Jarrett Hurd, who have emerged over the year really to that top top tier as their stardom grows, is their pay grows as well,” Espinoza noted.

“If the boxing budget doesn’t grow as well, then as these guys advance, you can afford fewer and fewer fights as they become stars; (the goal is) not just treading water but continuing to grow with the fighters you’re building.”

The biggest criticism of PBC’s partnership with Showtime? Inactivity. Haymon’s roster includes about 160 boxers, and approximately 20 of those are recognizable, top-tier athletes.

With only so much money to go around, these fighters have often been shelved for extended periods of time, and frustration has mounted in certain camps. The increased budget could help alleviate that issue, but it’s unlikely there will ever be enough funds to satisfy seven-figure purses for 20-plus boxers to compete three times a year.

“As much as we would like to, we know there is a limit to what we can do here,” Espinoza acknowledged. “There’s a limit at every network at every platform. It does take a collection of networks and platforms for the sport to be healthy.”

The head honcho also has his eyes set on developing more top-flight attractions. The network’s prospect-oriented series, ShoBox: The New Generation, has been a staple of Showtime’s programming since its inception in 2001.

Espinoza, though, plans to televise even more fights featuring prospects than ever before, ensuring that Showtime’s pipeline of fighters continues to expand.

“ShoBox is just the tip of the iceberg in terms of these up-and-coming prospects,” he said. “That is one area where we see a lot of opportunity: identifying and featuring these promising young prospects early on. It’s not going to be exclusively where we expand, but one area of opportunity. More big fights, more small fights, more mid-level fights in 2019.”

Music to the ears of boxing fans all across North America, who are always seeking more and more. Espinoza wasn’t confident when he took the job, but seven years later, we can say it for him: yeah, he’s pretty good at this TV thing after all.