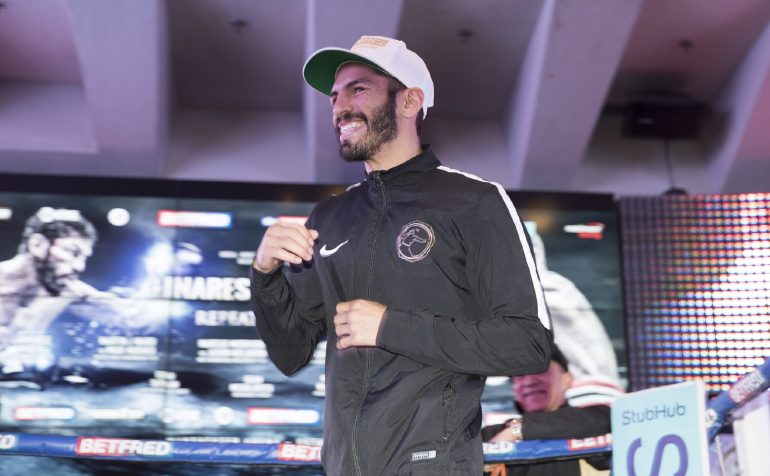 Jorge Linares, fresh off his first defeat in more than six years, is set for a return bout with his eyes on becoming a four-division champion.

The 33-year-old Venezuelan was The Ring lightweight champion when he faced Vasiliy Lomachenko in May. Linares dropped The Ring’s No. 3 pound-for-pound boxer, and was fighting him on even terms, but then succumbed via stoppage in the 10th round.

Linares will exit the 135-pound division and now campaign at 140 pounds, he announced Wednesday. His first foray at junior welterweight will take place September 29 in Indio, California, when he meets Abner Cotto in the 12-round main event of Golden Boy Fight Night on Facebook Watch.

“I am coming back hungrier than ever to demonstrate to the world that I am still one of the best pound-for-pound fighters in the world,” said Linares, who also held titles at featherweight and junior lightweight.

“I want those big fights and the world has not seen the best of me. … We will demonstrate that I am more than capable in taking over this new (140-pound) division.”

Linares (44-4, 27 knockouts) has long been recognized for his combination of speed and athleticism, and as he readies to enter a new weight class, those attributes figure to serve him well.

In the wake of Terence Crawford’s recent departure for welterweight, the 140-pound class appears wide open. Mikey Garcia held a junior welterweight earlier this year but relinquished the belt plans; he plans to fight Errol Spence Jr. at 147 pounds next year.

The top players at junior welterweight: Regis Prograis, Josh Taylor and Jose Ramirez, talented fighters who are largely untested at the highest level. Prograis, Taylor and the rest of the best are competing in Season 2 of the World Boxing Super Series, which kicks off in the fall.

Ramirez is set to defend his title against Antonio Orozco on September 14, and he looms as a potential future for Linares. Garcia is another viable option, even if the matchup lost a lot of luster after Linares’ setback to Lomachenko.

But first, Linares needs to impress against Cotto and prove he can fight at an elite level as he once again climbs in weight. The nephew of future hall of famer Miguel Cotto appears to be the perfect foil to make Linares look good.

Cotto (23-3, 12 KOs) endured a 19-month stretch from 2013 to 2014 where he dropped three defeats in five fights (two by knockout). The Puerto Rican has since reeled off five consecutive victories, all against weak opposition, and now he prepares for the toughest opponent of his career.

“I’m immensely grateful to my team and my promoters for bringing my career back to the highest,” said Cotto, 31. “This is a sport where I have fallen, but with the support of my family, my people and the commitment of my team, I have returned with much more desire to achieve the goal I have always dreamed of since I was 10 years old, which is to challenge for a world title.”

Barring a massive upset, it’s Linares who will once again vie for a title. He’s been written off more than once, and he’s looking to reinvent himself once again.