Isaac Dogboe – The rise and rise of ‘Royal Storm’ 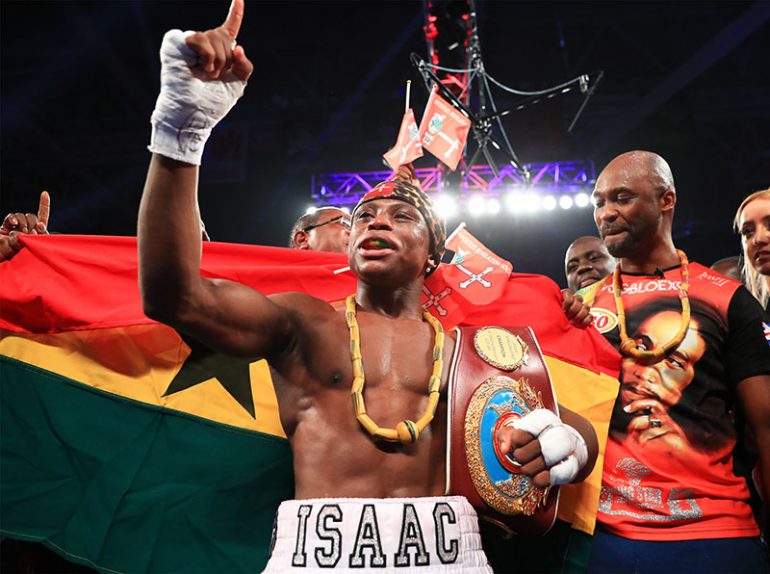 Last year none of you knew who Isaac Dogboe was.

But this kid from Ghana, who lived in London, wasn’t on radar screens.

That changed, and like 10 of you figured out that he was one to watch when he beat Cesar Juarez to claim an interim WBO junior featherweight belt in January 2018. But then Dogboe really upped his profile when he went at it with the unbeaten Jessie Magdaleno before their April 2018 tango, slinging toxic verbal mud at the WBO titleholder before knocking him out in 11 rounds.

Now the bandwagon is pretty damn full, after Dogboe took out Japanese vet Hidenori Otake in violent fashion on Saturday night. A leaping lead left hook wowed the crowd, and his finishing instinct sent notice that he wants to give fans good bang for the buck. Even veteran fight writers, accustomed to concussive displays, were highly impressed. Randy Gordon Tweeted that this kid looks like a pound-for-pound level talent.

Violent KOs will do that; they conjure buzz and optimism about a pugilist in such an efficient way. Legendary trainer-analyst Manny Steward so got it. He knew that winning by KO was a stellar short cut to greater prominence and pay-grade improvement. I am happy to take his ball and try to advance it, so young fighters wrap their brains around the undeniable fact – Hey, yo, it’s all about the kayo!

I’m still fixating a bit on this Dogboe, who has two fights left with Top Rank after they received options to co-promote him, with Isaac’s dad, Paul, when he beat Magdaleno.

He came on the Everlast “Talkbox” podcast to take a victory lap and shared that he wants to fight twice more this year. “I was ready to fight a week after my win,” which came in Arizona, and on ESPN, Dogboe (pronounced “DOG-BAY,”) told us.

The fighter, several times, gave credit to God for his success and told us that God’s hand helped guide his hooks that rattled Otake’s brain pan. As far as his own steering of fate, and what more he’d like to accomplish at 122 pounds, the fighter said he wants to unify the belts. That means WBC titleholder Rey Vargas, WBA champ Daniel Roman and newly crowned IBF belt holder TJ Doheny are on notice. I also noticed that Diego De La Hoya is ranked No. 1 by the WBO. That sounds like a match that Dogboe might like, being that De La Hoya has that all important name-recognition.

“Better to ask if HE wants to fight me,” said the London resident.

So, I reached out to Golden Boy Promotions’ President Eric Gomez. What about it, Eric? Would Diego like to take on the Ghana native? “I’m sure he would,” Gomez told me. “He will have a tune-up in October. Maybe after.”

And how about 126? That division is pretty darned stacked. Hey, fight fans, talk to me. You wanting Dogboe to maybe not move forth on the unification plan, and inject himself into the mix with names like Gary Russell Jr., Leo Santa Cruz, Oscar Valdez and Carl Frampton? Dogboe told us that he likes to hear those names in conjunction with his, with the exception of Frampton. He’s too fond of the Irishman, and so no amount of money would change his mind on that. No Dogboe vs. Frampton fight is in the cards, not now or ever.