Isaac Dogboe was barely hit by Otake, may fight again in December – adviser 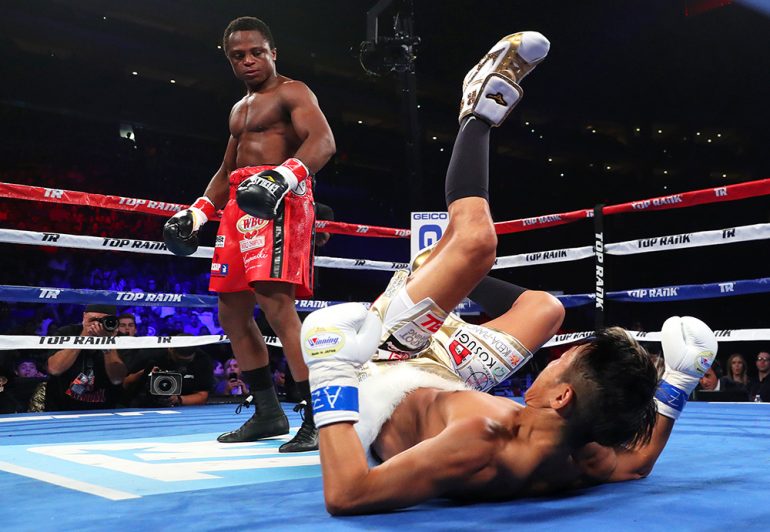 Isaac Dogboe came to the ring last Saturday shouting “Neho!”, an exhortation in the Ewe language of his native Ghana which means to uproot. It only took him 138 seconds to finish his gardening as he ripped Hidenori Otake out of the ground like a gardener getting rid of weeds.

It was just the way his handlers would have wanted him to handle his first defense of the WBO junior featherweight title on ESPN. If adviser Mike Altamura had his way, Dogboe would be back in the ring in six to seven weeks.

“To be fair, he didn’t take any punches on the weekend. I think Compubox said that seven punches were landed on him but I only remember seeing one shot land,” said the Australian dealmaker, as he opened up about when Dogboe could be back in the ring again.

“But it’s a business and you need to figure out things the right way and schedule them.”

Altamura says there’s a possibility Dogboe could be back in action on one of two cards planned by promoter Top Rank: the December 1 card in Los Angeles being eyed for the lightweight title unification match between Vasyl Lomachenko and Jose Pedraza, or December 8 in New York.

Dogboe had called for unification fights against WBA and WBC titleholders Daniel Roman and Rey Vargas, respectively. Roman already has a title defense scheduled for October against Gavin McDonnell in Chicago, making a quick turnaround for December a long shot. Vargas, who hasn’t fought since May, recently underwent surgery to repair an injured left hand. Altamura hopes Vargas will be available by then.

“Let’s start with the biggest fish to fry: Vargas. I would absolutely love that unification fight for December. If it’s not to be, then we’ll work our way down I suppose,” said Altamura.

Dogboe, 23, is already having a breakout year, having stepped in for the injured Jessie Magdaleno to stop mandatory challenger Cesar Juarez to win the interim belt, which he then parlayed into the full title with a stoppage of Magdaleno in April before blasting out Otake.

Altamura says Dogboe intends to fight four times in 2019 as well, even though he’s set to begin studies at Penn State University in January.

“It shouldn’t affect his fight schedule too much,” said Altamura.