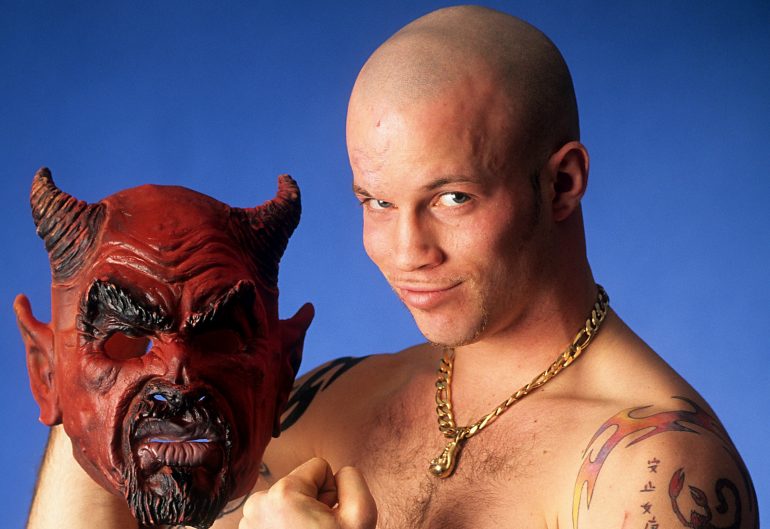 From the late-1990s to early-2000s, Angel Manfredy was a fixture on U.S. television; a must-watch fighter with a larger than life personality that endeared him to boxing fans. However, despite his obvious talent and insatiable desire, he always seemed destined to fall short of a world title victory.

Manfredy was born in Gary, Indiana, home of former middleweight champion Tony Zale, in October 1974. His father worked at a steel company, while his mother stayed at home and brought up four children.

Gary was a tough place to grow up and was once known as “The Murder Capital of America”. Manfredy was always fighting, on the streets or in school. After one particular scuffle, his father decided to take him to Hammond Boxing Club in East Chicago.

“I sparred a guy who was a lot bigger,” Manfredy told The Ring of his first experience of boxing at nine years old. “I got dropped three times, but I kept on fighting. That’s where I found my love.”

Manfredy wasn’t a prolific amateur and went 48-8 in the unpaid ranks. However, he always dreamed of fighting professionally and made his debut at the age of 18 in June 1993. His dream quickly turned into a nightmare when he was stopped in two rounds.

“I lost my debut because the day before I was out drinking,” Manfredy explained. “I was out partying with my friends. I thought nothing could touch me. I thought I couldn’t be beat and I went into that fight and got stopped by a more experienced fighter. After that fight I cried.”

Manfredy won his next fight but on Nov. 15 of that year his hell-raising lifestyle threatened to curtail not just his career but his life.

“I was out drinking and doing cocaine at a party and my now-wife is paging me – she wanted me to get home,” Manfredy admitted. “I had to leave this girl and go home to my wife.

“I left and I’m driving down Indianapolis Boulevard by myself. It was raining so hard, you couldn’t even see the road. All I remember was waking up and I was in hospital. I went straight into a telephone pole. They had to (break open the car) to get me out. When I woke up, the first words that came out of my mouth were, ‘Will I be able to fight again?’ The doctor said, ‘You’ll never regain your fitness, you’re done.’ In my mind, I said, ‘We’ll see about that.'”

Manfredy had 265 stitches in his forehead but, incredibly, there were no broken bones. And despite his indulgence the previous night, he came up negative for alcohol and drugs. The ex-fighter firmly believes it was God’s will that he survived. 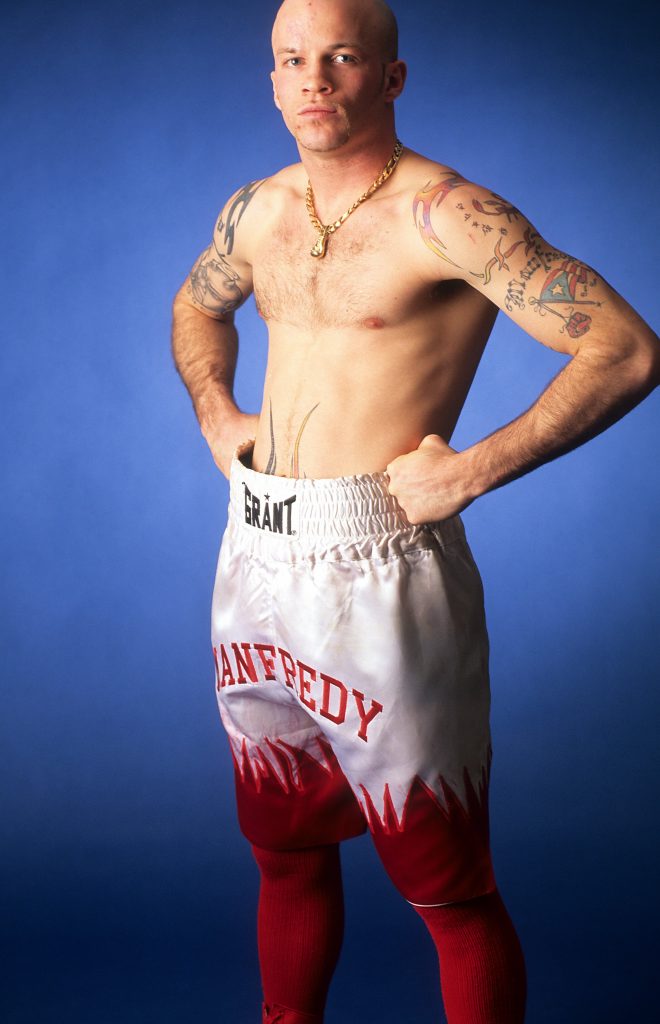 Photo by The Ring Archive

Amazingly, Manfredy was back in the ring just six months later and although he dropped a decision, it was a starting point. From there, the Gary native went on a 23-fight win streak over the next four-and-a-half years and progressed up the rankings.

During this time “El Diablo” fought in Canada, South Africa and Austria. Back in the U.S, he was beating the likes of former world champions Calvin Grove and Jorge Paez. Those wins helped earn Manfredy a January 1998 fight on HBO with the super-exciting Arturo Gatti up at lightweight.

“I called out Gatti after I knocked out Paez,” said Manfredy, who came in as a 3-1 underdog. “He gave me the opportunity, but everything was his way: location, weight, no belt on the line.

Two more wins helped procure Manfredy his next big assignment; a junior lightweight showdown against WBC titleholder Floyd Mayweather Jr. in the fall of 1998. It would be Mayweather’s first defense of a world title.

“It was a good fight. HBO said Mayweather won the first round, but I doubt he won the first round. The second round, he caught me with a shot and surprised me. The first thing that came into my mind was defense. He kept on swinging – missing a lot – and they stopped the fight. I cussed out the referee. I told Mayweather to give me a rematch. He said he would, but he never did.”

Manfredy returned to lightweight and won three bouts, including an impressive 10-round unanimous decision over Ivan Robinson. He believes his best performance was either Gatti or the Robinson victory.

When he was unable to get the Mayweather rematch, Manfredy elected to move up and challenge WBC 135-pound belt holder Stevie Johnston.

“I messed up and did cocaine a month before the fight, for a day or two, and went back to training camp,” Manfredy explained. “I lost a close decision, but I lost that fight.”

Over the next three days, Manfredy and his wife turned to drugs – big time. Although it all came close to ending tragedy on the third day, ultimately, the experience helped mould the couple into better people.

“We did cocaine for three days – no water, food, sleep – just cocaine,” recalled Manfredy. “I’m in the bedroom and she’s downstairs. I’m on my knees, and I remember a voice saying, ‘It’s time.’ In my mind, I’m like, ‘Time for what?’ ‘Time to take your life.’

“So, I’m contemplating taking my life. I had a (Colt) .45 in the closet, then I hear another voice say, ‘Are you going to give your life to me, or are you going to take your life? Choose.’ I had to make a decision. Seconds before I had to make a decision, my wife came running through the door. She heard a gunshot. I didn’t even have a gun in my hand, but I gave my life to the Lord.

“I told her we’re going to serve the Lord and then I came out with ‘Got Jesus’ on my trunks. I’ve tried to relay ‘Got Jesus’ to the world. Do you have him? I got him.”

Manfredy returned and won five fights in a short period of time to get a third title opportunity, this time against Diego Corrales. It took place back at junior lightweight. 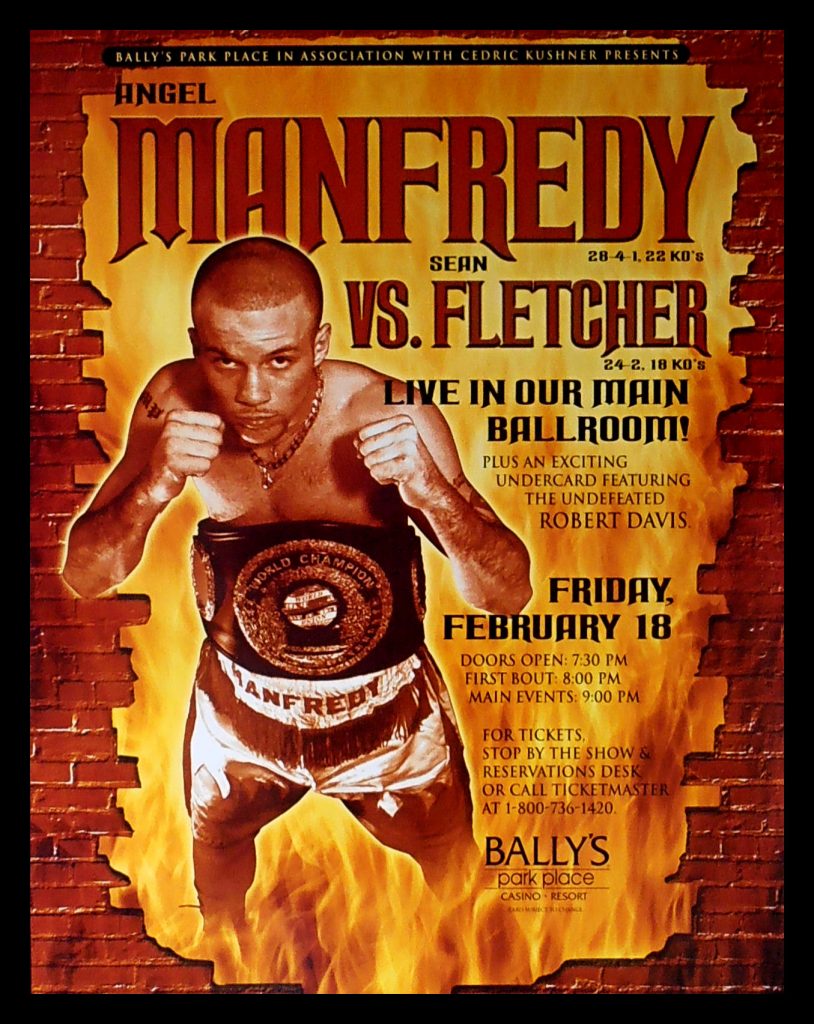 “As you saw in the fight, I couldn’t make the weight (correctly). (Corrales) was big, 6-feet tall, young and he made weight. Making weight hurt me. One thing they said in that fight, ‘Manfredy, he’s a fighter, he doesn’t stop fighting.’ Every time I got knocked down I got back up. I wouldn’t give up but, finally, the referee stopped the fight (in the third round).”

Despite that setback, Manfredy wasn’t finished and made a final title run. In a terrific victory, he stunned the then-unbeaten Julio Diaz in an IBF lightweight title eliminator in 2001 to earn himself a shot at the talented Paul Spadafora.

“After the weigh in, you’re supposed to sign the gloves, but they gave me the gloves 30 minutes before the fight,” said Manfredy. “The gloves didn’t fit my hands. It was terrible.

“I couldn’t hit him hard because I couldn’t make a fist in my glove. That was a frustrating fight. They rigged it up for Spadafora in his hometown; that’s why he got the victory. If I’d had my Reyes gloves, he wouldn’t have won that fight.”

Manfredy stayed active for another two years before bowing out of the professional game in 2004 with a record of 43-8-1, 32 knockouts.

“I’m not supposed to be here,” said the God-fearing, born-again Christian. “I’ve been in 10 car accidents. I’m scarred for life. I’ve had drugs, woman, fame, you name it. I did it all. The devil couldn’t kill me. I could not die, and I’m born again. I’m very, very thankful. I live a very humble life. I’m just happy. God’s changed my life for the good.”

The 43-year-old Manfredy is married to Yvette. The couple have been together since school and live in Crown Point, Indiana, with their three children. The former fighter tried construction work in retirement, but he is now a boxing trainer.

The former four-time world title challenger graciously took time to speak to The Ring about the best he faced in 10 key categories.

BEST JAB
Arturo Gatti: I’d say it was between Corrales, Gatti and Mayweather. I was at my best when I fought Arturo Gatti. Corrales was tall, lanky, good reach, he had a good jab. Gatti did too, his jab was stronger. I’d probably go Gatti.

BEST DEFENSE
Floyd Mayweather Jr.: That would probably between Floyd Mayweather and Steve Johnston, but I pick Floyd. He was a runner when I fought him. He ran and then caught me with that right hand which surprised me. He attacked me and threw 15 punches, landed three, and they stopped the fight. I was like, ‘What!?’ I’m cussing the referee out and arguing with Mayweather. He’s a boxer that had awesome, superb defense. He wasn’t using the shoulder roll when he fought me, that came after. He moved his head, he moved his body, he was just hard to hit because he was very fast.

FASTEST HANDS
Mayweather: That would be Mayweather. Handspeed is a gift. His speed alone stood out. His handspeed was a gift from God. I was fast, but I wasn’t that fast.

BEST FOOTWORK
Mayweather: That would be Mayweather again. Remember he was a boxer, a mover.

BEST CHIN
Gatti: Oh, that was Arturo Gatti. You saw the knockdown in the third round, he should have been out but got back up and weathered the storm. A true champion. Hall of Famer. All the way – Gatti.

SMARTEST
Stevie Johnston: “Lil’ But Bad” Steve Johnston. Very intelligent, smart fighter. He fought very well when he fought me. Mayweather wouldn’t fight him. When I fought Steve Johnston, he was the best lightweight in the world.

STRONGEST
Gatti: It’s between Gatti and Corrales. I really can’t say between the two. When I’m at my best, I say Gatti. When I’m weakest, Corrales. Gatti, I guess, because I was at my best.

BEST PUNCHER
Gatti: That was between Gatti and Corrales. I couldn’t make 130 and Corrales was a lot bigger. He was 6-feet tall at 130 pounds. He was a freak. When he caught me with the left hook in the first or second round, I hit the floor real fast. It was more surprising. Gatti was more ‘Wow’, you know you’re rocked. I was in my prime against Gatti. I could take more at that point than later in my career, so I’ve got to give it to Gatti.