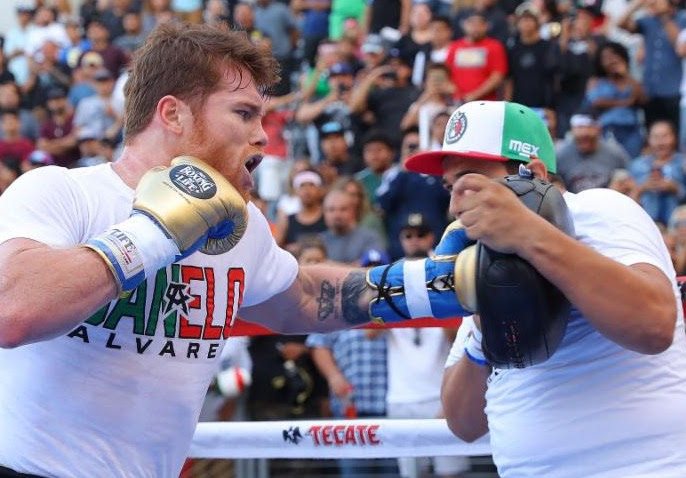 When Canelo Alvarez and Gennady Golovkin met in the ring face to face for the first time in a public setting, the proceedings were cordial.

As they prepare for the rematch, the climate is decidedly frosty.

Golovkin (38-0-1, 34 knockouts) owns a bitter taste in his mouth; after all, he lost out on a $25 million-plus payday when Canelo tested positive for performance-enhancing substances in February, scuttling their planned May return encounter.

Alvarez, too, feels disrespected. The normally reserved GGG and his outspoken trainer, Abel Sanchez, have publicly lambasted the Mexican star in the lead-up to their next fight. They’ve called Canelo a cheater; entitled. Golovin even accused Alvarez of doping ahead of the first fight.

With a little less than three weeks to go until fight night in Las Vegas, two fighters who usually avoid trash talk are embracing a war of words.

“Canelo, he is not a champion. He is a liar who has no respect for the sport of boxing or its fans,” Golovkin said Sunday at a joint media workout at Banc of California Stadium in Downtown Los Angeles. “I want to stay world champion and bring all my belts home. I am ready to star in another ‘big drama show.’ I do not think about Canelo in training. I am not worried about him.

Even if GGG no longer respects the man he once sparred, the middleweight champion realizes what he’s up against. Alvarez’s movement gave the 36-year-old Kazakh fits at times, and Golovkin bemoaned Canelo’s propensity to employ a counter-punching strategy rather than the pressure style he enjoys.

The fight resulted in a draw, and that’s another reason there’s so much bad blood between the pair. The majority of fans and media believed GGG deserved the nod; to that end, he’s repeatedly cried robbery and painted Canelo as the A-side who received favor from the Nevada commission and its judges.

The 27-year-old from Guadalajara vows to assert himself more the second time around in search of the knockout that would place all the controversy — stemming from the positive drug test to the scorecards — to rest.

“My objective is the knockout and I’ll be looking for that from the opening round. Golovkin knows who I am. He knows who I’m about. Let me put it even better — he still doesn’t know how much more I have left to show. I’m looking forward to showing him that on September 15. I have to win convincingly. It has to be a knockout to erase any doubts.”

The heated lead-up is another present to the sport. The first promotion was devoid of any drama as they exchanged pleasantries. That’s all out the window now.

And if they can match their banter with their fists, the rematch will be even more violent than the action-packed first bout that failed to produce a clear victor.

“This fight is personal because of all that’s been said, and it will be difficult to regain the respect that we once had,” Alvarez said. “The statements that have been made about me have given me more motivation to train harder. I have watched the first fight several times. The error that I made was that I had opportunities to counter that I needed to have taken advantage of. I need to do that in the rematch.”

Will Alvarez and Golovkin embrace after the bout and perhaps even put all the vitriol behind them? That’s usually the case in boxing, but they weren’t making any guarantees.

“Why not? If he comes back to real life, absolutely. If he stays a fake, it’s impossible … Maybe couple years we go to big boxing convention together. Why not? Nobody knows.

“If you’re fake, of course you support Canelo. If you’re real guy, you support me. It’s like white and black — that’s it.”

If GGG left the door ever so slightly open, Canelo closed it shut. He appears to be the angrier of the two; he’s the one who’s been dragged through the mud the most.

He called Sanchez a “dumbass” recently and maintains his innocence in the face of the doping charges.

“For me it’s very difficult personally, especially for all the things that’s been said,” Alvarez said, “all of the offensive claims that’s been made about me.”

They’ll settle their differences in the ring, and this time, they might even decide middleweight supremacy, too. And who knows? Maybe they’ll even shake hands and embrace each other’s corner when it’s all said and done. But don’t bet on it.