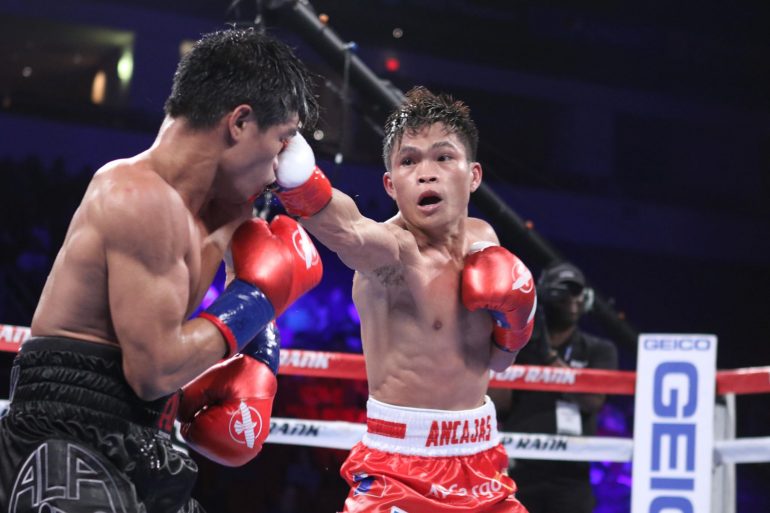 Jerwin Ancajas will take his talents to the Bay Area for his sixth defense of the IBF junior bantamweight title when he faces Mexico’s Alejandro Santiago on Friday, September 28 at the Oracle Arena in Oakland, California.

It’ll be the third straight outing in the United States for the 26-year-old southpaw Ancajas (30-1-1, 20 knockouts) from Panabo City, Philippines, and will put him in the heart of one of the country’s biggest Filipino-American communities as he continues to build his following abroad.

In Santiago (16-2-4, 7 KOs), Ancajas is hoping for a better style clash than his last bout, a unanimous decision over compatriot Jonas Sultan this past May in Fresno. Santiago, 22, of Tijuana has been held to draws in the three times he has fought outside his native country, though those stalemates have come against unbeaten fighters Antonio Nieves and Jose Martinez.

“I am very excited to defend my title in Oakland in front of the great fans there, and I look forward to a great challenge from Santiago,” said Ancajas, whose fight will be the co-main event of the ESPN+ broadcast, in a press release from promoter Top Rank. “There is a large Filipino community in Northern California, so I expect an incredible atmosphere inside the Oracle Arena. I also want to thank MP Promotions, Sean Gibbons, Top Rank, and Mr. Bob Arum for this opportunity.”

The main event will feature aggressive banger Jose Uzcategui (27-2, 23 KOs) in a 10-round non-title bout against Argentina’s Ezequiel Osvaldo Maderna. Uzcategui, originally of Venezuela but now fighting out of Mexico, was recently upgraded from interim IBF super middleweight titleholder to full champion status after James DeGale vacated, and was last in the ring this past March settling old business with Andre Dirrell by eighth round technical knockout.

“This is my first fight since winning the world title, and I will be representing my country and my beloved Tijuana, Mexico, with pride and guts,” Uzcategui is quoted. “I will show the world and my opponent why I’m the best super middleweight in the world right now!”

Also competing on the broadcast is returning former WBO junior featherweight titleholder Jessie Magdaleno (25-1, 18 KOs) against another ex-champ in Rico Ramos (29-5, 14 KOs). Magdaleno is fighting for the first time since losing his belt to Isaac Dogboe this past April, while Ramos has regained his stride of late, winning his last five bouts.

“I want to be a world champion again. I have that fire and that fuel, and I am ready to do whatever it takes to get back there,” said Madgaleno, who has switched trainers to Ismael Salas and Jorge Capetillo after feeling he wasn’t as mobile as he’d have liked to be against Dogboe.