Bob Arum on the passing of “The Boxing Senator” John McCain: “He was a great American” 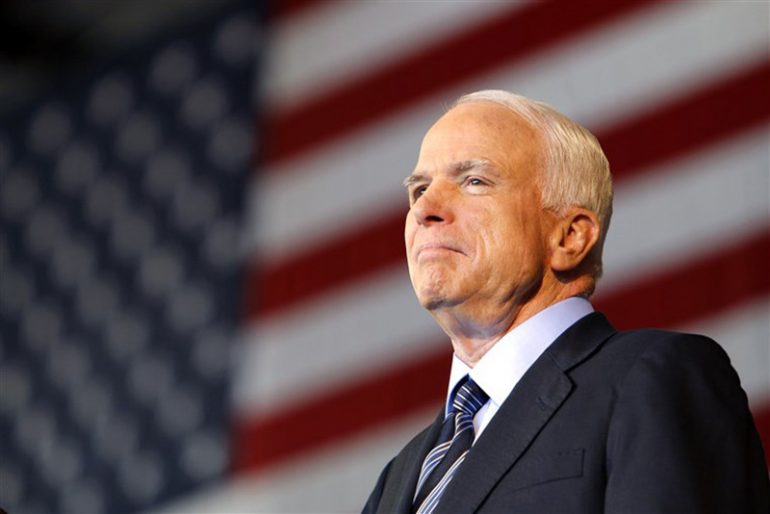 GLENDALE, Arizona – The bell echoed mournfully, 10 times, through an arena that was a stage for a soldier and statesman who boxed at the Naval Academy, wrote the Muhammad Ali Act and fought for Jack Johnson’s pardon.

Arum remembered McCain as a fan who regularly bought ringside seats. He also remembers him as a passionate fan, who would defend his opinions about fights and fighters with the same tenacity that he would use to battle opponents on the Senate floor and in the White House. 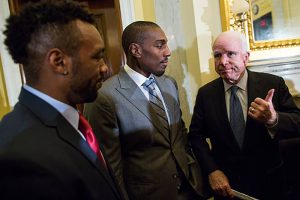 “He was a great American,” Arum said within hours after it was announced that McCain, 81, had died Saturday afternoon. “I didn’t agree with him a lot. He was too conservative for me. But you respected him because he believed in those things and he was the only guy who would go across the aisle and make deals with Democrats.’’

For boxing, one of the most important deals was the Ali Act, which introduced financial and safety regulations to the game. It was passed in 1996. It was updated in 1997.

“I thought the Ali Act was terrific,’’ Arum said. “The problem is boxing changes.’’

Arum said the business is still troubled by conflicts of interest, including promoters often acting as managers of the fighters they promote.

“The Act didn’t deal with that because it wasn’t apparent at the time,” Arum said. “It needs to be modernized.”

However, Arum said, McCain’s legislation has had long-term benefits on safety and increased financial transparency.

“Very definitely,” the Top Rank president said. “It was very pro-boxers. One thing is boxers never knew financially what was involved in a fight. The disclosure required by the Muhammad Ali Act at least levels the playing field a little bit. We weren’t obligated to tell a fighter what we’re getting from a network and now we are.

“A fighter getting $50,000 from a main event might not have known the promoter was getting $1 million from the network.” 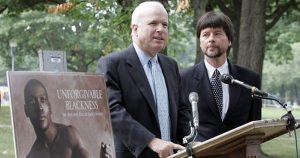 For years John McCain, seen here with documentarian Ken Burns at a 2004 news conference, fought to get a presidential pardon for former heavyweight champion Jack Johnson.

McCain also led the long political fight for Jack Johnson, the fabled heavyweight who about a century ago was convicted on felony charges for transporting a white woman across state lines.

McCain, Arum said, “was important in everything in boxing – Jack Johnson, the Ali Act. He was the boxing senator along with (former Nevada Senator) Harry Reid.

“Trump used boxing when he ran casinos and screwed a lot of people. But how can you even compare Trump to a man like John McCain? That’s comparing a criminal to a guy who was a real American hero.”

Arum says that Trump still owes him $2.5 million for his promotion of the Evander Holyfield-George Foreman fight in 1991 at the Atlantic City Convention Center. Trump’s Atlantic City casino sponsored that heavyweight fight.

Arum said he often disagreed with McCain about politics and boxing. He recalls Oscar De La Hoya’s controversial decision over in 1991 over Pernell Whitaker in Las Vegas.

“I remember him screaming at me ringside after Whitaker-De La Hoya, saying, ‘What a robbery! Whitaker won the fight!’ I shouted back at him.

McCain’s passion for boxing even led to a speech on the Senate floor. He took on the judges after they scored in favor of Timothy Bradley over Manny Pacquiao in 2012.

“Well, he wasn’t always right,” said Arum, smiling almost as if could hear McCain all over again.