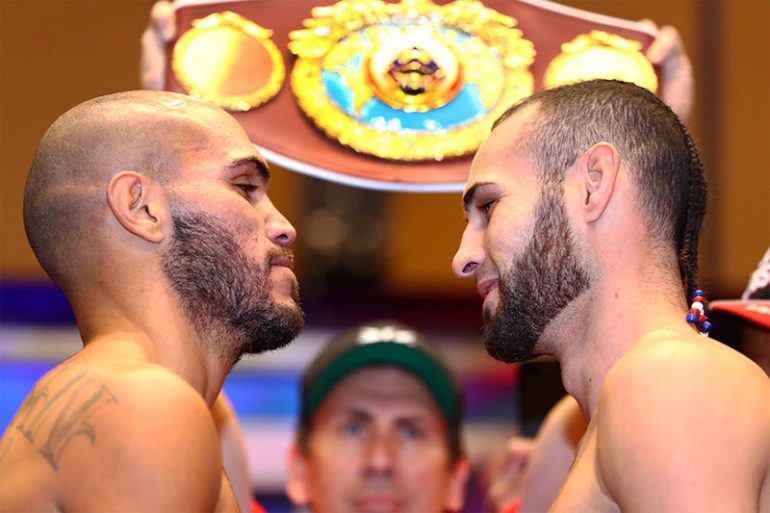 No one’s going to mistake either of the participants in Saturday’s ESPN main event for an elite fighter.

Ray Beltran is a hard-nosed, rough customer who likes to grind out his opponents and can throw a pretty nice left hook, too. At 37, he finally won a world title in February, and will enter the ring with a belt around his waist for the first time when he meets Jose Pedraza.

The Puerto Rican is a former titleholder himself, and following an accomplished amatuer career, there was plenty of buzz surrounding him. He struggled to outpoint a middling fighter like Edner Cherry and then was knocked out by Gervonta Davis after just one title defense.

Pedraza, it turns out, is a solid fighter but won’t be appearing on pound-for-pound lists anytime soon.

The winner of Saturday’s lightweight title fight in Glendale, Arizona, won’t just hold a lightweight title, though. He’ll also earn the right to face someone who is widely regarded as the very best pound-for-pound fighter in the world.

Vasiliy Lomachenko, The Ring’s champion at 135 pounds, is recovering from surgery to repair a torn rotator cuff, but he’ll be ready to fight on December 1 at The Forum in Inglewood, California. His opponent will be either Beltran or Pedraza, provided the winner doesn’t suffer any serious injuries.

And while neither Pedraza or Beltran will be given very little chance to so much as trouble Lomachenko, such a matchup will likely represent a career-high payday for each fighter and the biggest stage of their careers.

“Now I have the belt and people see me as a champion,” said Beltran, who was Manny Pacquiao’s chief sparring partner for many of his signature bouts. “But before that, I already felt like a champion. It’s good to get recognition from the boxing world, but like I said before, I don’t feel different. Things have changed around me, but I’m still the same guy. I’m a contender.

“I’m the underdog. Once you get the world title, there are new challenges. You’re always looking for the best challenges out there, and now I have a very important fight against a very difficult and tough opponent. In my mind, I don’t get overconfident. I get confident, but not overconfident.”

Beltran, The Ring’s No. 3 lightweight, has no reason to be overconfident following his last performance. He barely eked by Paulus Moses in a grueling affair and now he’ll take on a style that figures to present a more difficult assignment.

At his best, Pedraza, 29, can stick and move. He’s quick on his feet and possesses solid boxing fundamentals. But he’s easily drawn into a brawl, and that’s exactly what Beltran wants. Pedraza brawled with Mexico’s Antonio Moran in June and came away with a razor-thin decision.

The victory put him in position for another title shot, but he didn’t think it would come quiet this quickly. Beltran (35-7-1, 21 knockouts) was slated to make a mandatory defense against WBO No. 1 contender Roman Andreev this weekend, but the Russian was unavailable after he underwent appendix surgery.

“It would mean a lot to me because not everyone gets the opportunity to become a world champion,” said Pedraza, The Ring’s No. 10 lightweight. “Even fewer boxers become two-division world champions. I am going to take full advantage of this opportunity.”

Pedraza continued: “A pressure fighter is a perfect style for me because I am more of a boxer. The pressure Beltran puts on a fighter is different because he knows how to cut the ring off very well. He’s going to be tough, but I know we’re going to be victorious.”

If Pedraza (24-1, 12 KOs) is going to reclaim a lightweight title, he’ll also have to contend with a hostile environment. The fight is a homecoming for Beltran, a Mexico native who hails from nearby Phoenix.

He waited a long time to place a belt around his waist, and it figures to be another vicious bout to keep it.

“I think fighting Jose Pedraza and defending my world title near my hometown of Phoenix, Arizona, is a dream come true,” said Beltran. “Defending my title against a Puerto Rican, with the rivalry between Mexico and Puerto Rico, there’s nothing better than that.”

Lomachenko will be watching with vested interest.