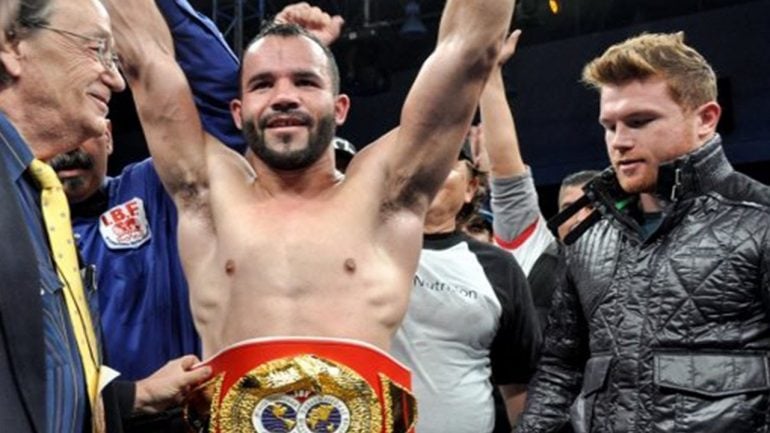 Ramon Alvarez with younger brother Canelo to his left.
24
Aug
by Francisco Salazar

Canelo Alvarez has seen received plenty of press leading up to his Sept. 15 rematch with Gennady Golovkin. However, this Saturday night, older brother Ramon will be the one garnering all the attention in the Alvarez family.

Ramon Alvarez will face Nicolas Luques Palacios in a 10-round junior middleweight bout at the Domo Sindicato de Trabajadores IMSS in Mexico City. The fight will air on Azteca TV throughout Mexico and on beIN Sports en Espanol in the United States (11 p.m. ET/ 8 p.m. PT).

Alvarez (26-6-3, 16 knockouts) last fought on Apr. 21 in his hometown of Guadalajara, Jalisco, Mexico, outboxing Jorge Paez Jr. to win a 10-round unanimous decision.

The 32-year-old Alvarez is unbeaten in his last three fights since suffering a knockout loss to Omar Chavez on Apr. 29 of last year.

Despite living in the shadow of younger brother, Alvarez also has a notable victory over Omar Chavez (in their first fight) and former world titleholder Vivian Harris in 2014. Alvarez has also collected a handful of regional title belts throughout his career.

Luques Palacios (10-4-1, 1 KO), who resides in Cordoba, Argentina, will take a significant step up in opposition. In his last bout on June 2, Luques Palacios outboxed Alexis Veronesi over eight rounds to win by unanimous decision.

He has won his last three fights.

In the co-feature, featherweight Sergio Sanchez (9-0, 4 KOs) will square off against Mauricio Lara (10-2, 5 KOs) in an eight-round bout.