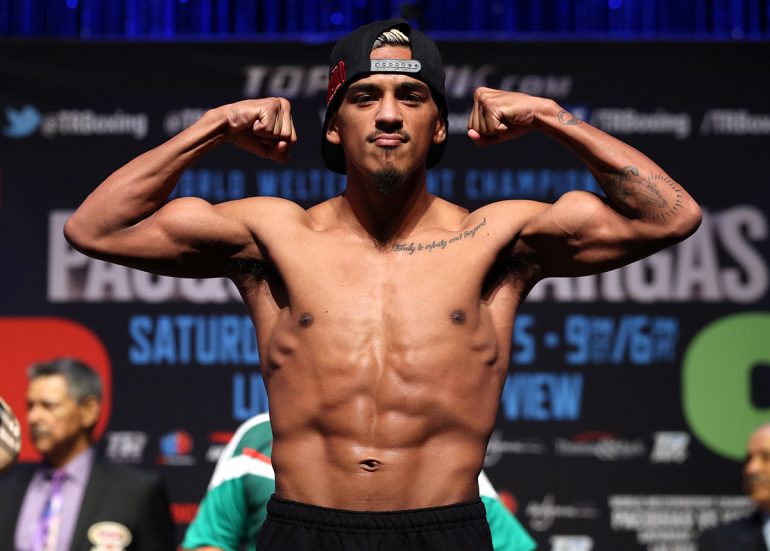 Junior featherweight contender Jessie Magdaleno is aiming to win back the WBO title he lost to Isaac Dogboe on Apr. 28 but must prevail in his upcoming fight.

Magdaleno, who was stopped in 11 rounds, is penciled in for a return to the ring on Sept. 29, manager Frank Espinoza told The Ring Tuesday night.

The talented southpaw, who resides in Las Vegas and is now trained by Ismael Salas, recently signed a new promotional contract with Top Rank.

“We started his career with Top Rank,” Espinoza said. “After the loss (to Dogboe), Top Rank and I negotiated a new deal with Jessie. We negotiated numbers. We both see his ability and that he has what it takes to be a world champ again.”

A name that has come up as a possible opponent is former world titleholder Rico Ramos.

“I accepted Ramos as an opponent for Jessie,” said Espinoza. “We would entertain that fight.”

Magdaleno is currently ranked No. 7 by the WBO. Dogboe has a fight lined up this Saturday against Japan’s Hidenori Otake in a voluntary defense.

Espinoza accepts that a Dogboe rematch might not happen until 2019. He is open to Magdaleno (25-1, 18 knockouts) fighting again in December or early next year to solidify his position as mandatory challenger.

Regardless, a fight against Dogboe is the paramount objective.

“We can come back with one or two fights,” Espinoza confirmed. “I know it’s something Top Rank is interested in. We’re hoping for that rematch with Dogboe.”