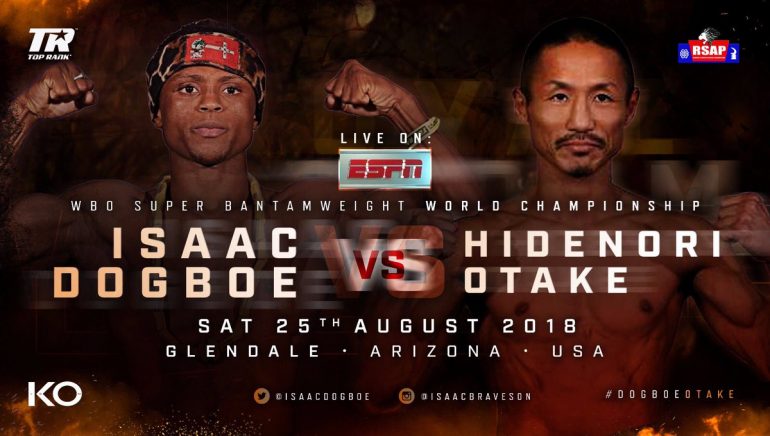 The switch went off in Isaac Dogboe’s mind, months before stepping into the ring Saturday night. As he’s bouncing on his toes, waiting for the opening bell, he’ll be announced as the defending WBO junior featherweight titlist. In his head, the tiny fist of muscle will hear something different.

It’s a self-imposed psychological ploy of selective amnesia. It’s been geared toward regaining the mindset of a challenger, of maintaining that hunger and desire that propelled him before. It’s why “Royal Storm” took a bit of a drastic measure. He didn’t need to see it anymore – out of sight, out of mind, he thought. That’s when he decided to hand it over to his 13-year-old brother Josiah who hung it up in his bedroom where Isaac couldn’t see it.

That’s where Dogboe’s world championship belt stayed, while the Dogboes were in London, England.

“I put the world championship belt there in Josiah’s room because he’s the next one coming up and I put it there to motivate him,” said Dogboe, who won the WBO 122-pound title with a stunning 11th-round knockout over Jesse Magdaleno in April. “I didn’t want to see the belt because I wanted to get back to thinking like a challenger again.”

Dogboe showed great resolve in getting up from a first round knockdown to hand Magdaleno his first defeat. In the subsequent four months, Dogboe’s been trying to put what happened behind him.

“I have to,” explained Dogboe, who’s originally from Ghana and now lives in London. “You get nowhere without being hungry. I have to get out there and search and destroy my opponent. I see myself as the challenger. Every time I step into the ring, I have to be the hunter. It’s why I say I have a challenger’s mentality. I have to have that extra hunger. Whoever they put in front of me in the ring, my goal is to take them out. 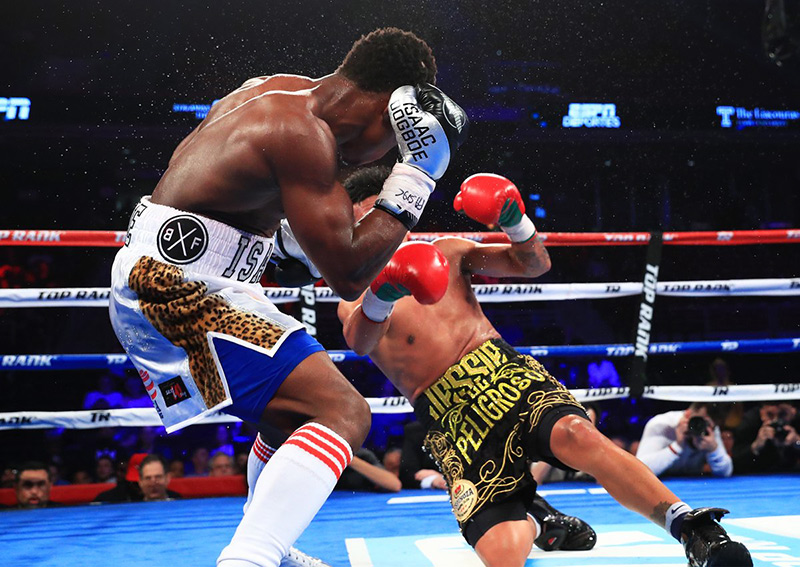 “It will be a knockout victory,” he says. “One thing that won’t happen this time is getting knocked down, which happened the last time (against Magdaleno). Besides that wasn’t a proper knockdown. I took about three weeks off after that fight and I was right back in the gym. I know Otake likes to come straight forward.

“I like to come straight forward. It makes for a really good fight. I do know that (Otake) is physically strong,” Dogboe continued. “He likes to take shots and he likes people who come to brawl, which makes it an exciting fight. TV loves these things. He wants to take the belt back with his family; I want to take the belt back with me. He is tall but he isn’t the first tall fighter I fought.”

“I was able to look right up (Lopez’s) nose, staring at his chin,” the very genial Dogboe said. “I have no problem fighting tall people.”

Paul Dogboe, Isaac’s father and trainer, has also had to get accustomed to something new since his son won a major title. Every once in a while, Paul will slip and call his son “Champ.”

Paul comes from a military background, which explains why he’s very demanding on his children. He’s a proud, caring father who will brag – deservedly so – to everyone about his children’s accomplishments. The only ones who may not hear the flattering words are his children. Paul has certainly done a great job with Isaac, who, after the Otake fight, will be staying in the United States, finishing his undergraduate degree in international affairs and politics at Penn State University.

“Isaac is very structured and very disciplined and easily someone any coach can work with. He’s great; he’s great and he listens, too,” Paul said. “You see, I honestly don’t know how to praise my kids. Isaac is living his dream very well. I don’t praise him to his face. He’s a 23-year-old world champion. I keep telling him, ‘Listen champ; you have to stay hungry.’

“Isaac tells me he feels like an underdog every time he fights. We’re going to fight Otake that way,” Paul added. “He knows Otake is standing in his way for a unification. We know Otake is also 37. He’s going to come like a kamikaze fighter. Otake is Japanese. They are a strong, proud, warrior people. Isaac’s head is screwed on right. He’ll know how to deal with it.

“This is the first time I’ve called Isaac ‘Champ.’ It’s all about not letting him get a big head. We’re not where we want to be yet. Isaac is one of the best young fighters in the world today. In the amateurs, they used to test Isaac all of the time because he is so strong. Otake will come and fight because he wants to bring that belt home with him. Isaac still doesn’t feel like he’s a champion yet. Otake is a warrior’s warrior who will go down. He will be there to be hit.”

Isaac did bring the belt with him and it will be there with him on Saturday night.

“It’s here,” Isaac said. “The belt is coming back home with me.”

No doubt for safekeeping in a place where he can’t see it.