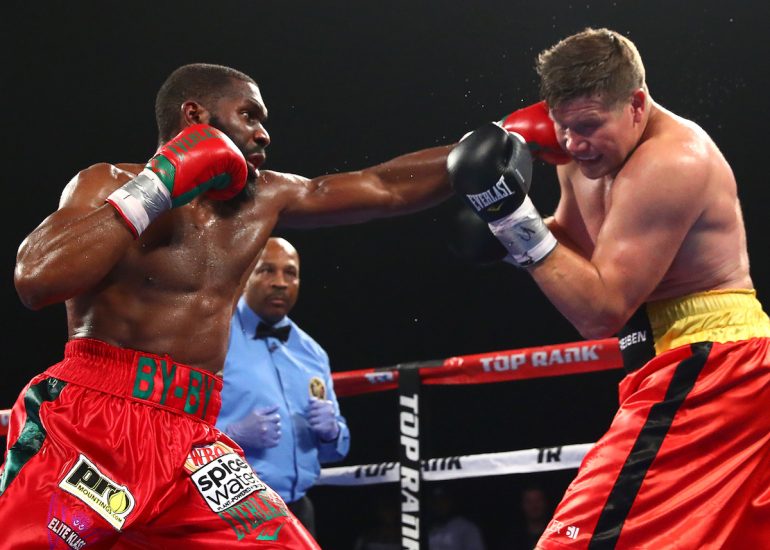 ATLANTIC CITY, N.J. — There has always been a surreal serenity to Bryant Jennings. The Philadelphia heavyweight contender hardly enters the arena for a big fight with a sinister sneer or the type of squinting eyes looking to kill. To the contrary, “By-By” would rather tap his foot to the rhythm of a rap song as he gets his hands taped and enter the ring with an even demeanor.

Saturday night was no different for Jennings, who headlined the debut “Top Rank on ESPN” card at the Ocean Resort Casino (formerly known as Revel) before 2,543 at Ovation Hall.

So a little early trouble wasn’t going to rattle Jennings, the undersized heavyweight from the hardscrabble badlands of North Philly. In Bryant’s world, it was ho-hum; he’ll adjust.

Jennings got up from a fourth-round knockdown to win by ninth-round TKO at 1:56, stopping the hulking 6-foot-7, 257-pound Russian Alexander “Sascha” Dimitrenko. It’s the first time in Jennings’ pro career that he got up from a knockdown and won.

Giving away 32 pounds and four inches in height, Jennings (24-2, 14 knockouts) won his fifth-straight fight after losing to Luis Ortiz in December 2015.

Dimitrenko (41-4, 26 KOs) knocked Jennings down in the fourth with a chopping right hand, and that seemed to put a greater sense of urgency into By-By. He came back in the fifth and sixth rounds, narrowing what could have potentially been a huge delta to cross if he had any hopes of winning.

In the seventh, Jennings bounced a left hook off of Dimitrenko’s head and Dimitrenko responded with a straight right that connected. Toward the end of the round, Jennings nailed Dimitrenko with a pair of left hooks and had the larger fighter backing up. 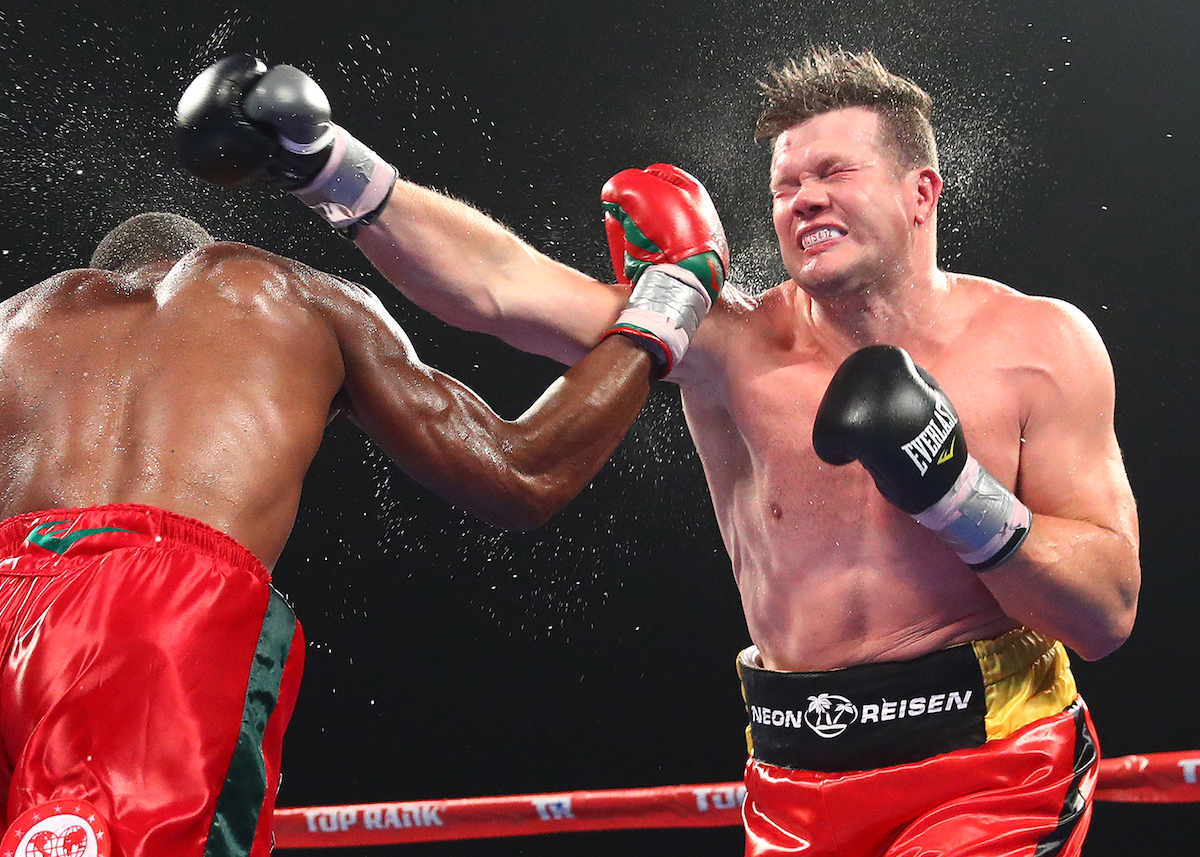 Dimitrenko seemed to be tiring in the eighth, and Jennings jumped on that chance. A Jennings left hook to the body and a shot to Dimitrenko’s temple dropped the Russian the first time, and a barrage of punches felled him a second time.

Dimitrenko was out on his feet by the time he entered the ninth.

A Jennings right uppercut ended it. Dimitrenko fell a third time and referee Allen Huggins stepped in and waved it over at 1:56 of the ninth, much to the dismay of Dimitrenko, who protested to Huggins and kicked the ropes in frustration.

“I knew this was going to be a tough fight; that’s a big dude,” Jennings said. “This was good. I was rocked in the fourth round. I kneeled there and thought, ‘This dude can’t hurt you, and he can’t do anything to you.’ That was about me keeping my composure at the worst point.

“In the fifth and sixth, I had to grab the momentum back before he thought he had it. I sensed him tiring and working. I didn’t get a chance to counter the way I wanted to. I think tonight I beat Ortiz. But nothing could ever be perfect.

“You can have the best training camp, the best fight plan, and then everything can go wrong. I did not watch one second of [Dimitrenko] whatsoever. That’s a part of adjusting, and learning, and getting through those type of fights. It was important that I finished the fourth like I didn’t get hit and had to stay on a knee for eight seconds. I got up and I was good.”

Philly native Jesse Hart (25-1, 21 KOs) was very impressive in winning by his third-straight stoppage after losing a title bid against WBO super middleweight champ Gilberto Ramirez last September. Hart stopped Mike Gavronski (24-2-1, 15 KOs) at :52 of the third round of a scheduled 10-round super middleweight bout.

In the first, Hart displayed his dominance early when he wobbled Gavronski with an overhand right. Gavronski returned to his corner with a red welt in the middle of his forehead. In the second, Hart landed a thunderous left hook that once again caught Gavronski’s attention. Gavronski did manage to fight back — after the bell, which angered Hart, causing a little more friction between the two fighters, before referee Eric Dali broke it up. 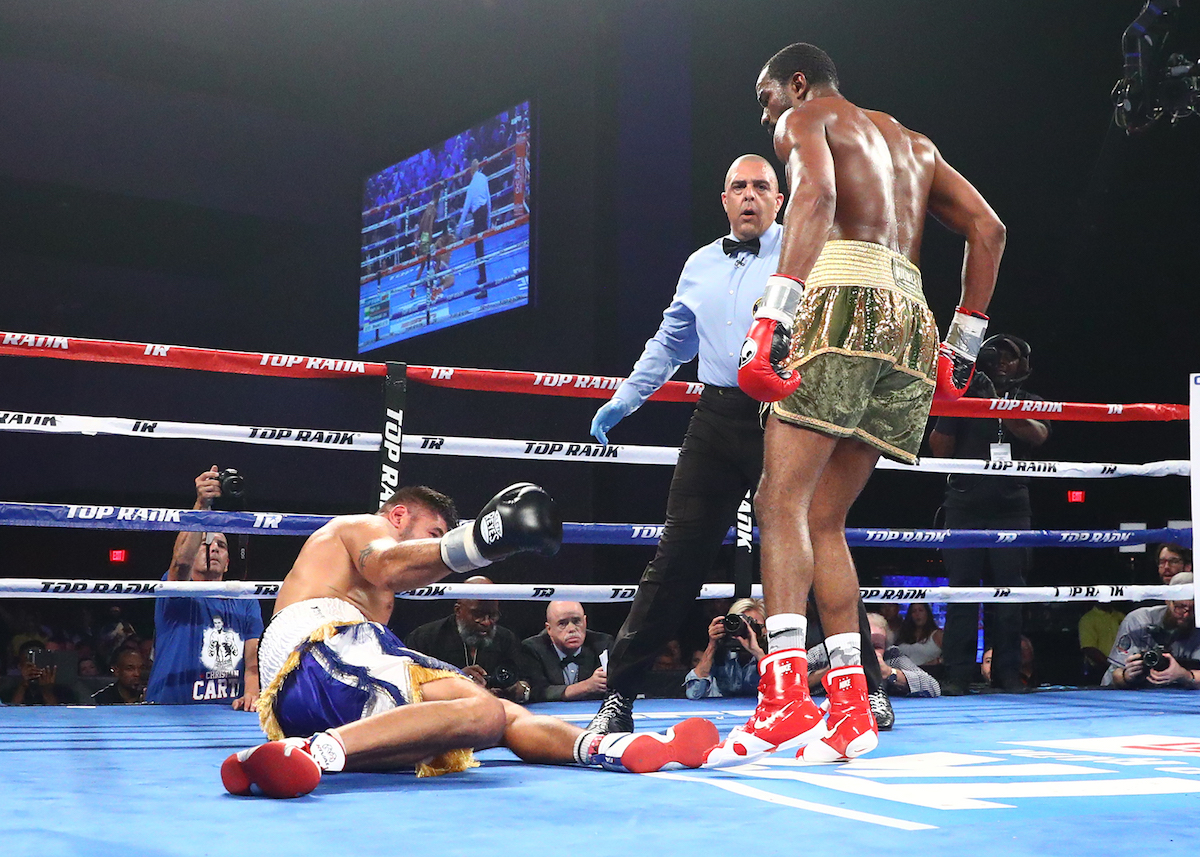 But it seemed a matter of time before Hart got to Gavronski — and he did. Hart scored a knockdown in the third with a short, chopping right hand to the temple over Gavronski’s lowered left hand. As Gavronski gamely tried to re-engage Hart, he fell for a second time from what Hart said was a blunt right uppercut. By then, Gavronski’s eyes seemed rolled back in his head and Dali stepped in and waved it over at :52 of the third.

“When [Gavronski] felt my power in that first round, I looked at his eyes and he got real scared,” Hart said. “He started holding and grabbing. A guy like that fights for survival. He doesn’t fight to win after that. You hurt a man, there is difference between fighting to win and fighting for survival.”

The Ramirez loss still leaves a bitter taste for Hart.

“Give me a chance to redeem myself. [Ramirez] keeps talking about how he’s going to move up and he don’t want to fight me,” Hart said. “He doesn’t want to rematch; he wants to unify. It’s hard for him to make the weight. Come on, man, stop with the excuses.

“I’m right here in front of [Ramirez]. I’ve had three-straight knockouts since that defeat. I’m not trying to get it on the politics. I’m fighting my way back. That’s the old-school about me. I’ll fight my way to the top. I don’t want anything given to me.”

On the undercard, Aleksandor Teslenko (14-0, 11 KOs) won a unanimous 8-round heavyweight decision over Avery Gibson (9-9-4, 3 KOs), and promising lightweight Joseph Adorno moved his consecutive stoppage streak to nine by pounding Agustine Mauras (6-5-3, 3 KOs) and finishing him at 1:39 of the first of a scheduled six-rounder.

Shakur Stevenson, the 2016 Olympic silver medalist, won but didn’t look good against Carlos Ruiz (16-5-2, 6 KOs) in an 8-round bantamweight fight. Ruiz gave Stevenson (8-0, 4 KOs) his toughest fight to date, though he won by shutout 80-72 on all three scorecards.