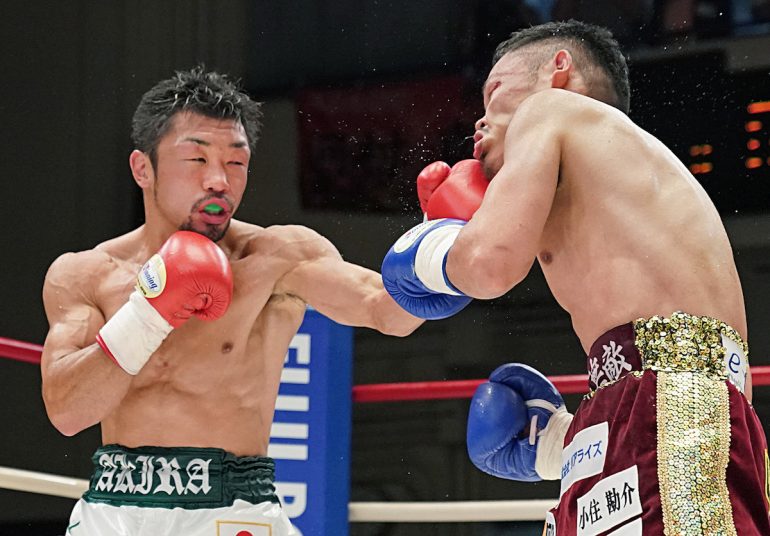 Akira Yaegashi has been in plenty of ring wars throughout his 13-year career, but the former three-division champion showed that he had at least one more left in him on Friday night.

The 35-year-old action star rang up his second-straight victory, stopping Hirofumi Mukai at 2:55 in Round 7 of their junior bantamweight fight at Korakuen Hall in Tokyo, Japan.

Yaegashi (27-6, 15 knockouts) didn’t wait for an invitation as he jumped in on the larger Mukai (16-6-3, 6 KOs), a career junior bantamweight who had twice challenged for world titles unsuccessfully. Yaegashi switched his attack to the body in the third and began to mark up the face of the southpaw Mukai with his left hooks. The nonstop pressure of Yaegashi’s attack and his accuracy with the right hand had Mukai ready to go near the end of the fourth.

Even as he dominated much of the action, Yaegashi’s eyelids began to swell — as they almost always do — creating opportunities for Mukai to land.

Midway through the sixth, Mukai buckled Yaegashi’s legs with a straight left hand, sending him into the ropes dazed, followed by a right hook which staggered Yaegashi across the ring. In that moment it seemed as if the hard battles had caught up to Yaegashi, but as had happened in so many other brawls, his heart pulled him back into the fight.

With 30 seconds remaining in the round, Yaegashi landed a counter right as Mukai jumped in, leaving Mukai nearly out on his feet. Mukai fell to the canvas and took a few seconds longer than usual to get up from a slip. Yaegashi pounded away at Mukai in his own corner and gestured to the crowd at the bell of what is surely a candidate for Round of the Year.

Round 6 of Akira Yaegashi vs. Hirofumi Mukai was an absolute Round of the Year candidate! Yaegashi was nearly out midway through the round, then comes back and nearly finishes Mukai. An incredible brawl #boxing pic.twitter.com/Q1jTwhsBmu

Sensing his opportunity, Yaegashi came at Mukai like the Tasmanian Devil, battering him around the ring with a two-fisted attack until Mukai collapsed into the referee’s arms, and then to the canvas.

It was the kind of slugfest which reminded fans who Yaegashi is — a necessary reminder after he lost his IBF junior flyweight title by first-round stoppage to Milan Melindo in May of 2017.

Now two divisions up at 115 pounds, he’s looking out into a division full of strong, young titleholders like WBC and Ring champion Srisaket Sor Rungvisai, IBF beltholder Jerwin Ancajas and WBA titlist Kal Yafai, with the vacant WBO to belong to the winner of Donnie Nietes-Aston Palicte.

Akira Yaegashi put a fierce beating on Hirofumi Mukai to score a seventh round TKO on Friday in Japan. At 35, the 3-division champ still has some fight left in him #boxing pic.twitter.com/pwsuxCIDCA

Without any cuts to heal, Yaegashi has enough time on the calendar to rest up and prepare for another New Year’s Eve fight in Japan, should that be on his agenda.

Also on the card, 2012 Olympic bronze medalist Satoshi Shimizu kept his knockout streak alive, stopping Shingo Kawamura at 2:43 of the fourth round to move to 7-0 (7 KOs) since turning pro in September of 2016.