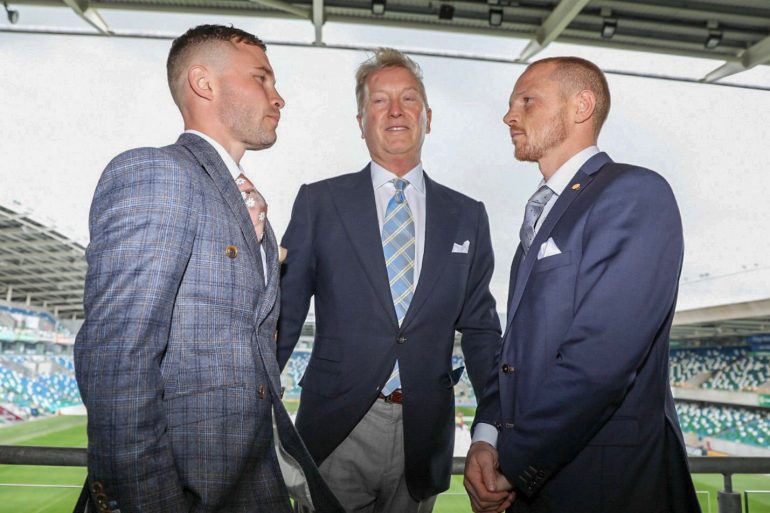 The rain fell in Belfast and, eventually, so did the visitor.

In a featherweight attraction, local hero Carl Frampton kept himself on course for another world title bout by scoring a ninth-round stoppage against Australian Luke Jackson at Windsor Park stadium in Belfast, Northern Ireland, on Saturday. The official time was 1:21.

In the eighth, Frampton, who is rated No. 3 by The Ring at 126 pounds, dropped Jackson with a terrific left hook to the body, which was disguised extremely well by a left uppercut. There was no recovery and a quick burst from Frampton in the ninth forced the underdog’s team to throw in the towel as the referee simultaneously stopped the bout.

“The crowd were fantastic tonight and you just made my dream come true,” said Frampton who has wanted to perform at the national soccer stadium at Windsor Park for several years.

“(Jackson’s) corner threw the towel in, but I think Luke would have stayed in there for as long as possible. He’s a real credit (to the sport).”

Jackson looked cautious from the beginning as he watched the best fighter he’d ever faced go to work in front of him. Frampton was the only one throwing in combination and the visitor merely responded with a probing jab and foot movement.

As early as Round 2, Jackson was in a panic. His body language suggested “leave me alone” and Frampton sensed that. The former champion attacked the body for the first time and there was one memorable left hook to the chin.

A little blood oozed from the side of Frampton’s right eye in the third, but the action remained the same. There was the odd moment of success from Jackson, but the former champion was producing all the eye-catching work which included a powerful right uppercut that consistently pierced the guard.

The switch back to the body proved to be decisive, however, and brought about the end of the fight. This was Frampton’s first stoppage since he blasted out American Chris Avalos in the fifth round in February 2015.

The 31-year old boxer-puncher had hoped to lure one of the four featherweight titleholders to his beloved Windsor Park. However timing intervened and Frampton was forced to keep his tools sharp against what he knew was an inferior opponent.

Regardless, the Belfast star will be happy that he displayed good form and, if his recent interview with The Ring was anything to go by, a world title fight will be next on the agenda. “The Jackal” holds an interim WBO belt and is therefore mandatory challenger for Oscar Valdez, but IBF counterpart Josh Warrington was in attendance and the drum roll for that domestic showdown has already begun.

Promoter Frank Warren then revealed that the fight is “official”.