Carl Frampton: ‘I can do whatever I want with Luke Jackson and I’m a level above’

When Carl Frampton fights in Belfast it an absolutely electrifying occasion, reminiscent to the glory days of Ricky Hatton in his home city of Manchester.

I’ve watched Oscar De La Hoya, Floyd Mayweather and Manny Pacquiao, the three most powerful pay-per-view stars in boxing history, do their thing in Las Vegas and those experiences were incredible. But, I can honestly say, none of them rivaled a Frampton homecoming.

In April, there was no world title on the line when Frampton (25-1, 14 knockouts) squared off against former four-weight world champion Nonito Donaire. And there didn’t need to be. As always, the crowd at the SSE Arena (formerly the Odyssey) rose as one for their fistic hero and the noise was deafening from the first round to the last round.

Frampton, currently rated No. 3 by The Ring at featherweight, claimed a 12-round unanimous decision over “The Filipino Flash” and the former two-weight world titleholder was more than pleased with his night’s work.

“I think after the (Leo) Santa Cruz fight that I won, it was probably my second-best performance,” said Frampton in an interview with The Ring. “After the performance I had in my previous fight (UD 10 Horacio Garcia), a lot of people thought the Donaire fight would be closer. There were even people who thought I was going to lose.

“I felt good throughout the 12 rounds. I was wary of Donaire’s power because, even though he’s moved through the weights, he can certainly punch. Just imagine being hit by that as a flyweight! But physically I felt a lot stronger and I was pushing him around at times. I just needed to be focused, stick to my game plan and remain disciplined. I think I did that.”

Without question, it would have been natural progression for Frampton to walk into another world title fight. The Belfast man was back to his best and his star power was as strong as ever. However, in boxing, like any other sport, you need a bit of luck and Frampton’s dice came up snake eyes.

“The Jackal” is mandatory challenger for WBO titleholder Oscar Valdez, but the talented Mexican was still recovering from a broken jaw sustained in his March victory over Scott Quigg. Josh Warrington defeated Lee Selby for the IBF title in May and wanted some well-deserved chill time. WBC boss Gary Russell Jr. came out of his annual hibernation to outpoint Joseph Diaz Jr. in June, so we probably won’t see him again until next year. And, finally, Frampton’s old foe, Leo Santa Cruz, scored a rematch victory over Abner Mares in June to retain his WBA belt and was unavailable.

But life goes on as they say and Frampton had a date at his beloved Windsor Park (Northern Ireland national soccer stadium) penciled in. What Frampton really needed, though, was a dance partner and both he and promoter Frank Warren went Down Under to find one. On Saturday, the former champion will face unheralded Australian Luke Jackson (16-0, 7 KOs) in front of approximately 25,000 fans. The only question is, can Frampton get up for a fighter who is 16-1 against according to the oddsmakers?

“People talk about it being difficult to get up for fights, but I will not find it difficult to get up for Windsor Park,” Frampton said defiantly. “I cannot wait for it and I’m excited. It’s a big occasion with Paddy Barnes fighting for a world title (against WBC flyweight titleholder Cristofer Rosales) and (Tyson) Fury on the bill (against Francesco Pianeta). It’s a really good bill and there’s title fights and big names involved.

“There will probably be even more butterflies than normal because so much is expected of me. People are expecting me to win and I don’t want to let anyone down. I want to put on a performance that I’m happy with and the fans are happy with. There will definitely be butterflies, but I believe that I can cope with that and that’s very important.” 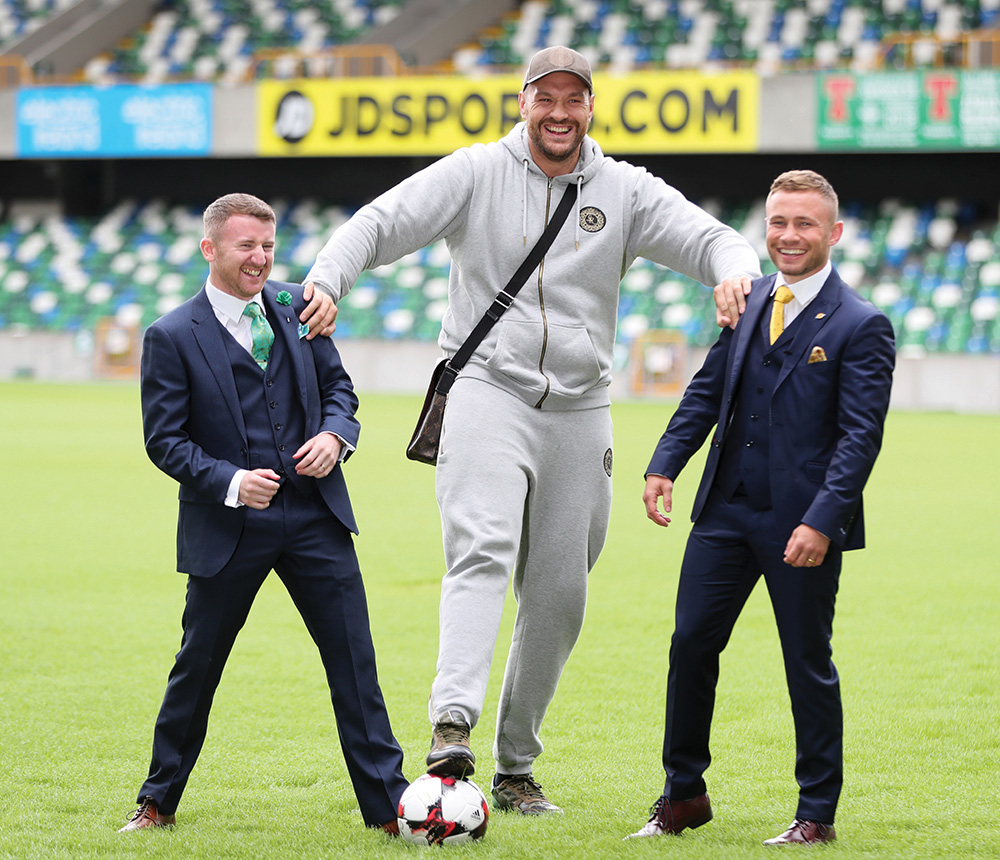 The other factor is than Jackson has injected some bad blood into the promotion by downplaying his opponent’s abilities. Frampton, a staunch professional, does not take verbal infringements lightly and one senses that he’s looking to do a serious number on the visitor.

“He’s irked me a little bit but it’s nothing, and I don’t know what his plan is. They’ve probably looked at the Garcia fight and thought to themselves, let’s drag Frampton into the second half and hope that he tires. But I just done 12 rounds with Donaire standing on my head. I’ve trained tough and prepared myself in the gym. Whatever he wants to do, I’m going to be better and that’s the bottom line. I can fight better than him, I’m faster than him, I punch harder, I take a better shot and I have more boxing savvy. I can do whatever I want with Jackson and I’m a level above.”

Despite the dream locale, this is essentially the fight before the fight. Frampton wants to put on a show and send a statement of intent to the world champions at 126 pounds. He would dearly love a knockout, given that his last victory inside the distance was a fifth-round stoppage of Chris Avalos in February 2015. The 31-year-old boxer-puncher also insists that he couldn’t be happier with life and his chosen profession, and a happy fighter is a dangerous fighter.

“I genuinely feel brilliant and I’m enjoying boxing,” said Frampton. “Before I’d wake up and think, ‘Oh for fuck sake, another day in the gym’. I genuinely didn’t like the training but I done it because it was my job and I had to do it. It’s different now. I wake up in the morning, have some breakfast and there’s a bit of craic in the gym. I do my training, have a laugh and it’s a good environment to be in.

“After this fight, I want to get a champion in the ring. You’ve got Warrington who’s with Frank Warren so that should be an easy fight to make for the IBF title. I’m interim champion with the WBO so I’m mandatory for Valdez. One of them is likely to be my next fight, but I can’t look past Jackson. He thinks, and maybe he’s trying to take some comfort from this, that I’m looking past him, but he’s mistaken. I need to beat this guy and then we can talk about Valdez and Warrington.”