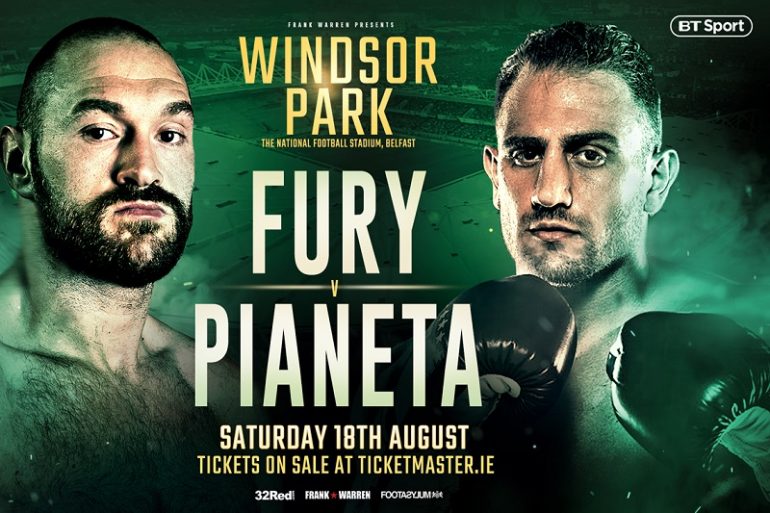 “I’m going to give my best and I’m looking forward to the fight. It’s an honor for me to box in front of such an audience.”

“I have a high opinion on Tyson (Fury). I was very impressed with his win over (Wladimir) Klitschko; I rate him very highly. He says that he’s knocked out every southpaw he’s ever faced but we’ll see if he is able to do that Saturday night.”

Francesco Pianeta seemingly comes from the Sefer Seferi school of pre-fight trash-talk, as he was exceedingly reasonable and even deferential at the Tuesday press conference to hype the Saturday night tango between comebacking Tyson Fury (26-0, 19 knockouts, age 30) and Pianeta (35-4-1, 21 KOs, age 33, from Italy).

They will face off at Windsor Park, in Belfast, and in the U.S., fans can watch on Showtime’s available streams.

I confess I gain no confidence that Fury will have much of a tougher go than when he downed Seferi, in the definition of “easy work” on June 9.

One could argue that it’s better for a boxer to not set up unreasonable expectations, talk a great game and then underperform…

So perhaps it’s best that the Italian didn’t dig himself too deep a hole at the presser, especially since he is coming in off a loss, to Petar Milas (12-0, 9 KOs), beat a 1-0 guy one bout before and was stopped by journeyman Kevin Johnson before that.

So word to the wise…keep your expectations at a reasonable level, fans, and expect Fury to have his way with Pianeta, for every second of every round, as he did Seferi. And if you are a betting man, it might be wise to note Pianeta has been stopped three times in four defeats. Expect four of five to be in play Saturday.