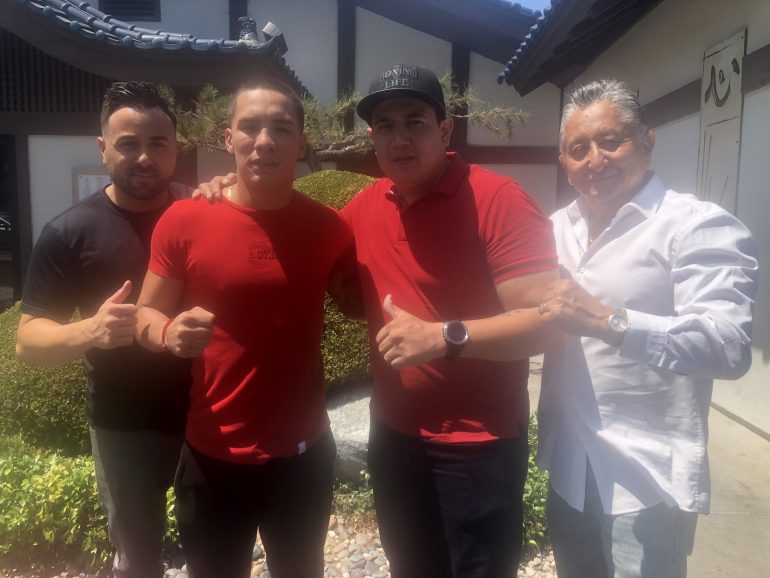 Coming off back-to-back grueling fights and a major injury, Oscar Valdez is making a change.

The featherweight titleholder announced Monday that he’s parted ways with trainer Manny Robles, and that once he’s fully recovered from his fractured jaw, he’ll begin training with Eddy Reynoso ahead of an early 2019 ring return

Reynoso is best known for his work with Canelo Alvarez, and the Mexico-based trainer is in San Diego with the star fighter right now ahead of the rematch with Gennady Golovkin on September 15.

After that fight is out of the way, Reynoso will begin work with one of the sport’s most reliable action fighters.

Valdez (24-0, 19 knockouts) suffered the broken jaw during his March victory over Scott Quigg. The Brit failed to make weight and appeared to be far larger than Valdez, which contributed to the injury, but there’s no doubt that the two-time Mexican Olympian needs to shore up his defense and movement if he wants a long shelf life.

“I want to thank Manny Robles and his whole team for everything they have done for me over the last few years, but like everything in life, changes are sometimes needed to move forward,” said Valdez, The Ring’s No. 4 fighter at 126 pounds.

“As a boxer you have to able to develop as much as you can and I believe that this change to Eddy Reynoso will help me become an even better all-around boxer and fighter. I want to be one of the best fighters in the world and leave the best legacy that I can in boxing. And I will always work hard to achieve the greatness that I seek.”

Robles led Valdez to victories in five title fights, but the 27-year-old has yet to face an elite opponent and his last three bouts exposed some of his flaws. Valdez plows forward and is a willing target for power punches.

He was knocked down in his September fight with Genesis Servania, and in his April meeting with Miguel Marriaga, he was hit with plenty of slow, looping shots. Robles is a highly regarded trainer who works with Jessie Magdaleno and Dominic Breazeale in Southern California, but Valdez’s manager, Frank Espinoza, is confident that Reynoso is “better-suited … as we move forward to bigger challenges.”

Reynoso has slowly guided Canelo to the top of the sport, and the former Ring middleweight champion has added layers to his game since he first burst onto the scene. Once a man who relied on pressure to break down his opponent, Canelo is now equally adept at defeating an opponent behind a jab, lateral movement and solid defense.

“This is a challenge for me because Oscar Valdez is a great fighter,” Reynoso said, “and one of my goals is to work on what’s necessary to make him a complete fighter.”

Boxers are traditionally quick to blame their trainer when they hit a rough patch, and sometimes they’re right — a change is in order.

Valdez is going to find out if his defensive limits are permanent or simply a matter of technique.