Reymart Gaballo gets national TV exposure for next fight in Philippines 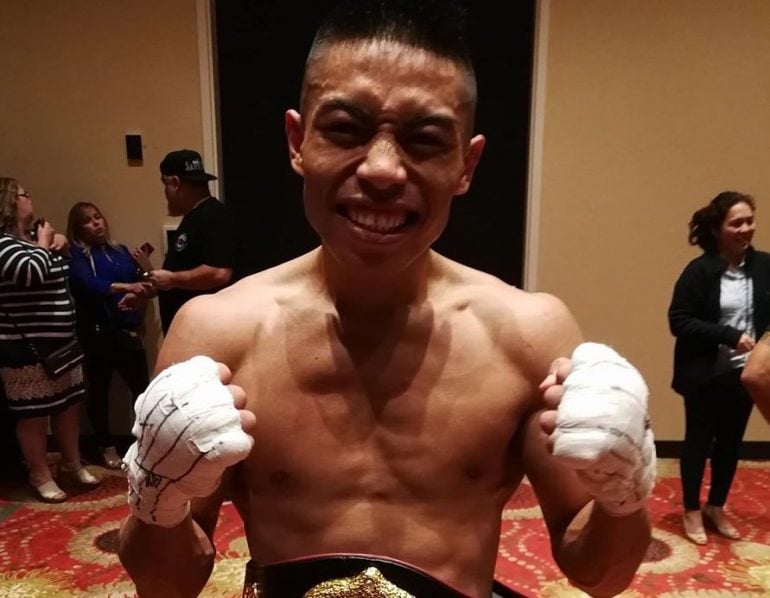 For most boxers, the dream is to stand victorious over your opponent, your arms raised with only your fists as judges. That scene had become so commonplace for Reymart Gaballo that he started wishing for something else.

Prior to his last fight against Stephon Young in March, Gaballo told his promoter Jim Claude Manangquil that, since 14 of his previous 18 bouts had ended in the first two rounds, he had hoped to be extended the twelve-round distance for the first time in his career.

Manangquil had forgotten about it until just before the tenth round of the Young fight at Seminole Hard Rock in Florida, when he tried to pump up his 21-year-old fighter as he closed in on the vacant WBA “interim” bantamweight belt.

“I asked him ‘what is our dream?’ I thought he would say to win the world title. He said ‘yes boss, I’m gonna do our dream. I’m gonna go 12 rounds,’” recalled Manangquil.

Gaballo (19-0, 16 knockouts) got the unanimous decision against the previously unbeaten American that night, and the second-tier belt, but few outside of the arena that night are likely to have seen the fight since it wasn’t televised.

Gaballo will have a much bigger viewership for his next fight when he faces Tanzania’s Julias Kisarawe (29-6-1, 15 KOs) on September 30 at SM City North EDSA Skydome in Quezon City, Philippines in a 10-round non-title fight.

Kisarawe, 28, isn’t likely to extend Gaballo many rounds as he has lost each time he’s fought outside his country, including last month when he was stopped in five rounds by Prince Patel.

What the fight will do is put Gaballo in front of his largest Philippine audience as it’ll be shown live on ESPN 5, which has a massive sports audience with Philippine Basketball Association (PBA) games, plus pro volleyball and an expanding boxing program anchored by the fights of IBF junior bantamweight titleholder Jerwin Ancajas. Manangquil says the bout will be an introduction on the network before moving forward with bigger fights.

News of the card was broken during the broadcast of the PBA Commissioner’s Cup championship game last week, potentially exposing Gaballo to millions of viewers.

Gaballo is usually trained by Osmiri “Moro” Fernandez down in Miami but will train for this fight at the Sanman Gym in General Santos City with Fernando Lumacad before Fernandez flies in for the fight.

Also featured on the card will be former WBO bantamweight titleholder Marlon Tapales, who will be fighting for the first time since losing his title on the scales against Shohei Omori in April of 2017. Tapales (30-2, 13 KOs) will compete in a 10-round junior featherweight bout against Goodluck Mrema (22-3, 12 KOs), whose last appearance in the Philippines a year ago ended in a 78-second KO loss to Jeo Santisima, and who was stopped in four in June by Lee McGregor in Scotland.

Tapales is still handled by Rex “Wakee” Salud but trains at the Sanman Gym, putting in quality rounds of sparring with Gaballo.

“Marlon and Reymart are really good friends. Marlon is there only for a month and a half, but they’re very close. He’s teaching Gaballo a lot, they’re sparring partners but after sparring Marlon gives a lot of advice to Reymart,” said Manangquil.