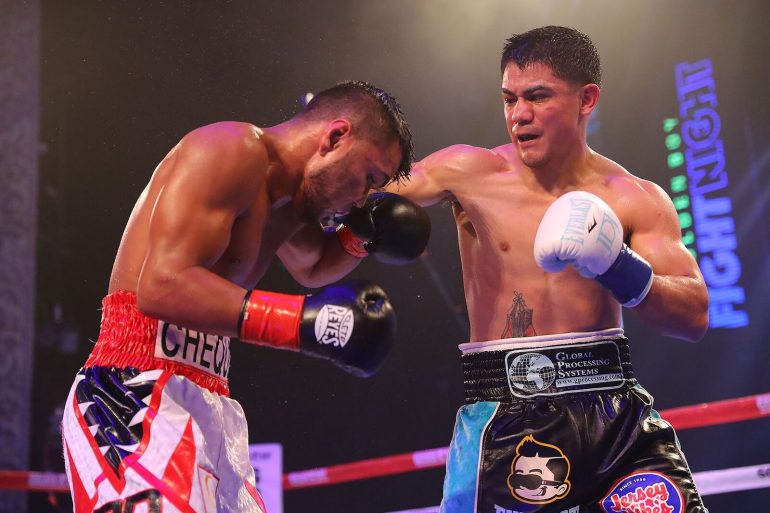 HOLLYWOOD, California – Joseph “JoJo” Diaz made good on his promise to bounce back from defeat after his decision loss to WBC featherweight titleholder Gary Russell Jr.

Diaz, who is rated No. 8 by The Ring at 126 pounds, was able to grind out a 12-round unanimous decision over Jesus Rojas Saturday night at The Avalon.

“I lost my last fight and I wanted to come back strong for this fight,” said Diaz afterwards.

The only disappointment for Diaz was that he was not able to win the WBA “regular” title. Diaz weighed 126.6 pounds at Friday’s weigh-in and had to forfeit 20 percent ($10,000) of his $50,000 purse to Rojas and the California Athletic Commission. As per WBA rules, Rojas would retain the title win, lose or draw.

The southpaw Diaz was effective fighting from distance, slipping and countering the aggressive Rojas throughout most of the fight.

Rojas did find success pinning Diaz against the ropes or in a corner, ripping combinations to the head and body. Both fighters had their moments in the center of the ring to the delight of the sold-out partisan crowd.

But it was Diaz’s quickness and effective counterpunching that won him the close rounds. The affable Californian also kept up the pace in the closing stages, choosing to stand trade with Rojas rather than sit on his lead.

“(Rojas) got me with good uppercuts,” said Diaz. “He landed good shots. I knew he was going to be aggressive and strong. Me being a southpaw was an advantage, but I felt my training and executing my game plan were the keys (to victory) tonight.”

“I wasn’t able to fight to my best,” said Rojas, who resides in Caguas, Puerto Rico. “I felt great. This was a great fight between Mexico and Puerto Rico.”

With Rojas retaining his belt, he still has high hopes of facing the other titleholders in the division.

“I want to face (Leo) Santa Cruz and Oscar Valdez. If the promoters want me to fight Diaz again, then I’ll fight him,” he said. 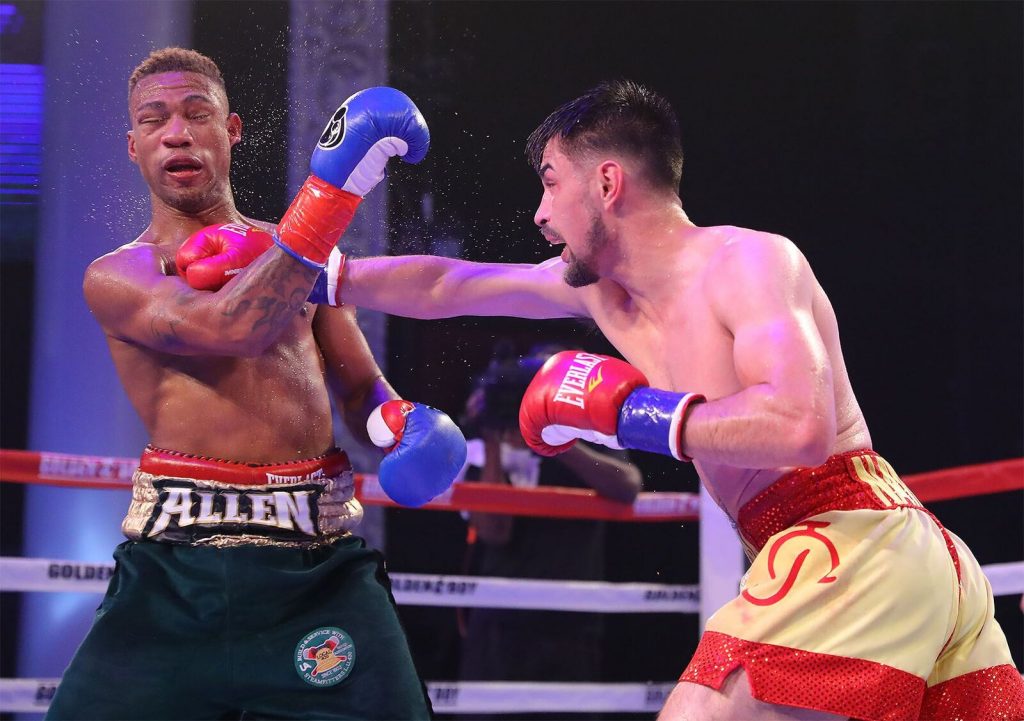 In a clash of unbeaten junior welterweights, Jonathan Navarro stopped Damon Allen Jr. in the seventh round.

After a competitive opening session, Navarro began to land the more effective punches.

Allen was deducted a point from referee Zac Young for a low blow in Round 3, although he did well at the end of that session.

A right cross from Navarro stunned Allen midway through the fourth, and he did well to survive another combination in the fifth which wobbled him badly. And things only got worse in Round 6. A right hand from Navarro hurt Allen near the end of the session and another right hand dropped him at the bell. The referee ruled the shot came after the bell and did not administer an eight-count or deduct a point from Navarro.

Allen came out of his corner for Round 7 on wobbly legs and attempted to hold or box, but a left hook staggered him again. A quick follow up combination from Navarro prompted Young to step in and stop the fight at 1:33.

Kerobyan, who is originally from Armenia and now resides in nearby North Hollywood, walked the southpaw Rivera down, forcing him to fight defensively. Kerobyan hurt Rivera (6-4, 4 KOs) a handful of times in the final round but was not able to put him down.

In the opening bout of the telecast, welterweight Aaron McKenna remained unbeaten with a four-round unanimous decision over Rolando Mendivil (10-5, 3 KOs) of Mexico.

Mendivil was competitive during the opening round, but McKenna landed the sharper and more telling blows thereafter. McKenna, who is the youngest fighter under the Golden Boy Promotions banner, landed several flush right hands but Mendivil somehow made it to the final bell.