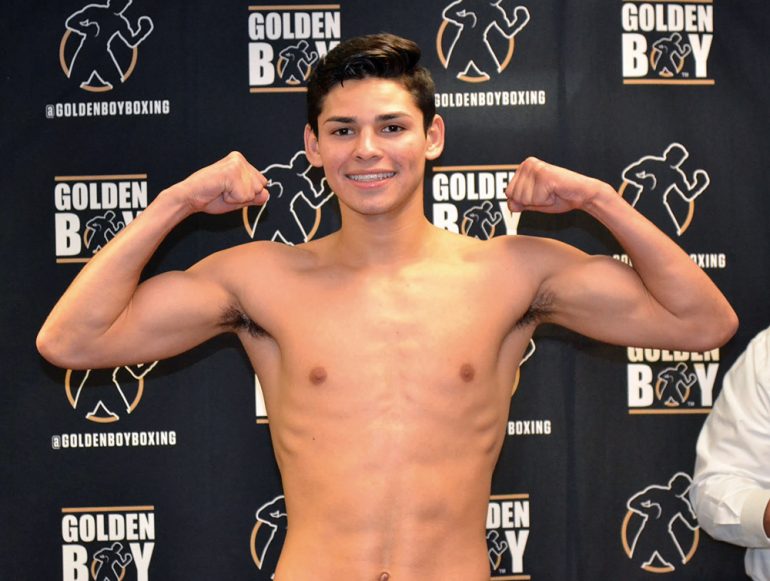 Ryan Garcia will enjoy his greatest exposure yet.

The 19-year-old from nearby Victorville has impressed with his punching power, and he already boasts a large teen following with over 1.1 million Instagram followers.

“I feel amazed, honored and excited,” said Garcia. “I’ve changed up my team and we’ve been working on my craft. I’m more focused now than ever before, and I’ve been working on the body shots. I won’t reveal too much now, so everyone will have to tune in. I’m going to show fans why we are the hottest thing in boxing.”

Garcia (15-0, 13 knockouts) oozes charisma and combined with his good looks, Golden Boy has big plans for him. He picked up a career-best victory in May when he outpointed former title challenger Jayson Velez, but Garcia remains a work in progress.

Morales (17-2-3, 6 KOs) should provide another measuring stick as Garcia continues to develop his way to becoming a contender. The 28-year-old native of Mexico has yet to fight in 2018, but he’s coming off a victory over Dardan Zenunaj. Before that, Morales was outpointed by Alberto Machado, who went on to win a title.

“This should be an entertaining fight,” Morales said. “Ryan Garcia is a good fighter, and I always like to fight good opponents.”

Garcia has been trading verbal jabs with the likes of Gervonta Davis and Teofimo Lopez. A victory over Morales should bring him one step closer to those far more significant fights.