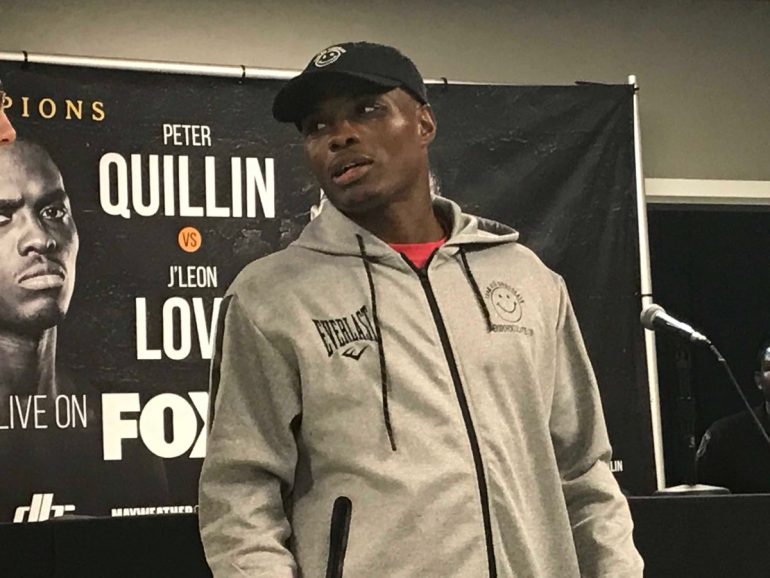 UNIONDALE, N.Y. – What started as an innocuous question about readiness to contend for a title in a new division briefly became one of Peter Quillin’s hottest contested exchanges of the night.

“Looking at 168 pounds there’s Jose Uzcategui…George Groves, Gilberto Ramirez, there’s David Benavidez. Have you looked at some of those guys, and do you think you’re ready for them yet?”

“I got 36 fights as a professional, what the fuck are you talking about?,” Quillin responded to this writer. “I’ve been up there with Andy Lee, Hassan N’Dam, I got some highlight reels out there.”

Quillin (34-1-1, 23 KOs), a former WBO middleweight titleholder, had just defeated J’Leon Love by unanimous decision Saturday night in what was his first fight of note as a super middleweight, and just his second fight after missing all of 2016 and most of 2017.

If Quillin appeared evasive about discussing the upper crust of the division, it could be due to his newfound outlook on the world which mixes the biblical humility that helped pull him out of dark times when he was contemplating suicide, and his past experiences as a young middleweight trying in vain to get fights with Sergio Martinez, Jermain Taylor and other well-known names.

“I don’t try to tell someone what’s my personal ambitions, ’I’ma try to be a champion.’ Reading the Bible says that those kinds of ambitions are demonic and worldly,” said Quillin.

“My job is to do the will of God. That could be losing. I lost to Danny Jacobs and that was God’s will for my life.”

With a bit more prying, Quillin reveals there are some fighters in the division he’d steer clear of because they’re personal friends of his. Fighters like Caleb Plant, the mandatory for the IBF titleholder Uzcategui, plus WBC titleholder Benavidez and perennial contender Andre Dirrell, fall into the category of people he has “history” with.

“It’s hard to be saying I want to be fighting my friends,” said Quillin.

Not counted among his friends are Groves, holder of the WBA belt, and James DeGale, who relinquished the IBF title in order to chase “massive fights” and not be encumbered by mandatory defenses. Quillin knows that it matters little what he says, and that business dictates what fights are made.

“That’s why I don’t put too much information out there because the fights are gonna be made behind the scenes no matter what,” said Quillin.

The win over Love, who like Quillin entered with just one prior defeat, was his first with new trainer Aureliano Sosa, also of Brooklyn. At once, Quillin claimed to not hear the cheers and only the voice of Sosa and his assistants in the corner. Yet during the fight, he wanted others to hear his voice as he turned to Love’s corner while they shouted instructions mid-round and told them “He ain’t about to do that to me”, and narrowly avoided being hit by a right hand for his lapse in attention.

At another time, he looked away from his opponent to ringside to speak to Love’s promoter Floyd Mayweather Jr., who like Quillin is also a native of Grand Rapids, Mich.

“Floyd, you came to my school and you told me I can do it and I’m here now. But I still love you brother,” Quillin says he told the living legend.

The fight, which was the co-feature to the Andre Berto-Devon Alexander-headlined PBC on Fox card at Nassau Coliseum, was Quillin’s first step back into the spotlight in some time. He spoke of the abandonment he felt after many in his circle jumped ship following his first-round knockout loss to Jacobs in 2015, and of his struggle to be a better father to his two kids and a better husband to his wife.

“I lost so much money, I can’t even tell y’all the amount of money I lost with friends. Bad business investments. When you’re from the hood like I’m from, they teach you how to make money but they never teach you how to save it,” said Quillin.

“When I lost to Danny Jacobs I was OK with the loss; it was a hard thing to start to lose people around you. Like family, friends, people I thought were true supporters of mine, they started to disappear. They started to abandon me in my worst time.”

Lou DiBella, who promoted the show and many of Quillin’s early bouts, had lost his own brother to suicide, and praised Quillin for speaking out on the subject of depression.

“It takes a lot of guts to say you’re suicidal,” said DiBella. “I’m proud of him for saying ‘go get help, overcome your demons.’

Quillin says he’ll take the mandated seven-day rest from training and will travel to Cuba later this month to meet an older sister for the first time, plus spend time at some boxing gyms there and try to attain dual citizenship.

At age 35, “Kid Chocolate” is a fine-aged confection and says he doesn’t have time for long layoffs.

“I will go in the gym Monday and run. I don’t got nothing else to do. I’ll just be at home barbecuing with my kids.”