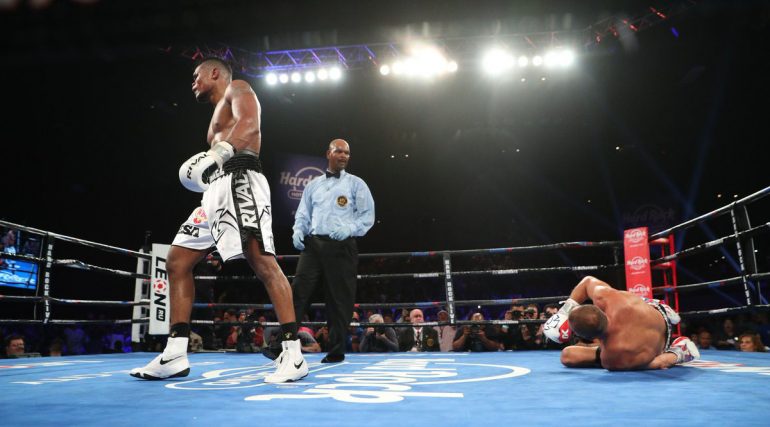 Somewhere, John David Jackson was probably laughing. Who was Sergey Kovalev going to blame this time? There was no dubious scoring. There were no borderline punches. There was no trainer to blame, as Kovalev did with Jackson in his consecutive losses to Andre Ward.

In a word, “The Krusher” got crushed.

Eleider “Storm” Alvarez shocked the boxing world with a devastating seventh-round knockout of Kovalev, dropping the Russian expatriate three times before referee David Fields waved it over at 2:45.

The 34-year-old Alvarez (24-0, 12 knockouts) is now the new WBO light heavyweight titleholder, thanks to a powerful overhand right hand that sent Kovalev down the first time and a left hook/right that felled him a second time. By then, Kovalev was out on his feet and it only took a short right from Alvarez to floor Kovalev a third time.

“I want to thank God and all my fans in Canada and Colombia,” Alvarez said. “This was all for them. It was a combo that I have been throwing my whole career and we worked on it in camp. I have always practiced that in camp and we thought it would work in this camp.

“As the fight went on, I wanted to show that I could stay strong and do good things. His punches were not as hard as they were in the beginning of the fight. I am ready for all the best fighters in my division and the best in the world.”

Through six rounds, Kovalev was ahead on all three scorecards. Judges Joseph Pasquale and Lynne Carter had Kovalev ahead, 59-55, while judge Carlos Ortiz had it 58-56 for The Krusher. The judges agreed on the third, fourth and sixth rounds, awarding each for Kovalev.

After five rounds, Alvarez had proven one thing: He has a hell of a chin. He withstood a number of Kovalev onslaughts, particularly in the fourth, and again midway through the sixth, when a cut opened under his left eye.

A replay showed Kovalev (32-3-1, 28 KOs) did slam the crown of his head into the left side of Alvarez’s face, thought it wasn’t exactly a conclusive answer as to how the cut happened.

This marks the third time Kovalev, 35, has lost in his last five fights, and serious questions have to be asked about where he goes next.

Entering the fight, Kovalev said he felt he had a deeper connection to new trainer Abror Tursunpulatov. “I have a filter when it comes to advice and my ears don’t hear bad advice,” Kovalev said before the fight. “[Jackson] didn’t give me good advice. I’m happy now with my coach.

“When I came to America, I worked with Don Turner, Abel Sanchez and then John David Jackson; I never felt a connection. They didn’t really work with me personally. It felt like they clocked in and clocked out. There was no connection.”

In the end, there was a major disconnect—just after Alvarez’s right hand touched Kovalev’s chin.

Speaking on Instagram from the back of an ambulance en route to a local hospital, an upbeat Kovalev reassured everyone he was all right. “I am on my way to the hospital to check my head, check my body … I feel OK,” he said. “Thank you everyone, thank you very much to all the fans around the world for your support. I love you, and I’m fine.”