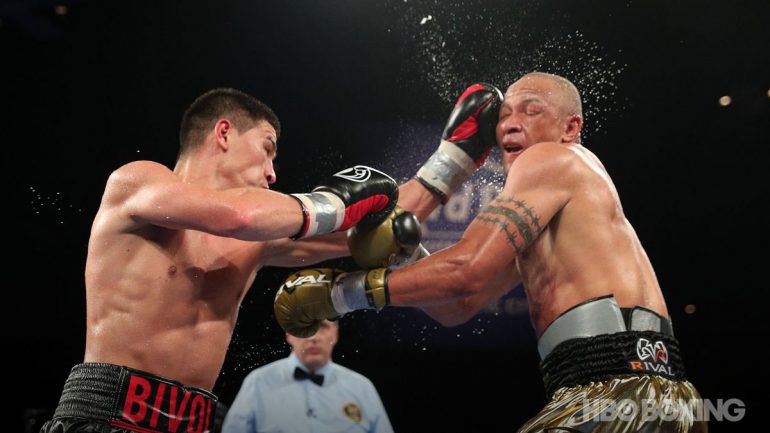 ATLANTIC CITY, NJ — There are two distinctive welts under Dmitry Bivol’s eyes that make it look like he was in a fight, before he’s in a fight. The sharp ridges are like two gaping cuts waiting to happen. One punch on either of those edges and scarlet faucets would flow.

It’s just getting to them—and to Bivol—that is the hard part.

Judges Henry Grant and Ron McNair both saw a Bivol shutout, 120-108, while judge George Hill saw it closer at 116-112 for the fighter from St. Petersburg, Russia.

“Chilemba is a good fighter and he had champion spirit tonight,” Bivol said afterward. “He is a strong fighter. I want to fight more good fighters. I don’t know who my next opponent will be. (Sergey) Kovalev? We will see what will happen today. If the fans want that fight it will happen. I just want to fight the best fighters.”

In the first round, Bivol rocked Chilemba early, then the two measured their distance from each other. A Bivol left to the body had Chilemba bending.

By the second, Chilemba was all lumped up. A Bivol left hook started it, followed by a barrage of shots that had Chilemba retreating. A Bivol left uppercut landed square on Chilemba’s face, and once again, Bivol was doing the stalking and Chilemba forced into a defensive posture.

As fans began chanting his name in the third, Bivol connected with a left to the body. But Chilemba did show some fight, batting back. Bivol was in firm control after three.

Bivol landed a left hook to Chilemba’s chin in the fourth, and then began his patient stalk again. Bivol’s body shot had forced Chilemba to lower his guard to protect against the body shots.

In the sixth, Chilemba’s left eye began swelling shut. The Malawian had put up a gallant effort, though it was obvious he couldn’t do anything to damage or scare Bivol.

Fighting with an abundance of confidence, Bivol chipped away at Chilemba in the seventh. Chilemba tried backing him with a few jabs, then Bivol would glide in, tap Chilemba to the face, and get out of harm’s way before Chilemba could counter.

Besides, it didn’t matter.

Chilemba couldn’t do anything against Bivol.

In the eighth, a spattering of boos rained down on the fighters. Still, Bivol remained calm and steady in the pocket, bouncing on his toes and connecting. Though, Chilemba had an argument that the eighth was his best round.

The best exchange, to that point in the fight, came in the last minute of the ninth. Sensing he had to be more urgent, Chilemba possibly decided to try and attack more frequently. The decision wound up being a painful one, when Bivol bounced a right off Chilemba’s head.

In the 10th, Chilemba kept up his intensity. He even had Bivol backing up. In the next round, Bivol appeared content to back up and stay away. Bivol brought his guard up, but appeared to give the round away, believing he was far ahead—and he was.

Bivol kept his distance in the 12th, easily pivoting away when Chilemba tried closing the gap between them. He had to knock out Bivol to win, but you got the feeling he was fine with going the distance.

In a scheduled eight-round middleweight fight, rangy 6-foot Meiirim Nursultanov, from Merki, Kazakhstan, made easy work out of Jonathan Batista, who entered the fight 2-7 over his last nine fights. Batista (17-15, 10 KOs) was knocked down in the second, and the fight was stopped to a chorus of boos from the crowd that just began trickling into the Etess Arena.