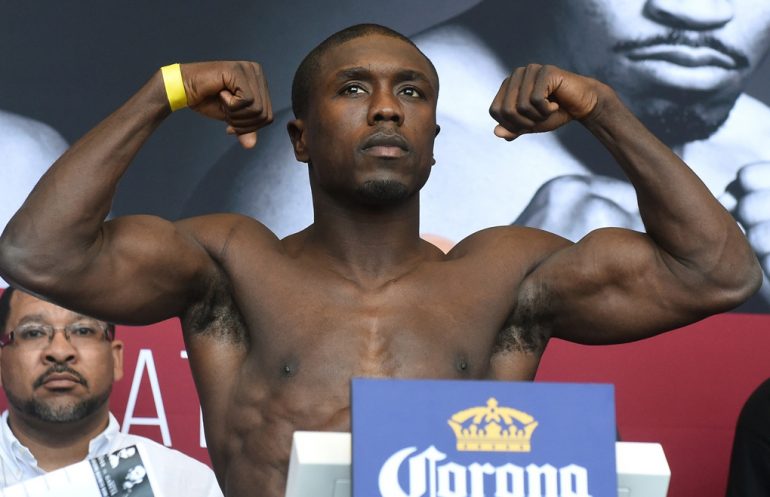 LONG ISLAND, N.Y. – For the first handful of rounds, Andre Berto looked stuck in neutral as Devon Alexander landed accurately with uppercuts and straight lefts through the middle. It wasn’t his night it seemed, and a knockdown call by referee Ron Lipton as Berto was spun around and hit twice behind the head did little to boost his morale.

Just before the seventh round began a wardrobe malfunction requiring his protective groin cup to be adjusted. Then, the following round, the business end of his cup slipped through his trunks and fell to the canvas.

As his protective cup abandoned ship and left him ungirded downstairs, Berto’s hands also became more free as he put together serious punches in close, bullying Alexander in close with his superior physical strength.

By the time the final bell rang, Alexander was the worse off, battered down by Berto’s uppercuts in close.

One judge scored the fight 114-113 for Alexander while the other two saw it 115-112 for Berto, giving the Winter Park, Fla., native Berto (32-5, 24 knockouts) a split decision win at Nassau Veterans Memorial Coliseum in Uniondale, N.Y.

Berto, 34, hadn’t fought since April of 2017, when he was stopped in nine rounds by Shawn Porter.

“I’ve been off for a while but it felt good in there. I felt like I was in better shape and quicker to the target than he was,” said Berto.

“I knew he was going to be quick and I knew he’d come to fight. I just had to get adjusted to his speed a little bit and then I started pressing him.”

The fight was Alexander’s third after a two-year layoff following his shock loss to Aaron Martinez, during which he battled and overcame an addiction to opiates.

“I thought I edged it out, but that’s my opinion. It was a close fight. We just have to go back and see what I have to do going forward,” said Alexander, who admits he slowed down late in the fight.

“We’re climbing back still. I’ll talk to my team and see what the best move is. This happens. He never hurt me, but he definitely came to fight. I needed to do better.”

It was the second loss in a row for the Alexander family on this night, as Alexander’s older brother Vaughn Alexander suffered his first pro defeat, losing on points to Denis Douglin in Atlantic City on the Sergey Kovalev-Eleider Alvarez card.