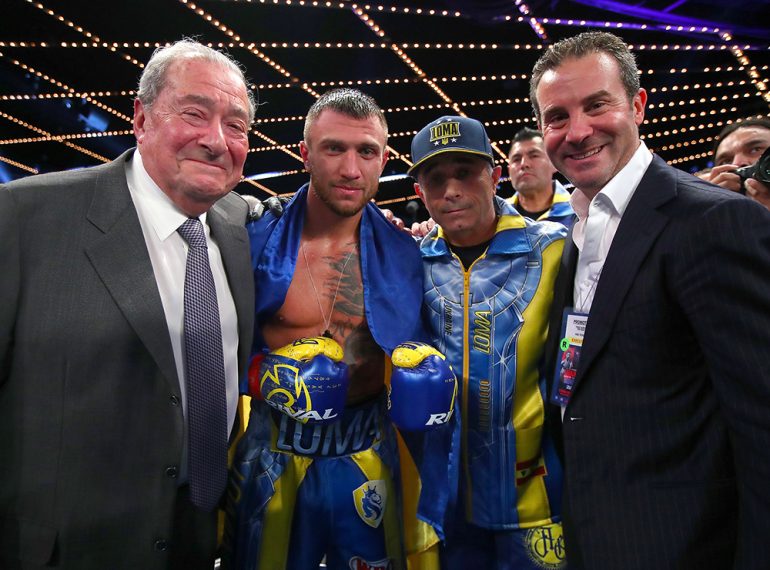 When Manny Pacquiao and Jeff Horn fought last July in the first bout of a four-year deal with ESPN, the network didn’t know what to expect.

For the greater part of the past 15 years, ESPN’s only foot in the boxing game was its low-budget offerings on Friday nights, and depending on the year, Tuesdays or Wednesdays.

But their partnership with Top Rank called for shows featuring the upper-crust of talent, and the promotion delivered ratings that far exceeded projections, particularly in the coveted 18-to-34 demographic.

Pacquiao and Horn was seen by as many as 4.4 million viewers, and Bob Arum’s company enjoyed more success with telecasts that followed on linear ESPN. Vasiliy Lomachenko and Terence Crawford, Top Rank’s two biggest stars and rated by many as the sport’s best fighters, each competed on ESPN and now that the network launched the streaming service ESPN+, boxing is more important than ever.

Boxing is the No. 1 sport driving subscribers to the direct-to-consumer app, and on Thursday, ESPN ensured fights would be a fixture for many more years to come with the announcement of a new partnership. Gone is the four-year deal signed last year, and in its place is a new seven-year commitment between ESPN and Top Rank that will deliver 54 shows per year.

It’s the strongest signal yet that boxing, despite its niche status in the United States, is not only thriving in a crowded marketplace, but growing in popularity.

“ESPN is thrilled with this new long-term agreement with Top Rank, which represents the most innovative and comprehensive relationship in the world of boxing today,” said ESPN President and Co-Chairman Jimmy Pitaro. “By creating and distributing significantly more Top Rank events and boxing content, ESPN and Top Rank will jointly cultivate upcoming fighters and fights, creating the stars of tomorrow while providing fans with the sport’s best content in a more personalized manner.”

The new deal calls for 18 shows to be broadcast on linear ESPN each year, with another 12 prime-time events on ESPN+, and 24 more international shows on the streaming service. The uptick in events also means more budget money allocated from ESPN for license fees.

Top Rank is now not only competing with HBO and Showtime, but also DAZN, the fledgling streaming service that will launch in the U.S. in September featuring fights from Eddie Hearn’s Matchroom Sport stable (in addition to the popular World Boxing Super Series tournaments.) HBO and Showtime have history behind them, but the former has languished on the ropes over the past couple years as their budget has been slashed to approximately $25 million amid rampant rumors they aren’t long for the sport.

Showtime boasts a budget twice that and their relationship with advisor Al Haymon means they have access to the best roster in boxing. What separates Top Rank’s relationship with ESPN is the quality of the promotional company and the network’s far-reaching grasp on sports fans.

The influx of cash should position Top Rank to compete for the services of top-level fighters who are promotional free agents, namely those advised by Haymon like Errol Spence Jr., the Charlo twins and Keith Thurman.

“Our objective is to have the best fights, the best fighters and to build out a place for the entire vertical of boxing on a platform that is the world wide leader in sports,” Top Rank president Todd duBoef, who was instrumental in structuring the deal, told The Ring. “I think we’ve shown that so far getting (Jorge) Linares for Lomachenko, and using (Regis) Prograis with Lou (DiBella) and buying an (Naoya) Inoue fight from Japan and (Amir) Khan form England.

“If any top fighters are available and they don’t have a network partner, I would gladly welcome them to the platform. Since I’ve been in the business for 25 years, we’ve always been at the forefront of signing the best talent out there. … We’re always in the marketplace.”

Even without any new additions, Top Rank is positioned strongly atop the sport. In addition to Lomachenko and Crawford, their stable of prospects, which includes Olympians Teofimo Lopez and Shakur Stevenson, is considered the best in the sport. Haymon’s roster that competes on Showtime is still the best — and biggest — at the moment, but duBoef’s long-term vision for boxing on ESPN is ambitious.

“ESPN’s approach with looking at boxing itself as a property and not as a series of one-offs” is like-minded with our strategy,” duBoef said. “That’s the proposition that we’re both committed to. When you look at the success of the NBA and NFL you have to look at the entire portfolio.

“The real comparison, in my mind, is college football. … You look at a lot of media partners in the space that own content. Fox has a package, CBS has a package, but every Saturday afternoon, people go to (ESPN) College Gameday, and they cover everything.”

HBO, Showtime, and soon DAZN, will be competing with ESPN for market share and viewers, but duBoef sees ESPN as the boxing “home for fans in the United States.”

He hopes Top Rank’s enhanced slate of shoulder programming that will arrive in the not-too-distant future will ensure that no matter what platform is showing the best fight that night, fans will turn to ESPN to follow along.