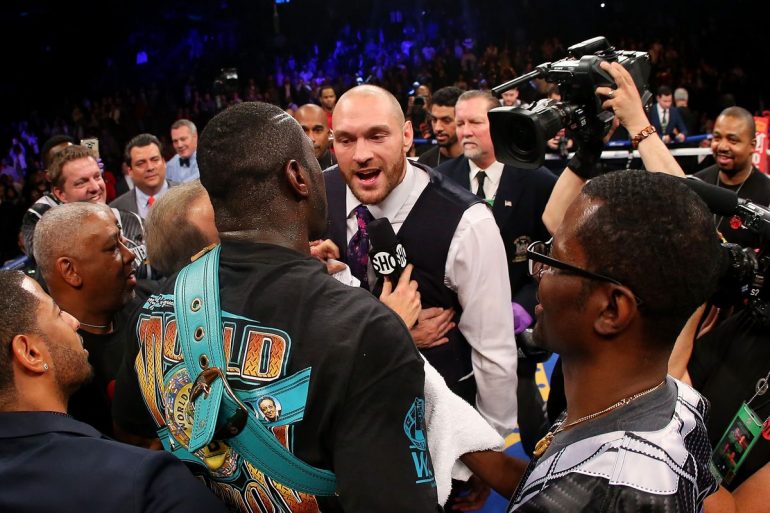 After three-and-a-half months of negotiations, an undisputed heavyweight championship fight with Anthony Joshua never materialized. The heavyweight titleholder felt like Eddie Hearn and Joshua wasted his time by drawing out talks over a fight he believed they never wanted in the first place.

But now, Wilder is inching closer to another super fight: a bout with lineal champion Tyson Fury in December that would take place in Las Vegas and be broadcast on Showtime Pay-Per-View.

Wilder (40-0, 39 knockouts) chatted with The Ring on Tuesday in his first interview since Fury revealed the negotiations, and he’s ultra confident that this time, talks for a big-money showdown with a heavyweight champion from England will reach the finish line.

“I believe 100 percent that this fight is going to happen and it’s going to get done,” said Wilder, 32. “We’re very, very close. Very, very close. Closer than Joshua and me could ever get in a lifetime. It’s definitely gonna happen, there’s no doubt. There’s just a little more work to be done.

“Me and Fury, we talked with each other back and forth; I think he’s a great guy, we have a relationship together, and my team has a relationship with his team.

Fury (26-0, 19 KOs) won the lineal championship when he scored a massive upset decision victory over Wladimir Klitschko in November 2015. But he never defended the three titles he picked up, nor The Ring heavyweight championship. Instead, Fury battled depression and cocaine addiction and ballooned to around 350 pounds.

The 29-year-old has since proclaimed himself sober and healthy, and he returned with a fourth-round stoppage of Sefer Seferi in June. On August 18, Fury will knock some more rust off with a bout against Francesco Pianeta, another made-to-order journeyman.

At his best, the 6-foot-9 Fury is an awkward boxer who presents a difficult challenge. He can box and move, and he’s incredibly fleet of foot for such a large man.

He’s also one of the most charismatic heavyweight champions of all time, and combined with the larger-than-life personality of Wilder, the promotion promises to be one for the ages, assuming the bout is finalized.

“I’m super excited, I can’t wait for this thing to be official and we can get the promotion going and get the fans riled up for it,” said Wilder, a 32-year-old from Tuscaloosa, Alabama. “I feel he’s going to be back into his top form, he’s in shape, he’s slimmed down, he’s been a champion before, he knows what it takes to be a champion, to adjust to other fighters.

“Once you’re a champion, there ain’t no excuses. You’re staying ready 24 hours and if you’re not ready that’s your fault. And that’s what I’m all about.

“He’s a guy that’s ready to go, he’s seen what’s been happening to me with this whole situation, and he’s disgusted because Joshua is British as well, and they see he didn’t want to fight. So he’s being a man, stepping into my backyard and doing something their other so-called champion wouldn’t do, so mad respect from me.”

The mutual admiration began after Wilder, widely considered the sport’s most devastating puncher, scored a spectacular knockout of Artur Szpilka in January 2016. Fury rushed the ring, and they exchanged trash talk, whipping fans into a frenzy for a meeting between the two, but it never happened.

Still, the 6-foot-7 Wilder says that was the beginning of their friendship. He called Fury “a great guy” and said he appreciates “what he stands for … he doesn’t let anyone puppet him around.”

Fury, The Ring’s No. 10 heavyweight, has been adamant that Wilder would knock out Joshua, and in this case, the old adage that “the enemy of my enemy is my friend” rings true.

Joshua is fighting Povetkin on September 22, but Wilder-Fury will be a far more highly anticipated bout, and the winner will see their profile and resume raised considerably ahead of any talks for a meeting with Joshua next year.

“He’s ready now, I’m still ready and we’re going to put on one of the biggest heavyweight title fights in boxing. We got two talkers that’s going to promote the sh– out of the fight.