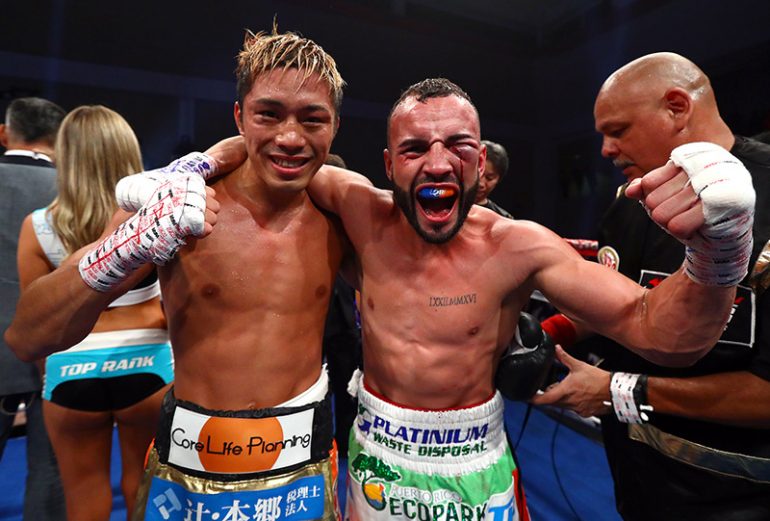 Masayuki Ito made a promise to himself and his wife that he would return to Tokyo with some extra gear in his luggage—the WBO junior lightweight title belt. About the only ones who believed that may have been Ito, his corner and the handful of family and friends that made the trek from Japan to the highly partisan Kissimmee Civic Center in Kissimmee,Florida—which had been kind of a home away from home for Puerto Rican contender Christopher Diaz.

So much for the home-ring advantage.

There was no shock, no one yelling “robbery,” and even Diaz himself clapped before the final verdict was read Saturday night because Ito left no doubt. He won a rather lopsided decision to claim the vacant 130-pound belt, handing the rugged 23-year-old Diaz (23-1, 15 knockouts) his first professional loss in the process. 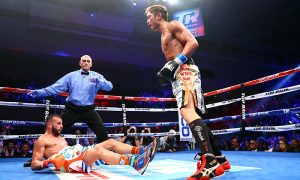 But Ito’s punches were heavier—and devastating. One look at the discolored left side Diaz’s face was proof of that. In the fourth round, a looping Ito right spelled the only knockdown of the fight.

Though Ito (24-1-1, 12 KOs) was two-and-a-half inches taller, and had a dominant four-inch reach advantage (68-to-64), it was Ito who initially smothering the shorter Diaz from slamming power shot by fighting close in.

Ito was winning the range game in the opening two rounds.

But in the third, Diaz stepped back to open up more, landing good shots to the head and body. Still, Diaz couldn’t avoid Ito’s lengthy jab and swelling began to occur under his left eye. The two had a spirited exchange in the fourth, when Ito felled Diaz with 1:32 left in the round with a looping right to left cheek, set up by a right, and then a left to the head.

Diaz did come back to land a big left hook in the fifth, but after five, it seemed Ito was in a good position to win. He remained calm during the sporadic times Diaz charged forward with winging left hooks, and during the times Diaz did connect, Ito appeared unfazed.

Sensing the fight slipping out of his hands, Diaz increased his work rate in the ninth, though by then it was too late. Diaz fought the last two rounds with his left eye swollen shut, after absorbing what seemed like dozens of Ito rights.

On the undercard, veteran Gabriel Bracero, 37, pulled off an upset, arriving on late notice as a replacement for Carlos Adams to stop Artemio Reyes (25-3, 20 KOs) in the fifth round of a scheduled 10-round welterweight fight. Bracero (25-3-1, 6 KOs) ended Reyes, who had his 10-fight winning streak shattered and who hadn’t lost since 2012, with a liver shot.

Russian 2016 featherweight Olympian Vladimir Nikitin (1-0) made his pro debut with a six-round unanimous decision over Edward Kakembo (10-5, 2 KOs). Nikitin, who knocked down Kakembo twice, won the bronze in Rio de Janeiro. Some may remember him as the fighter who benefitted from a controversial decision at the 2016 Olympics over Michael Conlan, inspiring the Irishman to famously rage at the judges and amateur boxing.